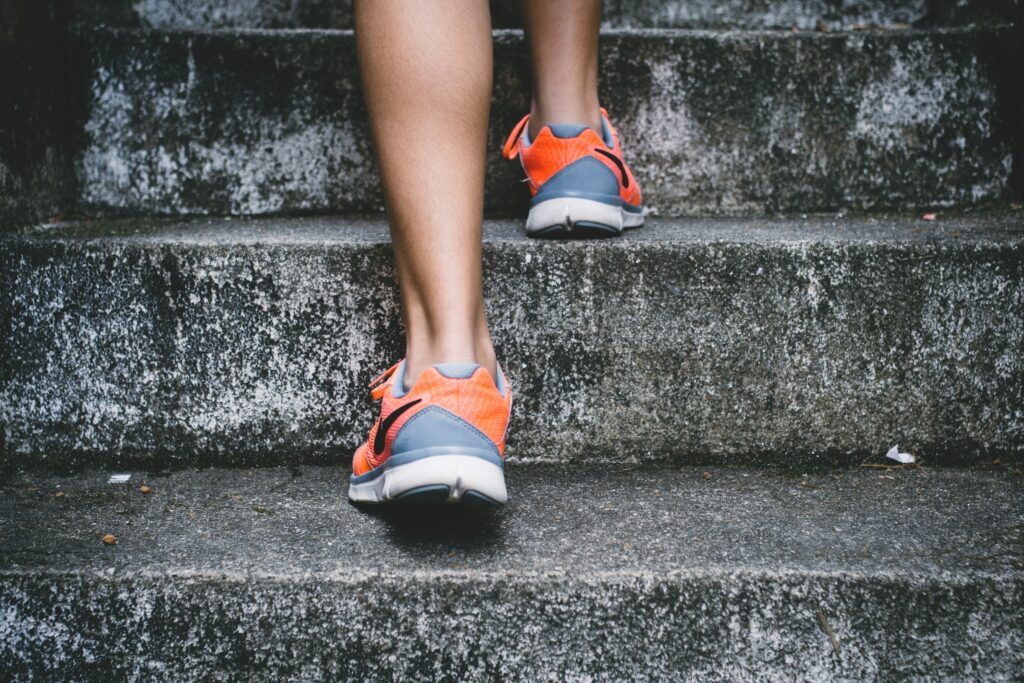 My relationship with fitness is…complicated. I have never been athletic. My history with sports consists of exactly one year of soccer when I was 8 and a week-long tennis camp in middle school (which I mainly enjoyed because I had a crush on one of the instructors). I hated PE class because it consisted mostly of humiliating team games. In high school, I participated in activities like marching band and show choir, which, while not vigorous, were fairly active. In college, walking to my classes kept me in decent shape.

I’m a big believer in body positivity. All bodies are beautiful: fat bodies, thin bodies, short bodies, tall bodies, young bodies, old bodies, disabled bodies, able bodies. All bodies of all colors. I love seeing more and more advertisements featuring models with diverse body types, and I would never think of someone as being less worthy because of their weight. But while confronting my feelings after gaining 30 pounds and outgrowing some pants, I realized that the body positivity I openly espoused included everyone except me.

RELATED: How I Found Self-Worth Without Checking the Scale

For several months, I felt the best way to prove my self-love was to continue as usual and make no attempt to lose weight, get fit, or eat healthier. I was stuck in a paradox where loving my body and building healthy habits seemed like two mutually exclusive options. And as much as I tried to love my body just the way it was, I didn’t feel well. I became more lethargic, moody, and critical.

Eventually, I was desperate to try something different. I knew I needed to change my mentality. In October, a Facebook ad kept popping up on my feed: A local gym offering a free six-week fitness challenge. I stopped by the gym to learn more about the terms, and of course, it wasn’t exactly “free.” I had to pay a deposit that would be returned to me if I met the conditions of the program.

I impulsively signed a contract and paid the deposit.

I panicked on the drive home, already feeling embarrassed about falling into a marketing trap. The main requirements of the challenge were to attend three group fitness classes per week and follow a strict nutrition plan. I would also have weekly weigh-ins to track my progress.

I attended my first class the very next day. At 5:30 a.m. I proceeded to attend 5:30 a.m. classes three days per week for six weeks.

I followed the nutrition plan, loosely. I didn’t want to experience six weeks of miserable, crash diet-style restrictions; I was more interested in creating sustainable healthy eating habits. This meant less pizza and fewer donuts, and more Greek yogurt, kale and sprouted grain bread. But I snacked between meals even though the plan said I shouldn’t.

With each passing week, I experienced small changes. I was sore, for one. The group fitness classes were HIIT (high intensity interval training) circuits, and they were challenging. I was used to a mainly sedentary lifestyle, so these new exercises made my muscles ache. But I felt stronger. And surprisingly, I discovered I didn’t dread working out. I didn’t even dread waking up at 5:10 a.m. Did I fall in love with burpees? No. But the classes were fun and challenging, and it was exciting to use my body to do things I didn’t know it could do (like seemingly endless planks).

The bigger change was my attitude. When I attended my first class, I was terrified about what other people would think of me. I had to give myself a pep talk — out loud — in the car before going into the gym that first morning. Much to my surprise, no one at the gym judged me — not the instructors or the other people in the classes. No one was competing with me. Everyone was sweating and working hard and getting after their goals. The people I met in classes were kind and supportive, and I actually looked forward to seeing my 5:30 a.m. workout crew three times per week.

From the start, I didn’t want this challenge to be about weight loss. I wanted to be healthier, stronger, and more energetic. However, this particular program included weekly weigh-ins and a fixed weight loss goal for all participants. In order to successfully complete the program (and receive my deposit money), I was supposed to lose either 20 pounds or 6 percent body fat in six weeks. I did some research and quickly realized that goal was extreme and unrealistic. As the program progressed, I knew I would not achieve either of those predetermined targets.

I failed the challenge.

But I decided that was okay. In fact, I decided that was good. Instead of making myself miserable to reach some arbitrary number on a scale, I focused on enjoying the process of seeing what my body is capable of. I lifted weights and did planks. I ate more vegetables. I learned that exercise doesn’t have to be a competition with my peers, and it doesn’t have to be a punishment. And “losing” my deposit money helped me realize that investing in my health actually was a priority for me.

Luckily, I didn’t really lose the money I spent on the challenge. The gym manager offered to put that money towards a few months of personal training with one of their fitness coaches, so I have been meeting with a trainer a few days each week and focusing on gaining muscle and self-confidence.

During the six-week challenge, I lost around five pounds, and I gained some of that back over the holidays. The number on the scale has barely changed, but the other changes are immeasurable. My body feels different, and I definitely feel different about my body. I am no longer seeing myself as the “before” picture in a dramatic before-and-after fitness transformation. And I’m finally including myself when I think about body positivity.

If I had “won” this fitness challenge, I know I would begin to see the number on the scale as the primary measurement of health and worth and success. Instead, I started to learn healthy, sustainable habits and thought patterns surrounding exercise and eating. And I started to affirm my body’s inherent worth.