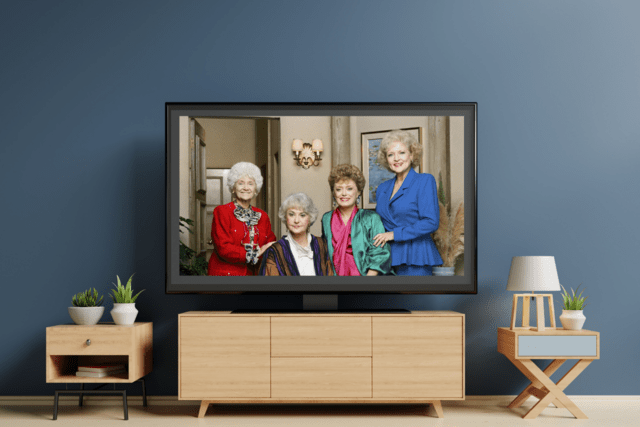 Late one night after watching the news and discovering that my usual late-night TV shows were reruns, I scanned through the channels. As I flipped to find the familiar faces of four older ladies sitting around their kitchen table eating cheesecake and chatting, I paused. Suddenly, 30 minutes had passed and my mood was lighter thanks to Blanche, Rose, Sophia, and Dorothy.

RELATED: What to Watch While You’re Curled up Inside This Winter

I’ve seen “The Golden Girls” reruns hundreds of times — not unlike “Seinfeld” and “Friends.” Yet, the jokes are still funny to me and the storylines are still engaging, even when — or perhaps especially when — they are predictable. Because old TV shows remain in syndication for so many years, I know that I must not be alone in my sentiments, and that classic TV still brings joy both to me and to millions of others.

Watching familiar TV shows can feel like checking in with old friends — quite literally. From the moment the “Friends” theme song starts, the mood is set. The forever catchy lyrics of “So no one told you life was gonna be this way… ” reminds me that someone really will be there for me — at least from the other side of a TV screen. During challenging times, this predictability and familiarity can be comforting. Will Phoebe sing a song about her smelly cat? Will Monica want to clean and organize? Of course.

Similarly, characters in other old sitcoms adhere to familiar patterns and themes — like friendship or family — for the duration of both individual episodes and throughout the series as a whole… Dorothy and Sophia from “Golden Girls” have had to learn to relate to each other as adults — and, sometimes, the role of parent and child becomes less defined. Dorothy looks after her elderly mother who doesn’t think she needs looking after. And Sophia still expresses maternal affection towards Dorothy, often saying “Goodnight, Pussycat” as Dorothy turns off the light and leaves Sophia’s room. We relate to these kinds of characters not because they are perfect, but precisely because they are flawed, but still loving — like we are. So, watching them feels soothing.

RELATED: Why These Classic 2000s Shows are Worth Rewatching

Lately, I’ve been catching “Seinfeld” reruns on a regular basis. As opposed to “Friends” and “Golden Girls” where I can catch glimmers of myself, I relate to “Seinfeld” differently. The main characters on “Seinfeld” — the witty, dry comedian Jerry who always has some keen observation about the world, the lovable loser George who is always trying to better his life, albeit in questionable ways, the quirky Kramer or the sharp, perpetually exasperated Elaine who hangs with guys — are exaggerated caricatures.

I don’t know anyone like them, or at least I hope I don’t. I can’t envision any of my real-life friends running down a city street to steal a loaf of marble rye bread from an elderly woman who just snagged the last one at the store, like Jerry did. And, I would be hard-pressed to pinpoint which, if any, of my friends (again, hopefully none) would end up addicted to fried chicken made by a fast food restaurant owned by a country music star, as Kramer did.

The escapades on “Seinfeld” are typically over-the-top, but as with “Friends” and “The Golden Girls,” these characters are relatable when their humanity is revealed. Most of us have friends or relatives we may consider quirky, others who are naturally funny and always ready to crack a joke and some who are steadfast and reliable. In “Seinfeld,” Jerry calls out idiocy when he sees it, but he does it deftly and with humor — not so much to admonish his friends for their antics, but give them a different perspective. Like with my besties, the gang on “Seinfeld” generally wants each other to thrive — even when they don’t understand their friends’ choices. (Couldn’t Jerry just have gone to a different store to find bread? We’ll never know.)

When I tune into familiar shows, it also feels to me like the opportunity to tune into different parts of myself — even if they are only aspirational or imaginary. I went through a phase of watching detective shows from the 1980s and 1990s like “Charlie’s Angels,” “Hart to Hart” and “Magnum, P.I.” At the time, I was experiencing a health crisis that was a medical mystery and it was comforting to be reminded that eventually, many mysteries can be solved, even if it takes longer than an hour. Television can help us find hope and the tools for perseverance through the power of storytelling.

Nostalgic TV shows are easy entertainment that can offer a form of respite from daily life. The characters’ voices and even the settings are almost always the same. They feel like home and invite us, through watching, to tune into the spaces within ourselves where we can laugh, reflect and dwell. Many forms of entertainment, especially TV shows, have always given me this kind of escape, this unique kind of solace. And, I’ll continue turning to these “friends” over and over again because of it.