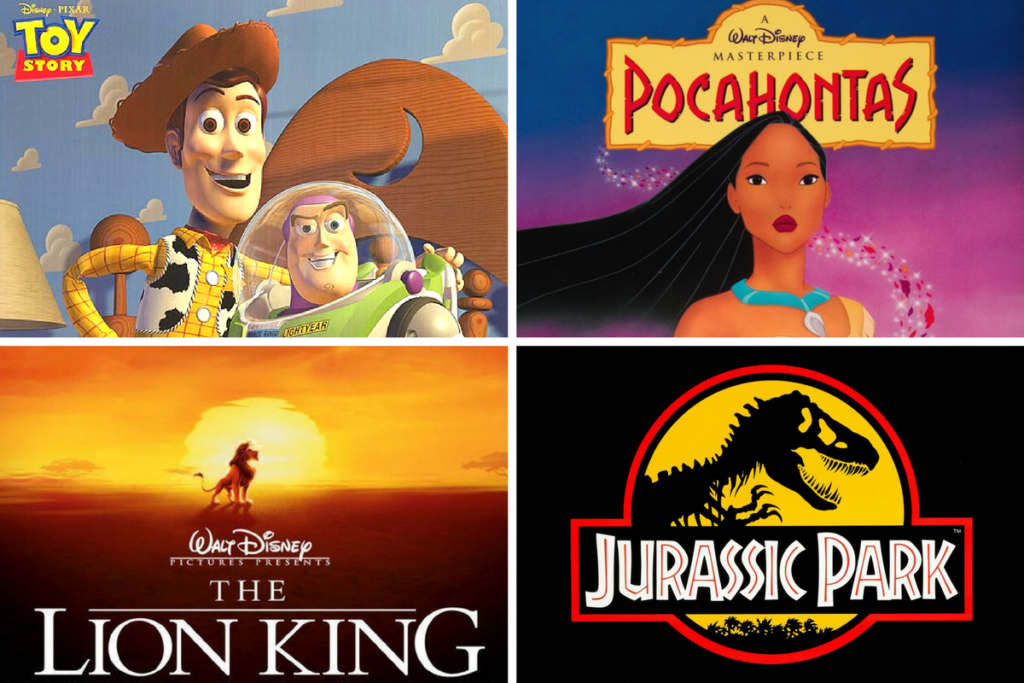 It’s the one wish every 20-something has, to go back in time and relive your childhood, with the naps of yesterday and the carefree life that came along with it. Unfortunately, time travel isn’t a thing yet, and the closest experience we have to it are our memories. One way to help trigger that nostalgia is through film. While movies today have the power to transport us to different worlds, movies from years ago can bring us right back to the place where we first saw them. Here are a few movies that will take you back to the days of light-up Sketchers, Furbies, and Game Boys.

“Pocahontas” was the movie that gifted us not only with songs like “Colors of the Wind,” but also with a timeless message to hold onto. The central theme was not to judge others just because they live a life different than yours – a message becoming more and more relevant now with racial and political tensions continuing to climb. In times like these, it’s important to remember that people have different practices and face different struggles, but we’re all human. Pocahontas said it best in the movie’s leading song:

Full of special effects that were way beyond its time, “Jurassic Park” was the movie that made paleontology cool. The feeling I got as a child watching a living, breathing dinosaur walk across my screen was unforgettable, especially when the closest thing we had to it prior was the “Land Before Time” series. Hearing the roar of the Tyrannosaurus Rex and seeing the height of a Brontosaurus filled every kid with so much amazement that it’s no surprise the film is a common throwback favorite among 20-somethings. The response from the film even sparked a few sequels in 1997, 2001, and all the way up until 2015 with “Jurassic World.”

Seeing the best special effects of the 1990s will have you feeling all kinds of nostalgic…and hopefully spark some ideas for more movies to add to your list this summer.

In hindsight, a movie that we probably shouldn’t have been watching as kids turned out to be an iconic film from our generation. Jim Carrey plays one of his most animated roles to date as his character Stanley Ipkiss finds a mask possessed with a trickster god and becomes quite the unconventional hero. The movie is full of slapstick comedy that made you laugh out loud.

It’s ideal for watching with a few friends, but be ready, giving the movie a once over after all these years will have you picking up on jokes that were probably meant for our parents.

“The Lion King” is filled to the brim with important lessons that any 20-something today can take home. The biggest message behind the animated flick was “Hakuna Matata,” like the song states – the Swahili saying simply means “no worries.’ Although you can be overwhelmed and concerned with today’s problems, it’s important to let go of what’s out of your control. The “problem-free philosophy” is something a lot us can stand to be reminded of on a regular basis.

One of the most memorable movies of our childhood, “Toy Story” is nothing short of cinematic gold. Revolving around Woody and Buzz, who start off on the wrong foot but end up working together, the movie is a testament to working past each other’s differences for the greater good. Whether you have a conflict with a co-worker or have trouble relating to family members with different views, it’s important to keep in mind that it’s often better to work together than against each other if we hope to achieve anything.

The franchise eventually gave us two more movies with a confirmed fourth film on the way, all of which would make for quite the Saturday movie marathon.

There’s no doubt that movie theaters will entice you with their own must-watch films in the coming weeks. The new characters and CGI-filled scenes might even tempt you to buy a ticket for a Thursday night midnight showing. But nothing compares to popping in an old DVD on a Saturday morning. And think about it, curling up under the blankets in your pajamas with bowl of cereal and enjoying a favorite movie from the past might just be the break you need from the challenges of adulthood.