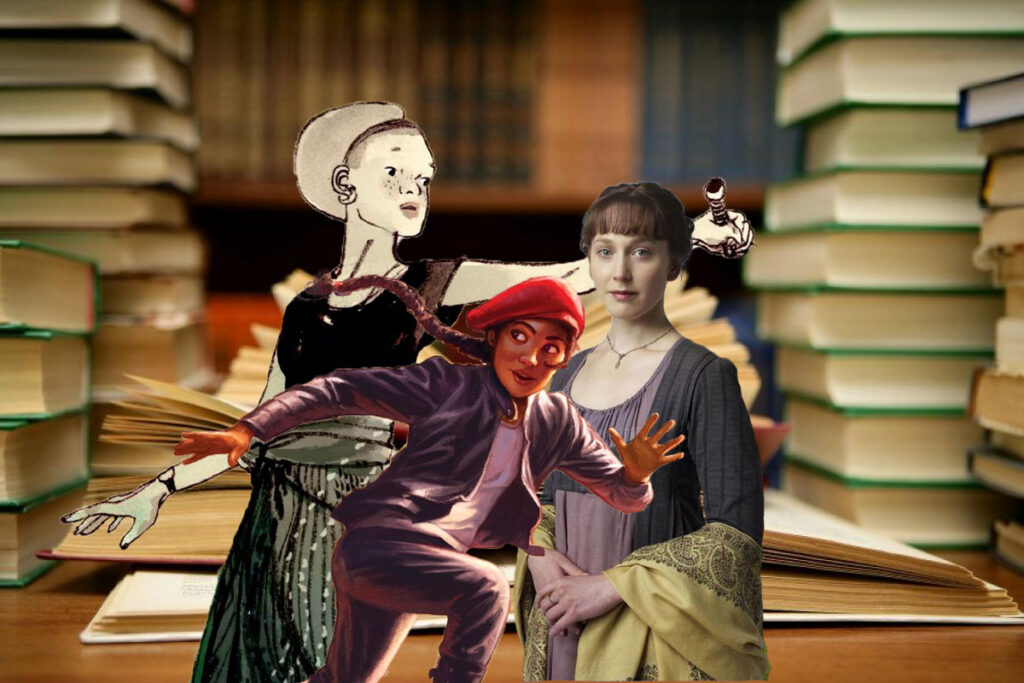 Hermione Granger. Katniss Everdeen. Nancy Drew. Scout Finch. The book world is full of strong, smart, and spunky heroines who we fall in love with. But beyond the A-list book heroines are dozens of underrated (or simply less well-known) female characters who show me all the ways women and girls can be their authentic selves, even when the world around them makes that hard.

This dystopian, gender-bending retelling of the Robin Hood story follows Robyn Loxley, a teen who is trying to save her parents in a coup. She soon learns that her calling is bigger than that. She’s gutsy and loyal, and she learns about the importance of friendship and working as a team.

This Robyn goes beyond the “rob the rich to feed the poor” mentality to embrace a greater sense of social justice. Along her journey, she has to confront the privilege she has from growing up in a position of power. As someone who also has privilege, I appreciate seeing how Robyn models the importance of recognizing your own advantages and working with them to help those around you.

Elizabeth Bennet gets all the glory among Austenites, but Elinor Dashwood is another inspiring Jane Austen heroine. When Elinor’s father dies, she becomes the de facto head of her family, who must adjust to a new home and new company.

Smart, observant Elinor is the rock that holds together the Dashwood family, but she has emotional passion simmering underneath. I wish I was always as calm, cool, and collected as Elinor can be, but she also shows me that sometimes it’s OK — and even necessary — to show your true feelings in all their messiness. And anyone Emma Thompson chooses to portray must be amazing.

The Akata series is often referred to as the “Nigerian Harry Potter.” However, Sunny has a more complicated mixture of identities to juggle: She’s an American-born Nigerian with albinism who’s recently moved to Nigeria and has magical powers in a non-magic world. She must keep her gifts secret from anyone non-magic, including her family.

Sunny has a lot to deal with because she’s always different from everyone around her, and she must learn to trust a whole new community of people. I would be overwhelmed if I had to face as much change in my life as Sunny has, but she uses her intelligence and good humor to embrace challenges and find the advantages of her new situation. Sunny also reminds me of the value of having a supportive, accepting group of friends.

This novel-in-verse tells the story of teenage Artemisia, a budding painter who risks giving up the art she loves most to defend herself in court when a man she thinks she can trust attacks her. Artemisia is dedicated to her craft and knows how talented she is. Also, she’s a real person — the real-life Artemisia Gentileschi was an accomplished 17th-century Italian artist.

Like many writers, I struggle with insecurity, so I admire how Artemisia is confident in her artistic talent and value, and she’s not afraid to keep pushing the envelope. She also shows me that it’s important to be brave and speak your truth, even when it feels hard and dangerous. If Artemisia can speak up for herself, I can speak up on behalf of the people around me.

Let’s hear it for girls in STEM! Dimple is a code-loving girl who gets into a summer web design program and aims to win. Her app idea is a game that helps people, like her dad, manage chronic illness. Along the way, she pushes herself out of her comfort zone and opens herself up to love.

Dimple is smart, driven, and focused on winning, even when it pushes her out of her comfort zone. But what makes her an even stronger role model is that she doesn’t get consumed by work; she also makes time to help her friends — a lesson I remember having to learn in my college years. And refreshingly, I love that she doesn’t compromise her dreams for a guy.

Yes, everyone loves Jo, and maybe I’m biased because I’m the oldest of four (and Meg could be short for Megan), but Meg doesn’t get enough credit. Margaret March, the eldest sister, is the “other mother” in the family who navigates a job she hates, interactions with friends, taking care of the family, and, by the end, becoming a wife and mother.

Meg is often criticized for being vain, but instead, I find her very relatable because, just like her, I struggle with being satisfied with what I have and wishing I had more. I think everyone feels this way, even though the thing we want varies from person to person (nice things, more money, exciting travel … we all have something). As an eldest child, I also can relate to the responsibility she has for taking care of her younger sisters and contributing to the family when they need her.