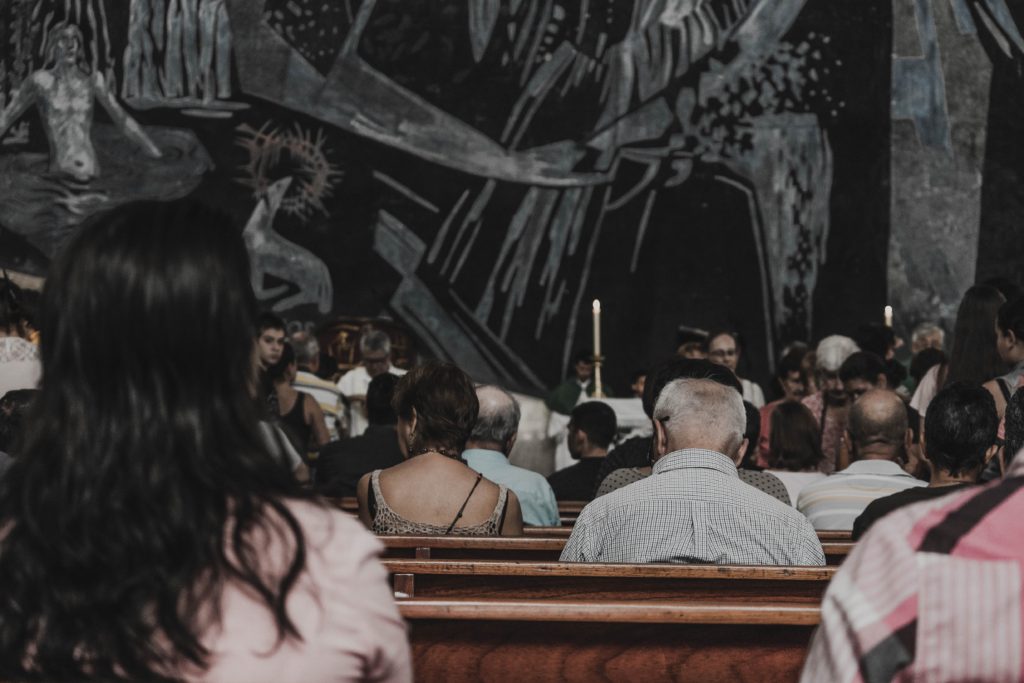 I stood outside of the Wesley United Methodist Church on the corner of Fentworth Blvd in Franklin Square, NY. I reached for the doorknob with one hand as I held onto the stroller that carried my 3-month-old son with the other.

Just one month before, and four weeks postpartum, I suffered a life-threatening hemorrhage, and in my recovery, something was pulling me there. I felt the need to connect with something bigger than myself. Yet, I hesitated. I feared I’d stick out like a sore thumb as one of the few Latinas residing in my predominantly Italian neighborhood. To be quite honest, I’ve never felt completely welcome in Franklin Square. I’ve lived here for four years and my neighbors don’t wave hello. They’ve never engaged me in conversation. Sometimes they don’t even look my way.

Giving in to my fear, I turned around and headed home. The days and months that followed consisted of tending to my newborn son, Evan, sharing new baby stories with my cousin, Yahaira (who also had a newborn at the time), and watching Wendy Williams on TV. For a while there, Yahaira and Wendy were the only two adults that I spoke to; they kept me sane when my body turned on me yet again and I had to take medication for shingles and a hormonal imbalance that could leave me infertile.

For a while there, I thought that they would be enough, and that their company and hilarious stories would pull me out of postpartum depression. It didn’t. I sank deeper into isolation and despair, and I did so quietly. I put on a brave face and feigned strength despite feeling so weak. That is, until I finally walked into the Wesley United Methodist church on the corner of Fentworth Blvd.

It was a spring day, about six months since I first felt called to stop by the Church. Alone this time, I pulled open the door and walked in. A tall, white man with an even whiter mustache greeted me hello. He handed me that day’s pamphlet and motioned for me to sit down. I nodded and chose the seat closest to the door. As I looked around at the congregation, made up mostly of older white men and women with a few specks of brown, I felt a knot in my stomach. Whenever I moved, I felt discomfort.

The service was a blur. Raised Catholic and having almost always attended Spanish-language Mass, I didn’t know the rituals of this church. It was simply the closest church to home. I didn’t own a car at the time, so it was convenient. I kept quiet while the members chanted unfamiliar, Godly phrases. I dodged small talk during “la paz” as not to get too close to anyone. I ditched coffee hour in the church basement afterward because I didn’t understand what fellowship was, and I wasn’t interested in being their fellow anything. I waved goodbye to all, thinking, “I’m never coming back,” when Valerie, one of the church members who kept rattling on about having a Dominican friend and a Dominican chiropractor, stopped me.

“Listen, if you need anything, here’s my number,” she said passionately. I stored her number on my phone and planned to pull away when she said, “It’s going to be alright.”

“I know,” I said all the while thinking, what did she know? What is she talking about?

“I lost my son to drugs 10 years ago and walked into this church soon after,” she shared. “I’ve been here ever since.” I was moved by her testimony. The knot in my stomach loosened. I can’t explain it, but I knew this was God speaking to me through her. And before I could even think about it, I shared my journey. I told a complete stranger about my health struggles, relationship troubles, and unemployment issues. Because, God.

That was all it took for me to become a regular member of my church. I now attend every Sunday, drop in to receive counseling from my pastor, and am involved with their women’s society. I feel calmer and faith-filled, and have an unwavering belief that nothing “just happens.”

God knew what I craved: a family, a community, and a fellowship that stands by me today, two years later. They know my name. They know my story. They lift me up despite our differences. They drew me out of my depression. And now, every Sunday with Evan in tow, we gather and worship and sing Hallelujah inside the Wesley United Methodist church on the corner of Fentworth Blvd.