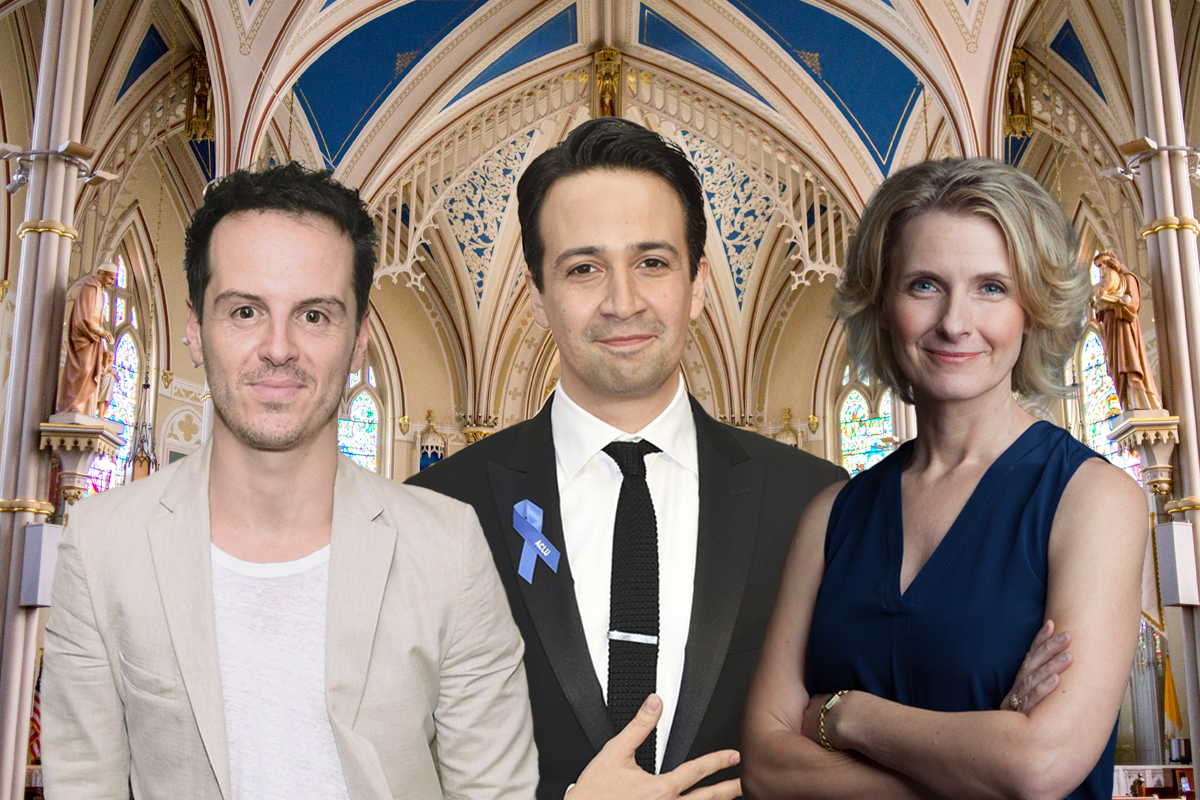 If you grew up within an organized religion, you were probably offered a buffet of spiritual figures to emulate. As a Catholic, I had a literal army of God-adjacent personalities to look up to: not only Jesus, but also Mary, the Holy Spirit, the saints (all 10,000 of them!), popes, priests, nuns and deacons. And those are just the traditional ones. You also have your Catholic celebrities who’ve hit the mainstream: Stephen Colbert, Patricia Heaton, John O’Donohue, C.S. Lewis (ok, he was almost a Catholic, but not quite), to name just a few.

RELATED: 6 Novels to Make You Think Deeply About Faith

These folks show us an example of how to live in unconditional love, mercy, and joy. And the good news is: You can totally find them outside of Church, religion class, and textbooks. Here are some of my favorite modern-day spiritual gurus who I think are worth a follow.

Lin-Manuel is the ebullient, spectacularly gifted lyricist/composer/singer/everything-er behind “Hamilton,” the Broadway musical that launched a phenomenon. And won 11 Tonys, a Grammy, and a Pulitzer. But I love him for so many more reasons than that. He takes up causes, raising money for Puerto Rico after Hurricane Maria. My favorite thing still is his unflagging commitment to joy, hope, and lifting up everyone — not just people in his community, but literally everyone.

For years, he posted joyous, often poignant tweets every morning and night, giving his followers hope and encouragement, and imploring them to be kind to themselves and everyone around them. A sample: “Good morning./Do NOT get stuck in the comments section of life today./Make, do, create the things./Let others tussle it out./Vamos!” Eventually, he collected the tweets into a book, “G’Morning, G’Night!: Little Pep Talks for Me and You,” featuring the tweets and adorable illustrations by Jonny Sun. I personally believe everyone should have a copy on their nightstand.

This organization pairs non-religious young people (“Nones”) and Catholic nuns as roommates. The program came about when Adam Horowitz, a 32-year-old Jewish man, and his friends were exploring communities that live in radical alignment with their beliefs, like a religious order living together. From there, a group of young people in the Bay Area moved into the convent of the Sisters of Mercy. They had meals together. They went to the Easter Vigil. They held Shabbat dinner as a community. They talked about their spiritual practices (the Nones were, like many of us would be, *very* curious about those vows of poverty, chastity and obedience.) One of the “Nones” even started going to daily Mass.

There are now Nuns and Nones programs either running or starting up in San Francisco, Boston, Pittsburgh, Minneapolis, New York City, Washington D.C., Grand Rapids MI, Cincinnati, Chicago, Philadelphia, and Madison, WI. And they’ve created an organizer toolkit for anyone wanting to explore the experience in their own communities.

RELATED: Seeking Guidance: How a Spiritual Mentor Could Help You

For their total-life commitment to living in line with their value systems, every member of this organization is a guru to me. I’ve often dreamed of upending my life by joining a community committed to social justice or spirituality. Nuns and Nones shows that it’s possible, and you don’t even have to quit your day job to do it. The members’ commitment to thoughtfully exploring beliefs that they don’t necessarily share is a profound example of acceptance and unconditional love that our polarized culture sorely needs.

The Hot Priest from Fleabag

Hear me out! Does he do some distinctly un-priest-like things? Sure. But he also leads Fleabag to several encounters with the divine power he believes in. He has flaws — he’s afraid of foxes, he doesn’t care much for babies, and he drinks perhaps a little too much. But he also creates a space for Fleabag to be heard, to experience compassion, and to begin to heal from the losses she’s experienced. He shows her mercy, and delivers a damn good homily on the essential hopefulness of love.

Oh, how I love you, Liz! Anyone who’s read “Eat Pray Love” already knows that Elizabeth Gilbert has a deep belief in a higher power. But if you follow her on Instagram, you’ll find that she shares that belief, and encourages others in the pursuit of truth and beauty, nearly every day. One day, she might share one of her own doodles, which features the message, “Put everything, everything, everything in the hands of God.” Another, she’ll share a reassuring quote from Mooji, a meditation teacher: “But what was your biggest problem three problems ago?” In addition, she regularly supports Together Rising, an organization founded by her friend and fellow bestselling author Glennon Doyle, that raises money for humanitarian causes. Gilbert lives with a full heart, in a way that I’ve always admired.

I have so many more spiritual gurus than simply those I’ve listed here. For comfort and direction, I also turn to writers Cheryl Strayed and Mary Karr, Buddhist nun Pema Chödrön, poet Major Jackson, and more. Instagram, Twitter, and your local bookstore are bursting with gurus just waiting to be discovered.