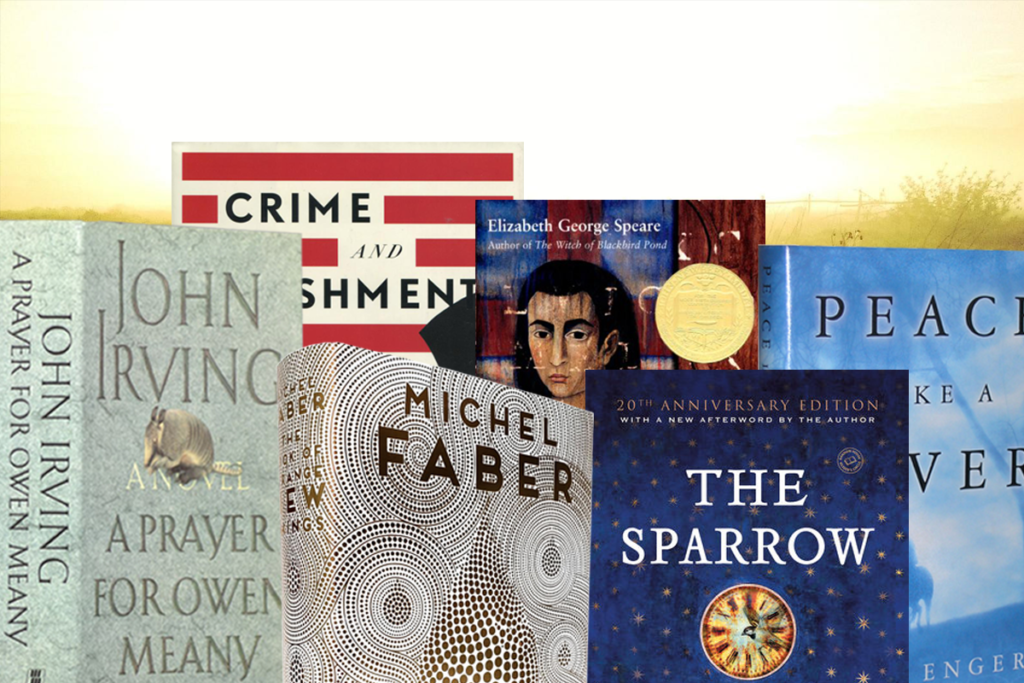 Though I’m a person of faith who loves to read, I’ve never been one for religious fiction. I’m sure there are excellent Christian novels out there, but for me, the idea conjures up images of prophets girding their loins for battle or love stories starring women in old-timey bonnets and long skirts—neither of which is really my jam. On the other hand, I do love a good novel that makes me think deeply about my faith.

For the last nine years, I’ve had the goal of reading at least 25 books a year, and have kept a list of each and every one. Of the 215 books I’ve covered (yes, I counted—nerd alert!) some of my all-time favorites are those that include Christianity in intriguing, even tangential ways, making me consider certain aspects of my beliefs. Here are six that have stood out to me as prompting deep thoughts about faith.

“A Prayer for Owen Meany” by John Irving

Meet Owen Meany, one of fiction’s most lovably peculiar protagonists. This persnickety child stands a head shorter than his classmates and has a voice so grating that his speech is recorded in all caps. And yet, as Owen and his best friend (the novel’s narrator, Johnny) grow up together in 1950s New Hampshire, we learn that Owen is God’s chosen instrument in a dramatic life-saving mission.

Despite his idiosyncrasies, Owen serves as a Christ figure, which always reminds me that God uses the weak to lead the strong—and that I can recognize Christ in anyone. Plus, “A Prayer for Owen Meany” is simply laugh-out-loud funny. (There’s an episode with a stuffed armadillo you don’t want to miss.)

“The Sparrow” by Mary Doria Russell

When you’re millions of miles away from Earth, do the rules and morals of your faith still apply? Are you bound to vows you’ve taken on this planet if you’ll probably never set foot on it again? These are some of the many thought-provoking questions I reflected on because of “The Sparrow.” This sci-fi classic follows Jesuit priest Emilio Sandoz as he embarks upon an intergalactic expedition to a foreign planet. While Sandoz’ assignment is to evangelize an alien species, he can’t help questioning his own faith—and commitment to his priestly vows—in the process. It makes me wonder how my own faith would hold up in the same situation.

“The Book of Strange New Things” by Michel Faber

I know what you’re thinking: Really? Two books about priests and aliens on one list? It’s true that the plot of Michel Faber’s “The Book of Strange New Things” bears similarities to “The Sparrow,” as it also relates to the story of a pastor called to share the Gospel with extraterrestrials. However, the parallels stop there.

This sci-fi novel focuses on the questions of how Christianity might apply to beings on other planets—something I’ve always pondered myself. And as the novel’s hero, Peter, glories in his spiritual quest, his wife languishes back on Earth without him. For me, this is food for thought about how getting too caught up in spiritual things can lead to neglecting important earthly commitments. Sometimes I realize I can focus on polishing up my own faith instead of ministering to someone in need in my own life.

“The Bronze Bow” by Elizabeth George

In this YA fiction novel, Jesus is featured as a character, rather than the star, of the plot. The novel’s protagonist, young first-century Israelite Daniel bar Jamin, has joined forces with a roving band of outlaws who hope to drive the Romans out of their homeland. Jesus exists as a figure in the periphery, as word of his teachings of love and forgiveness reach Daniel gradually.

I love the idea of considering Jesus from such a unique angle. After all, he was a human being—I’m sure he played a casual or distant role in many people’s lives during his time on Earth. Reflecting on this reminds me that, through his presence in my life, Christ could impact someone else, even from a distance.

“Crime and Punishment” by Fyodor Dostoevsky

“Crime and Punishment” isn’t exactly light reading, but if you have the time to devote to this 19th century masterpiece, it’s well worth the investment. I devoured the story of Rodion Raskolnikov over one college Christmas break, and years later, I still think about its lessons. Sin, forgiveness, redemption, and justice are all covered in this tale of one man’s descent into madness after committing a violent crime.

Murder, miracles, and the Midwest—you’ll get plenty of each in Leif Enger’s page-turner “Peace Like a River,” a family drama set in the Dakota Badlands. Even though this novel deals with some grisly topics, it somehow manages to convey the wholesome take-home that God is in control. I’m always comforted by its message. No matter the circumstances, I can trust that someone bigger than me is calling the shots.