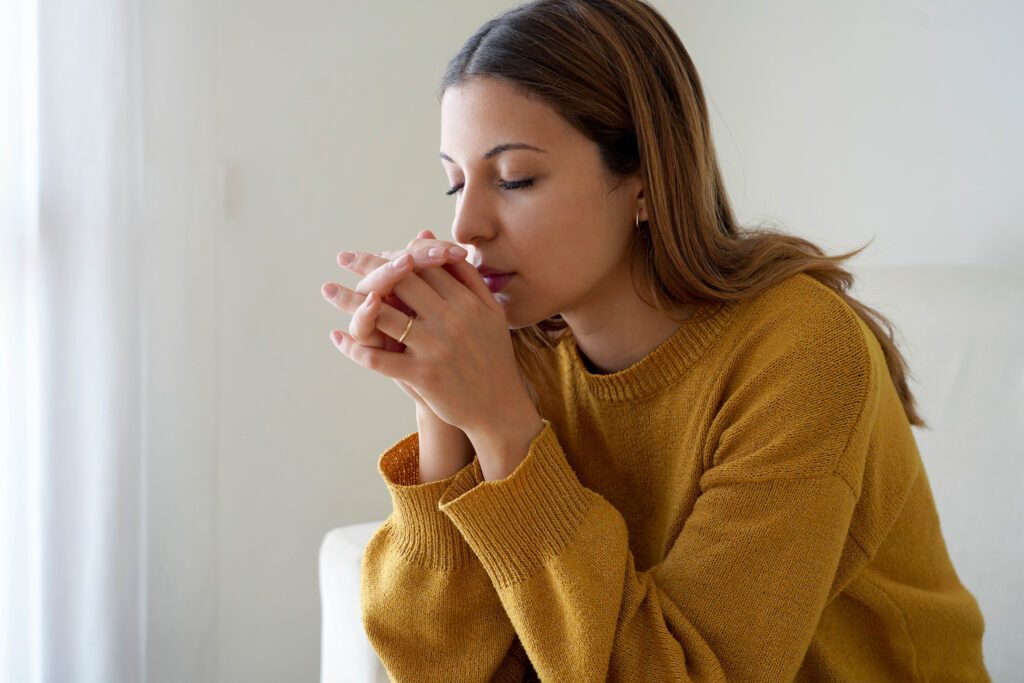 Two and half years into my relationship, I started dating my doubts and my boyfriend at the same time. As Sean and I would lay watching his beloved Sunday football, I’d wonder why I was sitting through something I didn’t care for. When Sean would bring up Thanksgiving travel plans, I’d fantasize about flying solo instead. When Sean and I would whisper “I love you” to each other before dozing off, I’d question what that even meant anymore.

I met Sean when I was 21. In pursuit of a piña colada, I had dragged my friend into a random bar with a $5 tropical drink special. There, I crossed paths with a tall, bearded Minnesota-turned-Brooklyn man. We started dating immediately.

Sean was everything I hadn’t encountered elsewhere: warm, charming, kind. It was easy to fall in love with him—and easy to become serious with him.

RELATED: 5 Ways to Survive a Breakup with Your Dignity Intact

But after nearly three years together, uncertainty started creeping in. Was this it? Something inside of me craved something outside of our partnership: independence. I felt too young and too curious to settle down, which felt confusing and scary to admit to myself—let alone Sean.

He was happy with our relationship and never hesitated to tell me. I was terrified to share my doubts—or worse, break up with him—because they would devastate him. Breaking his heart felt sinful, so I decided to stay in our relationship instead.

After weeks of silencing my inner thoughts, I began to lose my appetite, my sleep, my desire to do anything at all. My body begged to end the relationship, and when I finally listened to its plea, I was hit by an even stronger guilt as the grown man I loved sobbed in my arms. I had given myself an unfair advantage—time to process—whereas Sean was completely caught off guard.

In the dark days that followed our breakup, I couldn’t shake the feeling that I had sinned—that by hiding my true feelings, they had stung even more when they finally came sputtering out. I cried thinking we’d never see each other again, and I cried thinking of Sean crying even more. I had broken him by breaking up with him and felt terrible for it. Worse, I started fearing what God would think of me. Had I been cruelly selfish?

It had been over a year since my last reconciliation, and I started feeling desperate to confess. A week after my breakup, I found myself in my local Catholic church stumbling over the words I had once proudly memorized.

“Bless me, Father, I feel terrible,” I poured out to the priest. “I broke the heart of someone I love and failed them as a partner. I didn’t communicate my doubts. I deceived him.”

My eyes started to water. I didn’t care that I had never met this new priest, Father Vincent. I let myself cry. I let myself explain everything that I had hid from everyone else. “I feel so guilty about lying to him, but also so relieved to have finally ended it. I just don’t know how to make this right.”

Father Vincent paused. “Pray for him,” he said at last. “Whenever Sean comes into your mind, say a quick prayer for him.”

As a lifelong Catholic, I was familiar with prayer, but I had never considered praying for an ex. In my breakup grief, I was so hyper-focused on analyzing my relationship moves and Sean’s possible pain that I had somehow forgotten that prayer was even a thing.

RELATED: How I Learned to Get Better at Breakups

Father Vincent’s advice re-shifted my focus. Why agonize over Sean’s presumed suffering when I could wish him the world instead? So I said my Act of Contrition, thanked Father Vincent for his time, and began to dedicate tiny prayers to Sean every single day.

When Sean would pop into my head during a Zoom call at work, I’d think, “God, please let Sean be okay and happy and healthy today.” When I’d lie awake wondering if Sean was doing the same, I’d pray for his peaceful rest. At dinner surrounded by my family, I’d quietly ask God to protect Sean from loneliness. And a month after our breakup, I even surprised myself by starting to pray for Sean’s love life: “Please, God, let Sean meet a wonderful woman who adores him wholeheartedly.”

Whenever I’d think of Sean, I started to find myself softly smiling with each prayer. They were like rays of hope and healing—helping me begin to accept the end of our relationship.

I don’t believe I was right in withholding my doubts from Sean for as long as I did. But I do believe in the power of prayer. While a relationship might end, the love can still persist by wishing an ex the best.