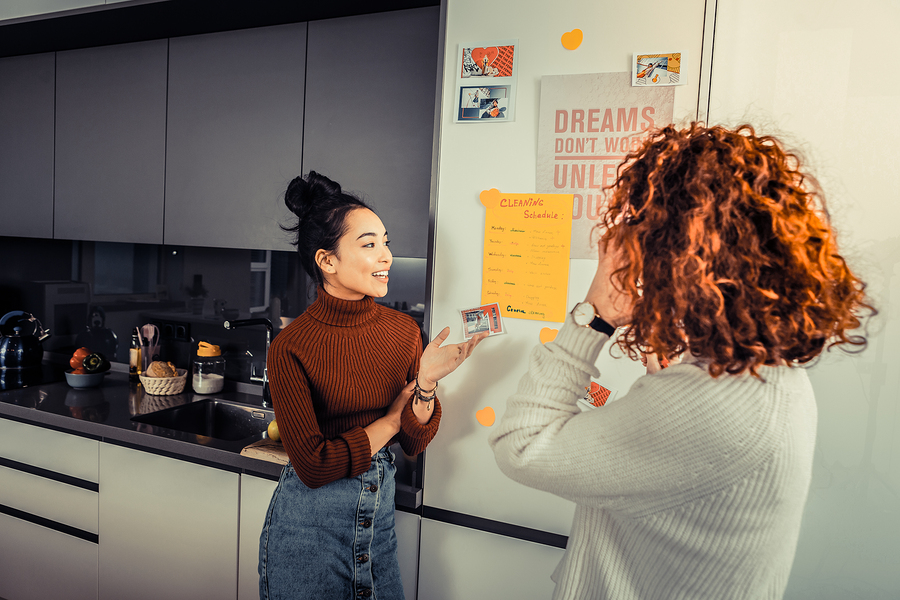 I spent a four-year interlude living in Chicago, where I had a cozy, light-filled apartment all to my own. Everything was exactly as I wanted it: my kitschy, cast-iron dog candlesticks on the West Elm table I’d found on Craigslist. My coffee table books on my dad’s old trunk. My marathon finisher’s medals hanging on the—sorry, what? I’m supposed to be talking about roommates?? Whoops!

So yeah, moving back to New York City—and back in with a roommate—after this blissful solo stint was…an adjustment. Don’t get me wrong: My roommate is wonderful, and I was lucky to be introduced to her by a mutual friend. But moving in with someone new is always a change. Suddenly you have a whole new set of quirks to get used to…all while praying that this new person will accept yours.

RELATED: Your Post-College Guide to Living with Roommates

Here’s the thing, though: Getting to live with someone new can be fun. You never know what you’re going to have in common, and that’s exciting. Here are a few ways you can peel back the layers of potential awkwardness, and quit walking on eggshells, to adjust to your new co-living partner:

It may sound obvious, but this is the hardest, and best, thing you can do. If there are things you do all the time that you fear may seem strange to someone else—you’re gonna have to get over it. For example, I am a non-Spanish speaker who listens to A LOT of Spanish music. I’m always  secretly afraid that people will judge me for it, accusing me of being a cultural dilettante. But the fact is, I love it and I’m not going to stop listening. So during the earliest days in my new apartment, I stuck to my routine of playing Mon Laferte and Natalia Lafourcade while preparing dinner. And guess what? Ashley didn’t give a hoot. Because listening to music is quite a normal thing. And she liked Mon Laferte! (Because who wouldn’t?)

In the early days, use your moments together to make conversation, but don’t force it. During the first two weeks of my new tenancy, I was in way over my head with freelance projects, working morning and night. Ashley tiptoed around our apartment, being careful not to disturb me. After a couple of days of this, I realized that my workaholism was threatening the foundation of our new relationship. So I shut my computer and started talking. As soon as Ashley and I started having conversations, we set the tone for how we’d engage with each other: easy, open, and undemanding.

Set clear expectations about housekeeping details early. Who’s paying the utilities bill each month? Are you going to take turns buying paper products? Be direct—and it helps if you come to the conversation prepared with suggestions: “Just wanted to ask how you’d like me to pay for my half of the utilities bill—should I Venmo you? PayPal?” This stuff feels tedious, but it’s important to get it out of the way up front. That way, you don’t have to continually have awkward conversations about who’s paying for what. And the time you spend in each other’s company can be used getting to know each other.

The month after I moved into my new apartment, Ashley’s birthday rolled around. I decorated a bookshelf in the living room with a birthday banner, a bouquet of flowers, and a case of her favorite La Croix. It didn’t cost much money, but it let her know that I was thinking of her and invested in making her day special.

Set aside time for the exclusive purpose of just hanging out together. Go to a bar in your neighborhood, order dinner in and watch Netflix, or cook brunch together one weekend morning. It’s important to do this stuff; otherwise, your roomie relationship starts to feel transactional, with every conversation focused on housekeeping details about who’s taking out the trash.

The way Ashley and I interacted in the early days set the tone for our roommate relationship. We’re not best friends, and that’s totally cool. We respect each other and the space we live in, and we work toward the shared goal of maintaining a clean, peaceful home. Knowing that we’re on the same page makes the whole endeavor so much less stressful.