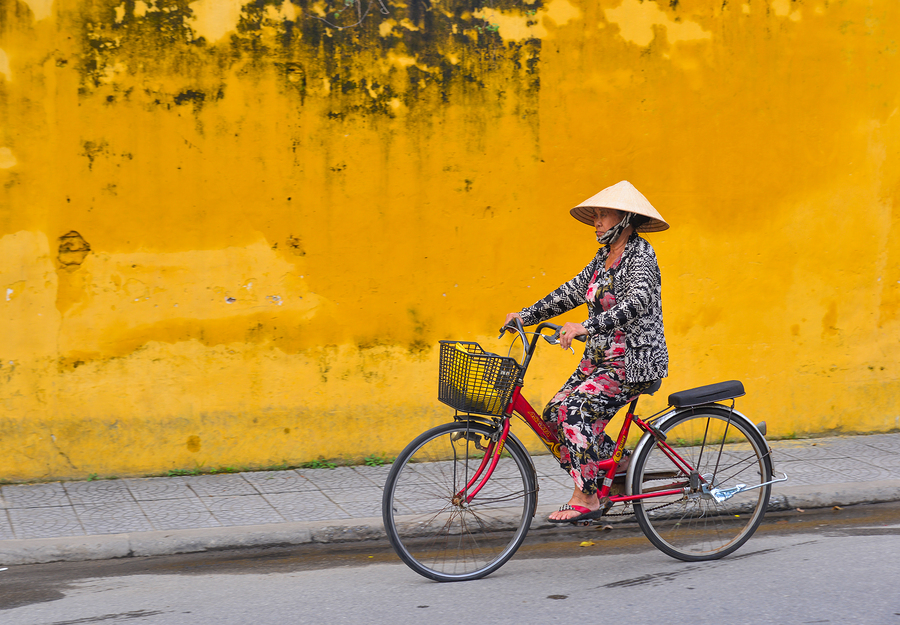 It’s not easy confessing a mistake or apologizing for an insult. It’s particularly difficult when you don’t speak the same language as the person you’ve offended.

My cultural misstep occurred shortly after I met Nguyen Tan Vinh on a recent trip to Vietnam. Vinh lives with his family — his wife, two sons, and two daughters — less than an hour outside of Hội An, a popular tourist destination in Southeast Asia.

I was in Vietnam with a team from Catholic Relief Services (CRS) to document stories from farmers like Vinh who are forced to respond to the growing threat of climate change. We spent the better part of a week with his family, accompanying him and his wife, Tien through their daily routine.

It’s obvious that Vinh and Tien are a team: They work in the fields, tending to their rice together, they care for their children together, and they participate in community meetings together. And this is all the more impressive in a Confucian culture, my local colleagues explained, where familial roles are highly gendered and highly structured, the woman subservient to the man.

So, I felt uniquely incompetent when I failed to mirror this relationship and instead prioritized Tien’s story over Vinh’s. Fascinated as I was with this strong, resilient woman, I spent the better part of an hour interviewing her — hearing her stories and learning her dreams for her children — before declaring that we had enough content for the day. Did we need to interview Vinh, too? No, I said. We got what we needed from Tien.

Not 10 minutes passed before I realized my mistake: Tien had become distant, agitated. In my eagerness to lift up the voice of an undeniably impressive woman, I had insulted her husband, a man who had also joined us under the hot Vietnamese sun for hours in the field, who had welcomed us into his home, and who had equally inspired dreams for his children. My Western lens wanted to focus on the woman’s story, but I had forgotten that this was not my country, not my home, not my culture. And I had insulted my hosts.

RELATED: How to Handle a Mistake

How does one recover from a moment such as this? First, I had to be honest about my mistake. In the moment, that meant confessing to my teammates and getting their input. I had to go to Tien and ask him for his time, for his thoughts. I had to take what steps I could to fix it. It clearly wasn’t possible to go back in time and reorder the interviews, but it was possible to give Vinh’s story its due, to spend as much time and energy with him as I had with Tien.

More than that, I had to really listen to what he had to say, which meant ignoring my list of interview questions to get to the heart of his story, which was, of course, the point of the trip in the first place. I had gotten so caught up in my angle on the story that I had failed to approach this family as they were: Real people living real lives with real challenges not so different than my own.

Listening to Vinh describe his dreams for his eldest daughter reminded me what I want for my own daughter, Elianna. The pride in his voice as he listed off her accomplishments made me think of what the future holds for my family. And his honest, blunt assessment of where his children have already surpassed him made me wonder how Elianna’s education would form and motivate her. Different cultures, different languages, but near identical sentiments.

Cultural missteps can be catastrophic, and cross-cultural communication can at times seem daunting. We sit across from someone on the bus who speaks a language different than our own, and we inadvertently call attention to that fact by attempting to start a conversation. We meet a new person and go in for a hug, when a handshake was already more touchy-feeling than that’d hoped for. We bring up a topic we find light-hearted only to discover we’ve touched some cultural nerve.

But — cliche as it is — we often have more things in common than not. And the irony is not lost on me that, though I’m no farmer, Vinh and I share a common concern for our children in the wake of a changing climate.

Admitting my mistake allowed me to hear Vinh’s dreams for his daughter. It cost me a bit of pride, but it meant that I left Vietnam with more bridges than walls between my host’s culture and my own.