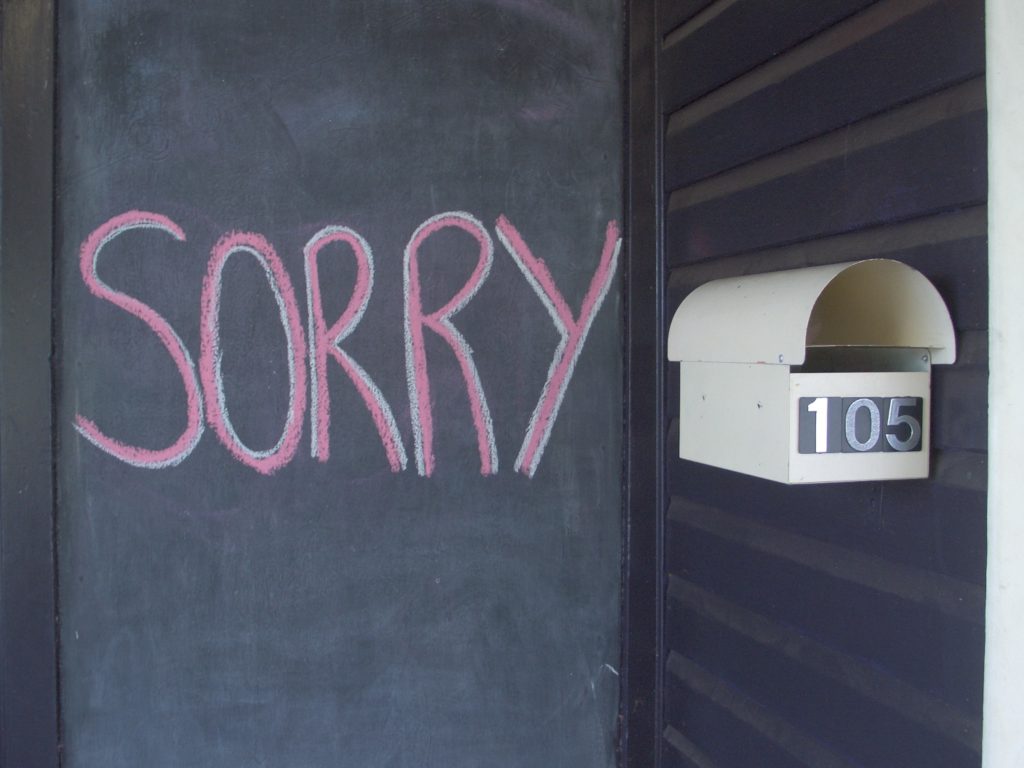 Not long ago, I planned a series of classes for my church. The team and I made a schedule, and we found the right teachers. My job was to get a curriculum and train the teachers to use it. With four weeks to go, I had plenty of time.

Three days before the classes started, I still hadn’t done it, and my teachers were not happy. I scrambled to send them the lesson plans and quickly trained them. They had to rush to prepare, struggling to get everything ready in time.

Then, I made it worse. I hoped that if I kept my head down, maybe they’d just forget about my mistake. Conversations got awkward, feelings were hurt, and we didn’t resolve the conflict. Instead of apologizing and moving on, I let my mistake damage relationships with people I cared about.

Everyone makes mistakes. We miss deadlines. We flake on friends. We forget birthdays. If you handle a mistake gracefully, you can heal emotional wounds before they fester.

When you realize that you’ve made a mistake, own up to it in person. Responsible people admit their faults and take ownership of their decisions. And the sooner you apologize, the better, so your small blunder doesn’t turn into a big problem.

Face-to-face conversation is always best. It’s natural to want to avoid confrontation, so it’s tempting to text someone a sad-face emoji, hoping that’s enough. Email doesn’t reflect your tone of voice, and a text can’t express the contrition in your eyes. Buy your friend a cup of coffee. Pop into your boss’ office for a few minutes. A good apology requires a human element you can’t achieve electronically.

Beware of the “non-apology” apology

Politicians and celebrities are experts at apologizing without admitting they did something wrong. They say, “I’m sorry if you were offended” or “Mistakes were made.” A non-apology apology leaves everyone feeling a little slimy. When you apologize, admit that you did something wrong and that you can learn and grow from it. The person you wronged will appreciate your honesty and integrity.

Avoid excuses. They shift the blame from you to the situation. Even if there are mitigating circumstances, you still made the mistake. Even worse, blaming the situation makes you look immature.

RELATED: 5 Ways to Say, ‘I’m Sorry,’ to Your S.O. That Are Better Than Flowers

About a month ago, I almost got hit by a car. The driver didn’t see me crossing the road. He immediately apologized. I told him it was no problem, but that didn’t seem like enough. He kept apologizing repeatedly. He didn’t stop until I said, “I forgive you.” I acknowledged the mistake, gave forgiveness, and we could both move on.

Something powerful happens when we ask for and receive forgiveness. For Christians, like me, forgiveness is one of the cornerstones of my faith. Forgiveness doesn’t gloss over the mistake. It openly acknowledges it, but also begins to repair the relationship. Even if you’re not religious, the words, “I forgive you” change something in ways that are hard to explain. It lifts a burden from our heart in ways not possible when you say, “It’s ok.”

An apology expresses remorse for past actions. Making amends rebuilds the relationship. Take stock of the damage you caused, and find a way to repair it. That’s easy if you damaged property. You can clean, fix, or replace items.

You have to be more creative when your mistake can’t be fixed. Small gestures can make a big difference. You could mail a personal apology on a card or a letter or buy a small gift. Take your friend out for something that you enjoy together or do a chore to make life easier.  The extra effort it takes shows your commitment to making amends. Sometimes, though, all you can do is talk about how you plan to keep your mistake from happening again. If the answer isn’t clear to you, simply ask, “How can I make this up to you?” Then, follow through, remembering to be patient. Rebuilding trust can take time.