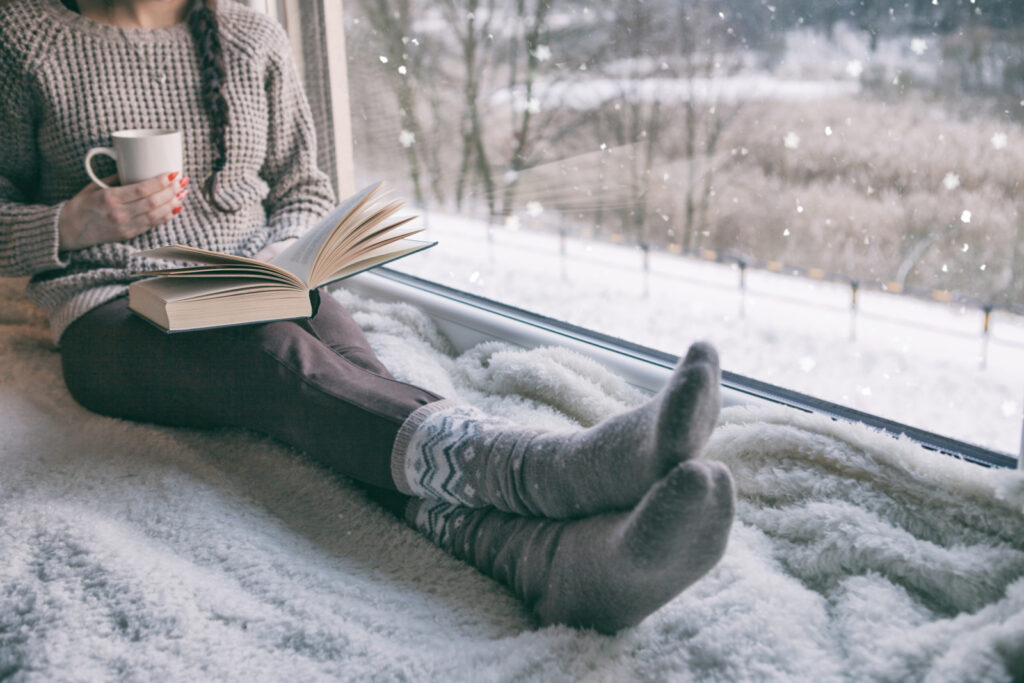 I’ll be the first to admit that winter is not my favorite season. It gets dark by 5 p.m. I have to put on multiple layers of clothing just to step outside. And, the world seems smaller and less inviting than during other seasons. (Not to mention having to play “puddle roulette” to figure out whether ice next to the sidewalk is solid or a freezing slushy mess in disguise.) But, despite my lack of enthusiasm for cold weather, each year I try to find ways to make winter not only bearable, but as enjoyable as possible.

If any of this sounds familiar to you, here’s what I like to do when the temperature drops:

As much fun as it can be to go to the movies when the weather is bad, I love to settle in and watch something at home. I sometimes do a quick search to see lists of the new releases that are coming soon on Netflix, Amazon Prime and Hulu. While I gravitate towards romantic comedies and mysteries, it can be fun to select something spontaneously.

On the occasions when I don’t have time to watch a full-length movie, I have been working my way through Jerry Seinfeld’s “Comedians in Cars Getting Coffee” on Netflix. The episodes are short and feature funny guests like Martin Short, Tina Fey and Jimmy Fallon. I’m also a big fan of Reese Witherspoon’s docu-series “Shine On,” in which she interviews celebrities like America Ferrara, Dolly Parton and P!nk about their career paths and how they have achieved some of their dreams.

Dive into a few good books

I try to make time to read for pleasure on a daily basis regardless of the season. But, if I have the choice between diving into a good book or braving a blizzard, I’m going to choose the book every time. Lately, I’ve been reading memoirs. Michelle Obama’s “Becoming,” Craig Ferguson’s “Riding the Elephant” and Ellie Kemper’s “My Squirrel Days” are all engaging reads. Sometimes, it is fun to let your thoughts wander through another time and place. When I’m in the mood for some historical fiction, I turn to Rhys Bowen’s Molly Murphy series about an Irish immigrant who moves to New York City that offers a fictional glimpse into life at the turn of the 20th Century. With nearly 20 books in the series, there are plenty to choose from.

Make your indoor space as cozy as you can

After I’ve been outside battling the elements, I savor returning indoors and curling up with a blanket in my most comfortable chair. Having a place to settle into and get warm is soothing and rejuvenating, especially because I’m one of many people who have a health condition negatively impacted by the cold. After getting Lyme disease several years ago, I have been more affected by temperature extremes. So, ensuring that my home is a sanctuary from the harsh elements has become even more important. I keep the room at a temperature I’m comfortable in, turn on a lamp that casts a warm glow to keep away the outside dreariness, and if I am in the mood, have a hot cup of tea.

Plan activities to look forward to

While some people are afflicted with a diagnosable condition called Seasonal Affective Disorder, it is not uncommon even for those who don’t have it to feel less motivated  as they are during other times of the year.

Having plans on the horizon, even if they aren’t imminent, always keeps my spirits up. Sometimes, the anticipation of something fun gives me added energy. Whether it is getting together with family or friends, seeing a movie or play, catching a concert, or wandering around an art gallery or museum, I enjoy having things on my “look forward to” list — even if I don’t know exactly when I’ll get to do them. I’m especially excited to check out the newly renovated Museum of Modern Art in NYC and to catch up with my best friend who I haven’t seen in a few months.

There have been times when I have decided to go for a walk with my camera to capture the beauty of winter scenery. On one bright, sunny (but freezing!) morning, I noticed how perfectly the sunlight illuminated the snow-covered branches of a fir tree. It captured the beauty of nature with such simplicity and elegance. I took a few photos and had my favorite made into Christmas cards to send the next year. These spur-of-the-moment occasions have offered a great antidote to the sense of “cabin fever” that can set in when cooped up inside for too long.

Despite the fact that winter has never been my favorite season, I still try to savor this time of year because it reminds me that life is continually changing and no year is exactly the same. Whether I am ringing in the start of a new year or launching my annual countdown to spring sometime during the mid-February doldrums, I am reminded that whether the days feel like they pass quickly or slowly, they are still alive with new possibilities. I can’t wait to discover them.