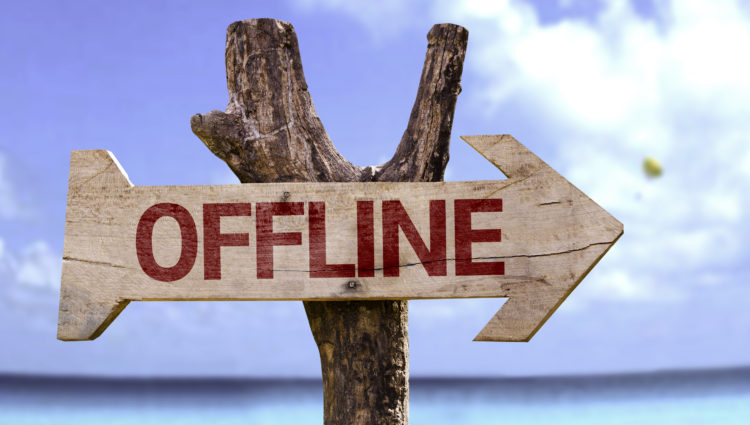 I was waist-deep in a Facebook stalk session, casually observing my longtime ex-boyfriend’s new girlfriend’s life events, when the pit in my stomach asked: “Why?”

There are so many things one can do in a day, why am I choosing to spend time comparing myself to my ex’s new girlfriend?

But that’s just it. It didn’t feel like a conscious choice; it just, sort of, happened.

I realized that many of my Facebook behaviors were unconscious. And while perusing the profile of my ex’s new girlfriend was a habitual predicament I’d become familiar with, there were more, arguably even less reasonable predicaments too.

Like, am I really looking at an acquaintance’s roommate’s new baby announcement and allowing my own baby-less womb to feel inadequate? Yes, yes I am. And it feels awful.

RELATED: How a Self-Care Routine Changed My Life

So, in a fit of self-preservation, I decided to disconnect from my online world and reacquaint myself with my real life B.S.M. (Before Social Media). The initial plan was to deactivate my two active channels — Instagram and Facebook — for one month. And while it was a little tough to see Instagram go, Facebook was my channel of choice, so I knew that would be the biggest struggle.

As it turns out, my one-month social hiatus brought me so many unexpected benefits that I changed the plan from one month to a full year in an effort to maximize those benefits. This is what I learned.

I learned to be more comfortable with stillness

At first, I felt naked and anxious without my Facebook fix. Embarrassingly so. It was disturbing how often I reached for my feed anytime there was a lull—standing on line, watching television, lounging in a waiting room, etc. I realized that my long-standing relationship with social media became a near total inability to be idle.

Over time, I grew more comfortable with stillness. In fact, I invited it. I realized that substituting the moments normally spent digesting my 900 closest friends’ life events with moments of stillness, was immensely therapeutic.

It gave my brain more space to process discomfort and let it go, rather than push it down with distraction where it ultimately burrows into anxiety. And with that letting go, I started to experience what it meant to be truly present and to pay closer attention to the world around me. I noticed things that never would’ve caught me eye had my nose been buried in my phone–my dog sighing in a sunbeam, the citrus smell of my morning tea, the way the wind feels on my face when I’m walking down the street–this is the kind of precious stuff life is made of and I’d been missing it all this time.

I compared myself to others so much less

Most people on social media are presenting the highlight reels of their lives rather than the real deal. So what we see are folks who always seem super happy doing super awesome things, all the time.

In small doses, this is great, especially when it comes to people we love. But if we spend day after day looking at these seemingly perfect lives, it’s really tough not to eventually look at our own lives through an unfair lens and start to feel inadequate by comparison.

RELATED: Dreading your Self Evaluation? How to Prep for Success

What I realized when I took myself out of this equation was just how unnecessary (and unhealthy) it all was. With each passing day, I began to focus less on the lives of others and more on the highlights of my own.

I reconnected with friends

The most ironic part of my social media hiatus is that I ended up cultivating better, more quality connections with friends. Because I couldn’t look at my feed to find out how everyone was doing, I actually had to reach out to people and, y’know, talk to them.

And while not having access to the feeds of more distant friends meant I lost sight of what was going on in their lives, I had more energy, mentally and emotionally, to dedicate to the relationships that are most important to me.

Without so much screen time, my brain needed to find other ways to occupy itself. As a result, I grew more curious and creative.

I began looking for more books, hobbies, and crafts to fill the hours that would normally be spent digging into the digital lives of acquaintances.

Now I’m an avid candle-maker, sewer, drawer, and soap-carver, which are all things that give me an unparalleled sense of satisfaction. And they never would’ve come to be if I hadn’t allowed myself time to be bored.

These days, I’m back on social media, but it has a much better, smaller role in my life, reserved mostly for work events.

My yearlong hiatus reconditioned me to look for connection in the real world, so it just isn’t as compelling as it used to be. I don’t have to check my feed to see how my friends are doing because I call them instead; I now relish idle time rather than avoid it with mindless distraction; and I focus on my own little world instead of those of my Facebook friends. But if I ever start to go down that rabbit hole again, I know that all I need to do is close my laptop and step outside.