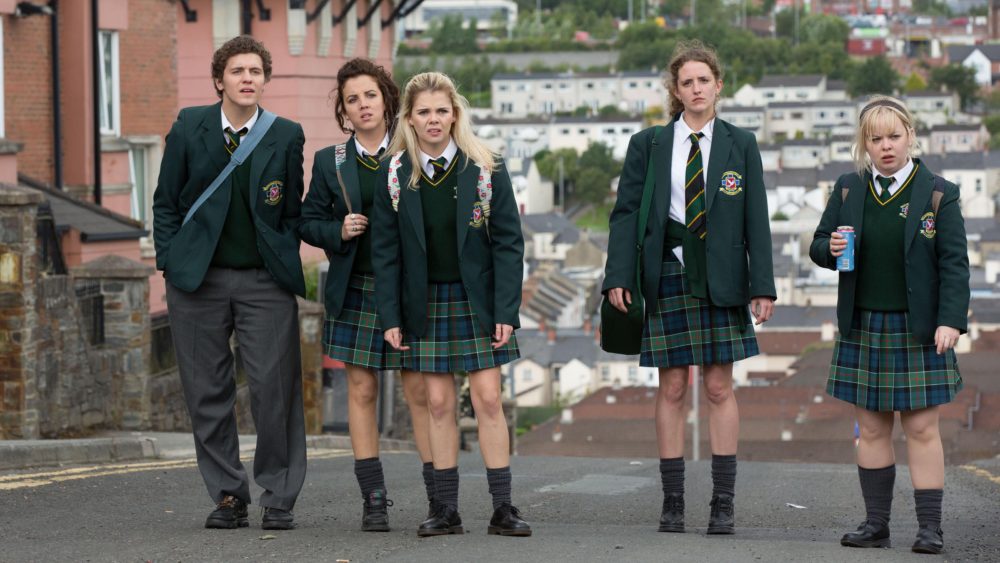 During the winter months, we naturally start to slow down and spend more time indoors. With colder temps and snow storms, I find there’s no better place to be than cozied up on your couch for an afternoon binge-watching session. When it’s too cold to go outside, it’s the perfect opportunity to catch up on all the shows everyone’s been talking about.

But nowadays, there are so many shows to stream—and it can be hard to find something you truly enjoy to invest a few hours, or your entire Saturday into. As a seasoned TV-binger, I’ve created this roundup of new-to-me shows to watch during the coming months—all with some type of value. Some educate, some inspire, and others might simply lighten your mood, but all of these options will give you something more than just entertainment, so you don’t feel like a total couch potato. A binge with a bonus lesson is always a plus!

Here are the best shows to indulge in this winter:

Omg—this is one I instantly fell in love with because of the Irish humor! Written by Lisa McGee, “Derry Girls” follows four teenage girls living in Northern Ireland during the ‘90s. Somehow, even amidst the time known as The Troubles, these four characters lead relatively normal, but hilarious lives—and find themselves in all sorts of trouble too. If you want a good laugh and enjoy witty writing, “Derry Girls” is the perfect escape. Tip: Turn on the subtitles if you have a hard time understanding accents! Watch here on Netflix.

By far, comedian Daniel Sloss’ two Netflix comedy specials are my favorite. The funnyman from Scotland covers taboo topics with wisdom and honesty that’s truly admirable. And he’s just hilarious. The first, “Dark,” touches on everything from disability to death—and the second, “Jigsaw,” is all about relationships (and has notoriously broken up thousands of couples because of the comedian’s ability to shine light on the true reasoning behind lifelong partnership). His viewpoints on love and life are refreshing and authentic—and hopefully you’ll be a huge fan like I am after watching his specials. Watch here on Netflix.

I’m not usually into anything to do with murder—but “Killing Eve” had me hooked from the first episode. Written by Phoebe Waller-Bridge, it’s about the relationship between a serial killer (Jodie Comer) and the cop who is pursuing her (Sandra Oh—who won a Golden Globe for her performance!) It’s gotten rave reviews from critics. I watched this show because I love the writer’s other work (“Fleabag”) and the way she portrays women in such a truthful, non-polished way. If you want to watch a show with two strong female leads, then this is an excellent choice! Watch here on iTunes.

Jack Whitehall’s “Travels with my Father”

If you’re looking for a hilarious way to learn about new cultures, then Jack Whitehall’s “Travels With My Father” is for you. Jack, a well-known British comedian,— takes his rather posh father with him on a “backpacking” adventure to places like Vietnam, Thailand, and Cambodia. They participate in different activities in each country, from an ancestral burning ceremony to exploring Chernobyl. You will LOL and get to see the world. Watch here on Netflix.

This show is newer to Netflix in America, but a classic to Australian audiences. If you love “Parenthood” and “This Is Us”, then you’ll love “Offspring.” It’s about a large family and the funny antics and heartbreak that happens in their relationships with each other. With the tv-ready family dynamic of divorced parents, one responsible sister, one wild sister, and one crazy brother, “Offspring” is a feel-good escape, with mostly comedy and a bit of drama. I loved the characters and watching their lives unfold (and unravel) left me feeling like I was a part of the Proudman family. Watch on Netflix.

If you’re a fan of “The Office,” then you’ll love this mockumentary comedy series about a team of inept border agents who work at an airport in the UK. It tackles everything from immigration issues to racial profiling—but somehow in the same fun, lighthearted tone of other sitcoms. I stumbled across this while looking for something funny to watch and gave it a try because I love British humor. I’m so happy I did!  Watch on Netflix.