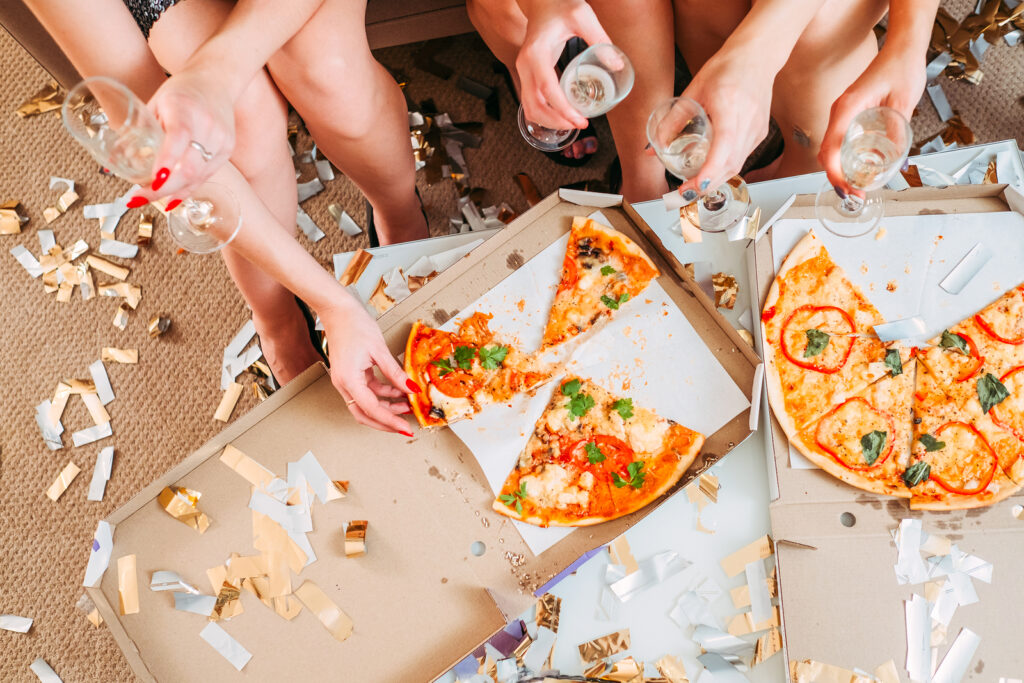 I’ve never seen the appeal in wandering around on one of the coldest nights of the year in a glittery (and much too thin) dress with treacherously high heels. Instead of heading out to watch the ball drop in a crowded, loud room (or worse, outside shivering in the shivering cold), I’d rather snooze on the couch in my pajamas with friends. In that vein, here’s my countdown of what makes for the perfect New Year’s Eve in:

I always ask my friends to bring pajamas — the more ridiculous, the better. My family has a tradition of gifting brand new pajamas every year under the tree, so I can debut a new “look” each NYE. With everyone snug in their favorite comfy clothes of choice, the mood is lighter and there’s no need to worry about transitioning from party to sleep. It can happen anytime!

Candles are one of the foundations of hygge, which is a mood I aspire to year-round. Any good night in, but especially a festive one, should have a variety of candles at different heights and places around the house. This is especially important if there’s no roaring fire to gather ‘round.

Now that I’m an adult, instead of drinking “jungle juice” from “a trash can,” I can create over-the-top cocktails in actual glasses. After all, New Year’s Eve calls for something swanky like a champagne bar. An easy way to do this is to grab some lemon twists, pomegranate seeds, cherries, grapefruit juice, and various sparkling wines to create your own bubbly corner.

My friends and I are obsessed with classic slumber-party board games like Clue and Sorry!. We really get into the competitive spirit of the game, often playing multiple rounds tournament style. If you’d rather just laugh, Cards Against Humanity won’t steer you wrong. (…Or will it?)

I’m the type of person that gets hangry if I don’t eat every few hours, so I like to keep some festive appetizers circling around the room. You can’t go wrong with classics like pigs in a blanket or anything with puff pastry, especially because the most complex preparation step is reading the directions on the box.

As the night stretches on, I love to curl up in my cozy pajamas (see #10) and watch oldie but goodie ‘90s romantic comedies like “Notting Hill, ” “Clueless,” or “When Harry Met Sally.” This year, though, we’ll probably take a spin through something new, like the delightfully campy “Falling Inn Love” from Netflix.

Appetizers only go so far. At some point while watching rom-com #2 I hope to be eating something fried or noodle-y out of a steaming plastic bowl. I always order from the local mom-and-pop Chinese place down the street since no matter how long we argue over what to order, it still shows up 10 minutes later — and it tastes so good!

A sleepover staple in my life for as long as I can remember, I make sure to put on a face mask at some point in the night — especially since I won’t be getting my beauty rest!

If there’s one thing more important than hating a holiday, it’s making sure everyone else knows you hate it, too. Footie pajamas and all, a group Insta is a must. A low-cost option is to get golden numbered balloons to spell out the upcoming year.

Actually…New Year’s Eve isn’t all that bad, especially when you do the things you love the most and don’t feel pressured to do otherwise. Last year, as my friends and I slowly drifted off to sleep while watching Taylor Swift’s concert special, I realized that just because I don’t want to leave my house doesn’t mean I can’t have fun. Now you can too!