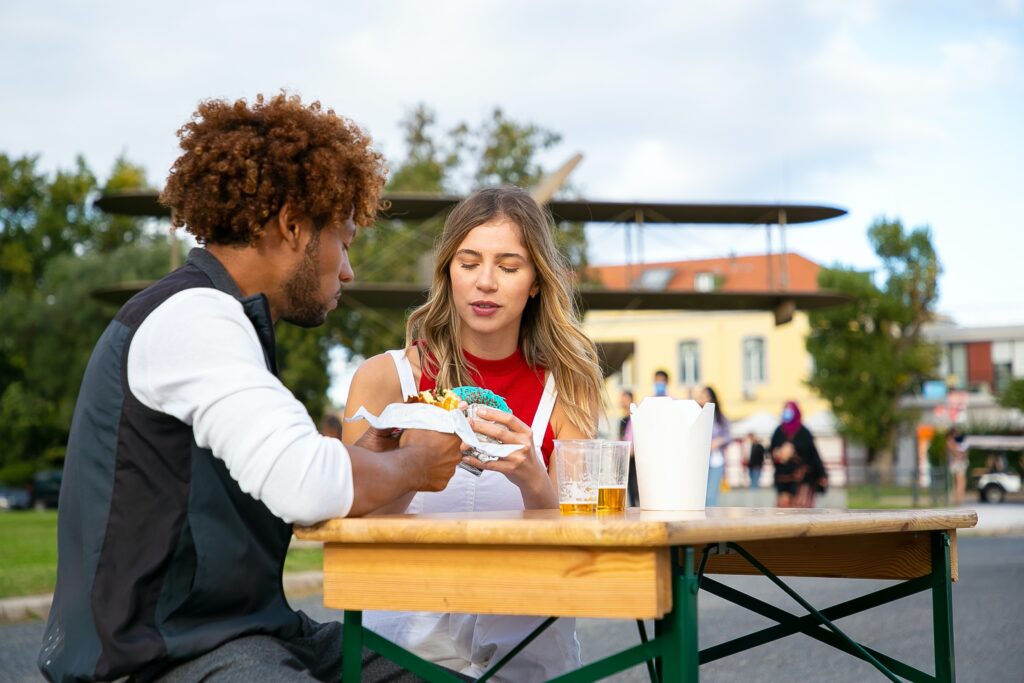 “On what date do you tell someone you go to church?”

That, verbatim, is what I typed into Google while walking to meet my date for a late brunch. It was an unusually brisk day for the beginning of March, and we had plans to sit in the park after eating.

Expecting to find my answer from some millennial website, I was instead greeted by a slew of Quora threads debating the best way to invite someone to church. Frustrated, I shoved my phone back into my pocket and kept walking, deciding that I had to tell him. After all, it was Sunday, and I had just come from church.

RELATED: How to be Authentic in Your Online Dating Profile

Don’t squander this, I told myself. Over the course of the 10 or so dates, both of us had made offhand comments alluding to religion — me giving up social media for Lent, him getting such-and-such a book for Christmas — but we always managed to gracefully dance around it, as one does in the tenuous world of early dating.

In my mind, there was always a clear line of demarcation between the area of my life where I am ostensibly “religious” in the sense that I have a religion, and the area where I describe myself as capital-R Religious. And, if I crossed that line by telling someone that I was Catholic, I would be willingly subjecting myself to the arduous task of trying to explain that just because I’m religious doesn’t mean I ascribe to everything the institution espouses. That my church is actually filled with progressive, thoughtful, and incredibly well-educated young people. I never had the energy for that many prefaces and caveats.

Plus, for the amount of time I spent thinking about how to say it, I could never quite come up with a way to simultaneously play it up and play it down. To let him know that this was an actively important part of my life, but not overwhelmingly so. I was aware, of course, that how he received it — whether he indifferently lumped “goes to church” with other identifying attributes like “takes French classes” and “likes to read books” — was entirely beyond my control, but the delivery was, and I wanted to nail it.

I arrived at the restaurant, and about 15 minutes after we were seated, the question came. “So how was your morning?” he asked me.

I took a sip of water, smiled, and waited for what probably was a beat too long.

“My morning was nice! Went to a barre class, then swung by Rizzoli’s to pick up a book…and then I actually went to church.”

As soon as it landed, I regretted my decision to toss in “actually,” as if I was revealing something unexpected that I don’t usually do.

“I go to church fairly frequently. A Jesuit church, actually” — Ah! There it was again — “called Xavier. In Chelsea. I volunteer through the parish every so often, which is what I really like about the Jesuits. It has a strong community.”

Deciding that this was an optimal moment to pause, I took yet another sip of water, letting the words sink in and bracing myself for a response.

“That sounds cool!” he said.

RELATED: How the Pandemic Changed My Dating Perspective

Whether or not he had plans to elaborate from there, I will never know, because it was at that moment when the server arrived with our drinks. An abrupt end to an otherwise brief exchange. A blip, really. I don’t know what I expected from a “reveal” that was far more dramatic in my mind than it was out loud, but “cool” as the prevailing adjective wasn’t it.

A perfectly nice meal and pleasant afternoon followed, and it was only as I was walking home did I let the moment sink in — and along with it the sting of disappointment at how underwhelming it all felt.

But at least it happened. At least the words, which had been there all the while in my head, were formulated into sentences and articulated out loud. I realized that my reluctance to share this part of myself in a meaningful way was only feeding into the assumption that my faith was something that had to be justified. That nobody would understand. That I would be misunderstood.

Soon after that date, COVID hit, I fled the frenzy of Manhattan for my childhood home, and our relationship fizzled. Whether it would have survived in a non-pandemic world, I will never know. But if there’s one thing I am certain of, it’s this: What I say about my faith isn’t nearly as important as how I live it.

So when it’s safe to start dating in real life again, I’d like to believe I’ll remember this experience. I’ll remember that, more often than not, any doubts are inside my head, and I’ll muster up the confidence to bring up religion earlier on — knowing full well that how I spend my time, what I read, the way I treat people I know and people I don’t, well, that speaks far louder than anything I could say.