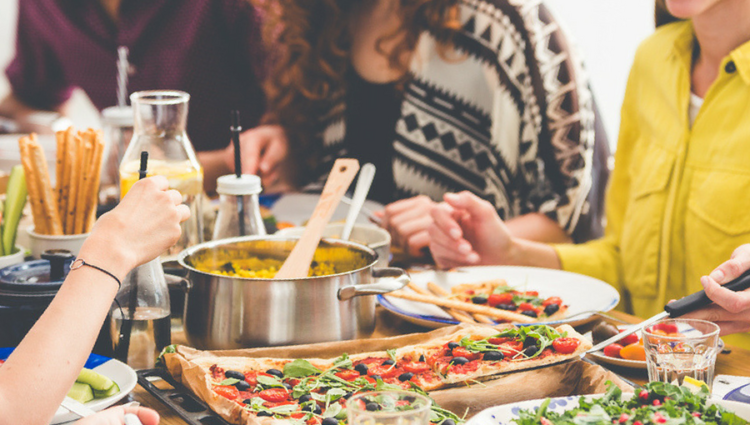 “Why did you decide to go vegan?”

I’ve been answering this question for about a year, ever since I made this huge lifestyle change. People react to my decision in a variety of ways, but some of my favorite responses are “How do you get protein?” and “Don’t you miss bacon and pizza?” To be fair, before I went vegan, I was asking other vegans these same questions.

Veganism primarily involves cutting all animal products from your diet, but can also include avoiding clothing or homegoods that use fur or leather, as well as boycotting products that test on animals.

About a year ago, after lots of research and conversations with friends who were vegan, I tentatively made the change from my year-long vegetarian diet to a vegan diet. I initially became vegan primarily for the health benefits, specifically in the hopes that a plant-based diet would help regulate my weight and end my long battle with poor skin. While I was aware of the other central beliefs of veganism, they were not very important to me. However, I now fully embrace all three tenets of veganism and strive to carry them out in my day-to-day life. Here’s what I’ve learned from the transition:

One of the main lessons veganism has taught me is that every individual has the ability to reduce environmental harm with their food choices. Long before becoming vegan, I watched a documentary called “Cowspiracy,” which describes the primary ways cattle farming and the production of beef harm the environment. I was shocked to find out just how destructive the beef industry can be; up to 2,500 gallons of water are needed to produce one pound of meat. In the past, I had always been told to “take short showers” or “turn the faucet off while brushing your teeth” to conserve water, but certainly never to stop eating hamburgers. After doing some research, I learned that a plant-based, vegan diet uses considerably less water than a meat-based diet. By becoming vegan, I felt like I was starting to do my part.

As someone who never thought I could give up pizza or ice cream, I fully believe this lifestyle has enabled me to become more open-minded when it comes to my diet. While there are certainly vegan substitutes for just about any food out there, they are often expensive and highly processed. Since I’ve spent most of my life eating meat, eggs, and dairy, going vegan has challenged me to re-imagine my meals and focus on adding more fruits, vegetables, beans, and complex carbs to my diet. In my experience, veganism has drastically changed my taste and improved my willingness to try new dishes. Some of my favorite go-to foods are avocado toast, sweet potatoes, veggie stir fries, and pitaya bowls.

Veganism has also helped me form some wonderful friendships and join communities that promote healthy and sustainable lifestyles. Social media, particularly Instagram, has allowed me to talk to other vegans and find recipes, tips, and info about a vegan diet. Since becoming a vegan, I’ve also learned more about sustainable food production and now strive to patronize local farms, communities, and businesses, which come with their own circle of like-minded people. As a consumer, I can use my purchasing power to support food companies that utilize sustainable production methods or vegan restaurants that use local produce.

Not only have I tried so many new foods since going vegan, I’ve also become a more conscious consumer and global citizen. I now prioritize cutting down on waste, recycling, and reducing consumption of unnecessary goods whenever possible. As someone who went vegan primarily for the health benefits, I now realize that a vegan diet and a sustainable lifestyle go hand-in-hand. While I’m a huge advocate of a vegan lifestyle, I believe it’s up to each individual to find what works for them and what excites them about living sustainably.

Before going vegan, I was someone who claimed I cared about the environment but didn’t do much to actually care for it. I certainly still have a ways to go, but now I am working every day to live a more sustainable lifestyle. Veganism has ultimately allowed me to feel healthier and happier while educating myself on the causes behind environmental problems and the ways in which we can work toward a sustainable future — one meal at a time.