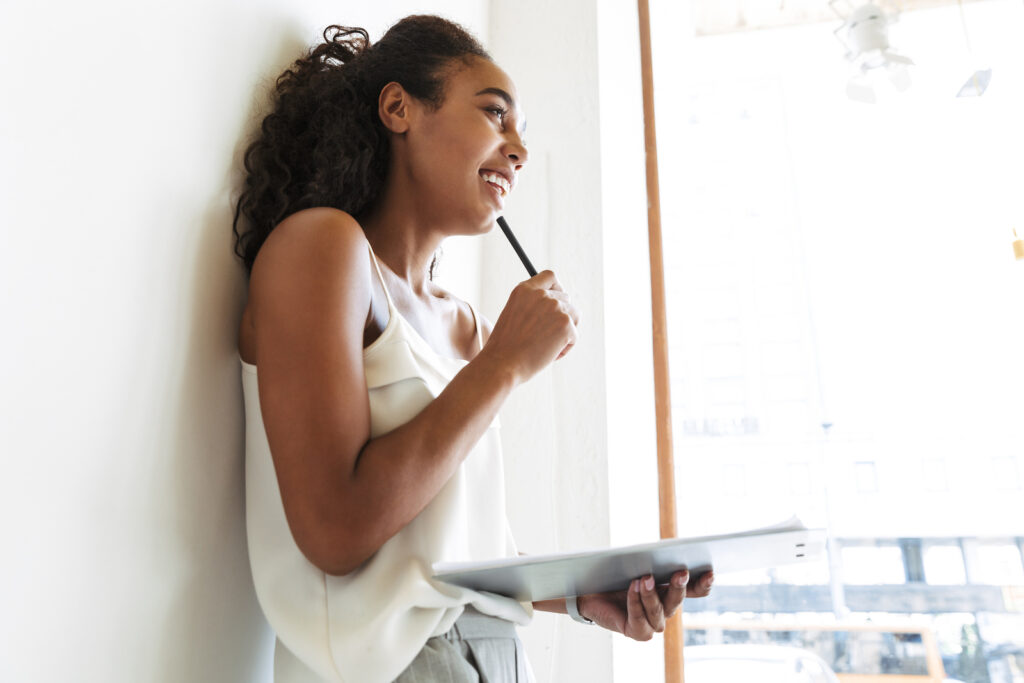 “Wow, I hope this isn’t really how people see me,” I thought at a recent training at work. We were watching a video that reviewed people’s behavioral and personality differences and while the actors were clearly exaggerating to make a point, I still felt myself shrink a bit in my seat when the clip on my profile was played. The actor portrayed someone reliable, but hesitant to commit –- persistently asking for more information and having to be prodded along by coworkers to commit to completing a project by a certain date. Yikes.

The video clip struck a chord with me because I’m self-aware enough to know that quick decision making isn’t a natural strength of mine. Because of that, I’m sensitive about how my decision-making skills are perceived by others, and have spent years working to build them up.

Through lots of research and practice, I’ve identified two methods that help me identify why I’m struggling with a decision and allow me to move forward when I’m feeling stuck.

About a year ago, I signed up for Shine, a self-care program that sends free daily motivational texts. These texts aim to reduce stress and anxiety and help you feel in control of your life. One that has always stuck out to me was an article about the OHIO method. The focus of the OHIO method is that, when you have a task, you Only Handle It Once.

While OHIO is ultimately about productivity, I’ve used it as a tool for pushing myself to make decisions, and it’s helped me identify some of the reasons I’ve avoided committing in the past.

For example, I recently received an invitation to a baby shower I can’t attend. I knew as soon as I opened the invitation that I had a conflict, but I found myself tempted to leave the RSVP for later. I’d have to decide later whether I could make the timing work, I thought, as I tossed the invitation back on the counter.

But then, I stopped. Why was I putting this off? It was because I felt…guilt. I wanted to be there for my friend, but I knew I couldn’t change the conflict. Whether it was today, tomorrow, or next week, I had to make and share the decision to not attend. So, instead of drawing out my guilt for days as the invitation stared me down from the counter, I decided to OHIO it. I texted my regrets, pulled the registry up on my phone, and chose a gift to send in my absence. It was all handled in less than 10 minutes.

Making and communicating this decision quickly didn’t take away my disappointment at missing the event, but it did provide mental relief. I wouldn’t stare at the invitation on the counter each day, knowing I needed to deal with the RSVP or have a nagging reminder to send a gift for the weeks leading up to the event.

In addition to disappointment or guilt, I’ve identified that a fear of failure can also drive my hesitance to make a quick decision. As a perfectionist, I want to make the right decision all the time. To do this, I want to have all the information about the decision I need to make and the possible outcomes.

However, trying to anticipate everything that might happen before deciding is unrealistic (and unproductive). To move past this, I’ve embraced a concept that a coworker introduced me to – failing fast.

While there are mixed feelings on, or interpretations of, failing fast, my takeaway is that if you’re stuck on a small detail or something without grave consequences, you need to stop worrying about failure and switch your mindset to one of learning and growth. You make a decision, accept feedback, and adjust as necessary to be successful in the long run.

So, at work, if I find myself stuck on something simple, like how to format a chart, I take a deep breath and remind myself of failing fast. I submit it the best way I know how and accept that I may have to ask for feedback and adjust.

At home, I use the spirit of failing fast to make decisions, too, especially when I can feel myself getting caught in the weeds. For instance, when we were debating which shade of blue to paint our family room, I had to just accept that the worst-case scenario was that we would have to paint it twice. While, unfortunately, this is exactly what happened, we still got the work done quicker than if I had allowed myself to continue wasting time staring at countless paint chips taped to the wall.

By using methods like OHIO and failing fast, I’ve shifted to a mindset that removes fear of failure or guilt and focuses on getting decisions made and tasks done. This has helped me not only free up space on my to-do list, but also relieve mental anxiety and stress. And while I still have work to do, I’m driven to continuously improve so that energy can be dedicated to people or activities I enjoy, instead.