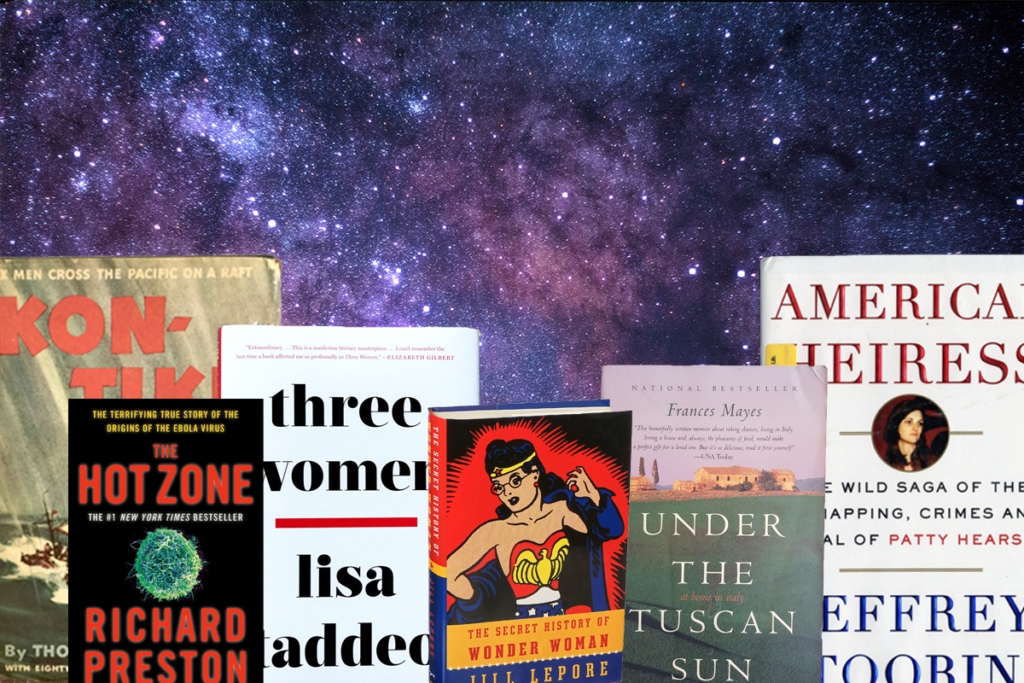 I love to escape into books — and for that reason, I mainly gravitate toward fiction, especially tales of adventure or fantasy. But there’s plenty of fantastical adventures to be found in the real world, thanks to creative nonfiction, a genre I didn’t know existed until a few years ago. If you’re unfamiliar with it like I was, creative nonfiction applies the storytelling techniques you know and love from fiction to recounting real people’s lives. Here are a few of my favorite reads you won’t believe are actually nonfiction.

RELATED: 6 Novels to Make You Think Deeply About Faith

For the science lover

Some of the strangest nonfiction books I’ve read have come from fascinating scientific discoveries. I couldn’t sleep for a week the summer before my sophomore year of high school after reading “The Hot Zone: The Terrifying True Story of the Origins of the Ebola Virus” by Richard Preston. Our biology teacher assigned it as summer reading to learn how deadly viruses like Ebola mutate — and he may as well have assigned science fiction writer Michael Crichton’s “Andromeda Strain.”

But scientific nonfiction doesn’t have to be spine-tingling. I laughed out loud at “Disappearing Spoon: And Other True Tales of Madness, Love, and the History of the World from the Periodic Table of the Elements” by Sam Kean, which walks through wacky stories of discovery, rivalry, and scientific achievement for each element on the periodic table.

For the secret superhero

I adore Gal Gadot’s version of Wonder Woman, so when I learned about “The Secret History of Wonder Woman” I knew I had to read it. Jill Lepore spins an incredible narrative of William Moulton Marston, Wonder Woman’s creator, and the astonishing women who inspired the iconic character in the early 1900s. It’s a great read before the sequel comes out in June.

“Three Women” by Lisa Taddeo is the type of book handed off by your friend, who got it from her friend. It follows the romantic lives of three real women — Nina, in a loveless marriage; Maggie, a student who falls in love with her teacher; and Sloane, in an open relationship. I got it from my friend, naturally, and while the power dynamics and personalities of the women have made this a divisive read among our group, there’s no denying Taddeo’s reporting makes you feel like you’re speed-reading through a novel — except it’s all real.

For the fearless explorer

Imagine deciding one day to build your very own wooden raft and test it by crossing the Pacific Ocean — that’s exactly what Thor Heyerdahl does in “Kon-Tiki: Across the Pacific by Raft,” to test out his theory of human migration. Encountering storms, sharks, and more, I was continually astonished by the whole premise of the 4,300-mile expedition. Is there anything Heyerdahl can’t do?

For the celebrity gossip

Growing up, my guiltiest pleasure was coming home after school and watching reality shows like “Newlyweds with Nick and Jessica” and “The Simple Life.” While I no longer obsess over the tabloids, I recently picked up Jeffrey Toobin’s “American Heiress: The Wild Saga of Kidnapping, Crimes, and Trial of Patty Hearst.” This true story of Patty Hearst’s kidnapping — and subsequent radicalization — contains plenty of twists and turns to keep you on the edge of your seat.

For the world traveler

I’m constantly planning my next trip. And while romantic fantasies of buying a house in a small Tuscan or Provencal village (ahem, “Under the Tuscan Sun” and “A Year in Provence”) are fun to read, they’re not strange. Enter instead into the wild world of Travis Elborough’s “Atlas of Improbable Places: A Journey to the World’s Most Improbable Corners.” Abandoned bunkers, bizarre tourist traps, and underground labyrinths are just some of the places you’ll explore.