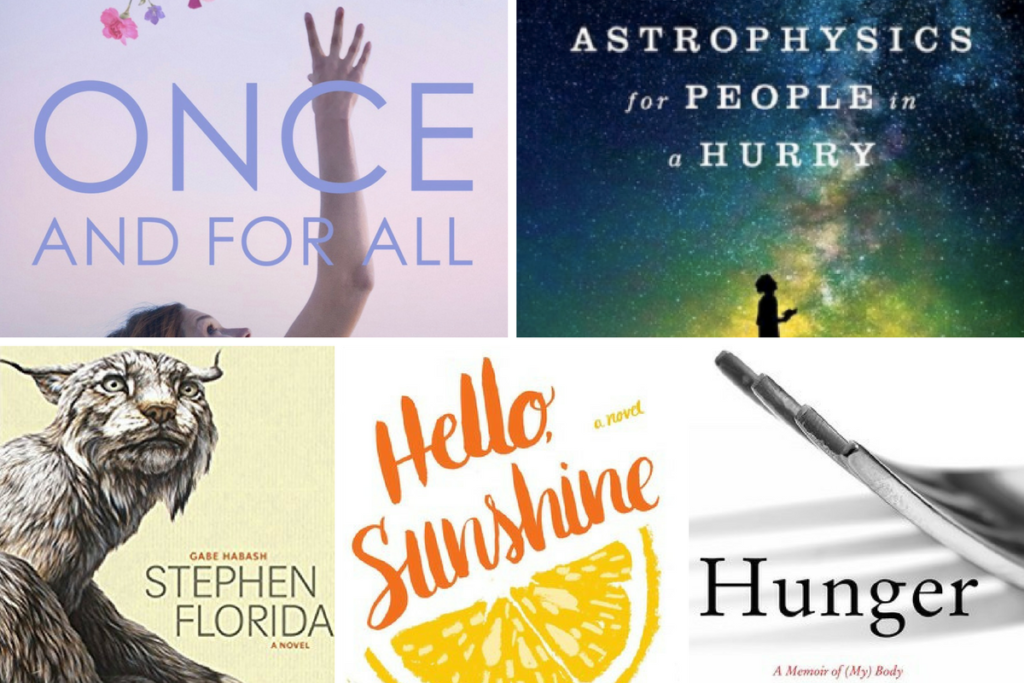 I’ve been known to always be carrying a book—or two, if I don’t know if I’ll be in the mood for an unputdownable thriller or historical fiction when the subway is delayed or I’m lounging in the park. This summer brings a variety of new releases to suit the mood of wherever your summer plans may take you. Here are just a few:

In the world of Instagram, YouTube, and reality TV celebrities, we have easy access to a star’s fall from grace. And that’s exactly what happens to Sunshine Mackenzie, a rising culinary YouTube star who is disgraced when she gets hacked and the secrets of her success are revealed to the world. In what promises to be a twisty page-turner, come along for the ride as she must deal with her PR nightmare and work to rebuild all she’s lost.

Perfect for: a long flight, car ride, or commute

“Astrophysics for People in a Hurry” by Neil deGrasse Tyson

In his signature approachable and (ahem) down-to-earth style, famed astrophysicist Neil deGrasse Tyson delves into everything from quarks to dark matter. While I never thought “accessible” could be used in the same sentence as “astrophysics,” this digestible read promises to be a great refresher or intro to the field. Get ready for both your mind and sense of wonder to expand.

Perfect for: the park, backyard, or anywhere with an open sky

“What We Lose” by Zinzi Clemmons

The daughter of mixed-race parents and with ties to two different continents, Thandi doesn’t fit into a box with a clear-cut identity. After her mother’s death, Thandi feels even more untethered, and she searches for ways to deal with her grief. Strong, heartfelt writing and powerful vignettes will craft this emotional reflection on loss and identity.

Perfect for: curling up on rainy days

“Hunger: A Memoir of (My) Body” by Roxane Gay

Summer is the season of fun, sun, and … all of the anxieties and vulnerability that come with showing some skin. Gay’s honest, sharp, and powerful memoir explores how her childhood traumas, societal pressures, and struggles with body image have shaped her. She tackles her painful experiences and ongoing struggles head-on with admirable intimacy and courage, and I think readers will feel all the more moved for it.

Perfect for: a book club or sharing with your friends

“Once and for All” by Sarah Dessen

Weddings are a blast when you’re not the one planning! One of my favorite young adult voices from when I myself was a teenager, Sarah Dessen still delivers characters that are fresh, realistic, and relatable. If you’re a sucker for teen romances or enjoy nostalgia for first loves, check this out. The story follows Louna, a teen girl who has grown cynical about romance despite being entrenched in the world of wedding planning. Watch what happens when her path intersects with the charming Ambrose, a total flirt hired to work alongside Louna for the summer.

Perfect for: lounging on the beach

Stephen Florida is intent on finally claiming the wrestling championship during his senior year at a North Dakota college. While he’s ruthlessly pursuing his goal, his clashes with his friends, teammates, and coach reveal an emotionally resonant loneliness and vulnerability bred in part by his obsessiveness and laser-focus. His overconfident, gripping, and dryly funny voice will draw you in and make you feel like you’ve stepped right into his mind.

Perfect for: reading poolside (before swimming some laps)

As a kid, I could read for hours on end and still get annoyed when my mom interrupted me saying it was time for dinner.…

I miss Robin Williams to this day. When I pursued a degree in education at the University of the Philippines, “Dead Poets Society” was required…