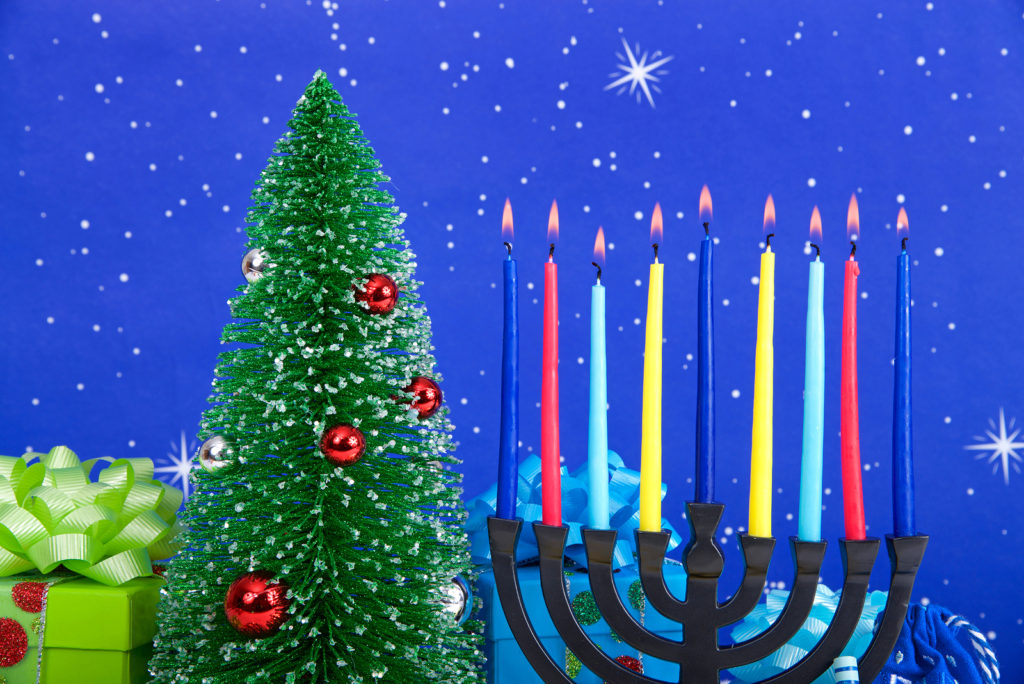 If someone were to tell my 15-year-old devout Catholic self that I would one day marry a Jewish guy, I would have balked. But, here I am, 30 years old and spinning the dreidel at my in-law’s house after Hanukkah dinner.

I was born and raised Catholic and, unlike all of my siblings, I continued to practice throughout my adolescence. I was the only one in my family to go to Catholic high school, and that was by choice. I went off to college at Penn State University, where, probably unlike most college students, I spent my Sunday evenings attending Mass with my friends.

But because my faith has always been very personal to me, it never came up in casual conversation. So when I met a boy on campus, neither of us had any idea what religion the other practiced; we only knew it felt right to start dating. I don’t remember exactly when it was we realized we had different faiths, but I do remember this: We were too far into this relationship to simply walk away. After college, our relationship turned serious, and that’s when it really hit me: I was in love with someone who wasn’t Catholic.

RELATED: Revealing Your Faith in a Relationship

To be completely honest, for the first few years of our relationship I skirted around the issue. I put it in the back of my mind, simply because it was too difficult to talk about. I was too busy, selfishly, enjoying the fact that I would get to see MY family each and every Christmas!

As our relationship progressed, we began talking about a future together. All my life I envisioned myself walking down the aisle of a beautiful church and marrying the Catholic man of my dreams. Little did I know that God had other plans for me. The church would be a beach, and the man would be Jewish. But more important than his religion was the fact that he was everything I could ever want in a husband, and I was head over heels in love with him.

My husband and I have put in the work to ensure a healthy interfaith marriage. Rather than take the easy way out and avoid the topic, we sat down a number of times to discuss the obstacles we knew we’d face as people from different faith traditions, the priorities in our lives, and the sacrifices we promised to make for one another. We’ve learned firsthand that differences aren’t something to run from, and by accommodating them, we’ve grown stronger as partners.

All couples do have their issues, whether it’s money, communication, or in our case, religion, but I wasn’t willing to throw away the perfect relationship because of his religious beliefs. My faith will always be at the top of my priority list, and I’m lucky to have a husband who supports this in every way possible. And correspondingly, he knows I’ll always be on his side no matter what his passions and beliefs are. With true love comes compromise, and I am so grateful for making the decision that I did.