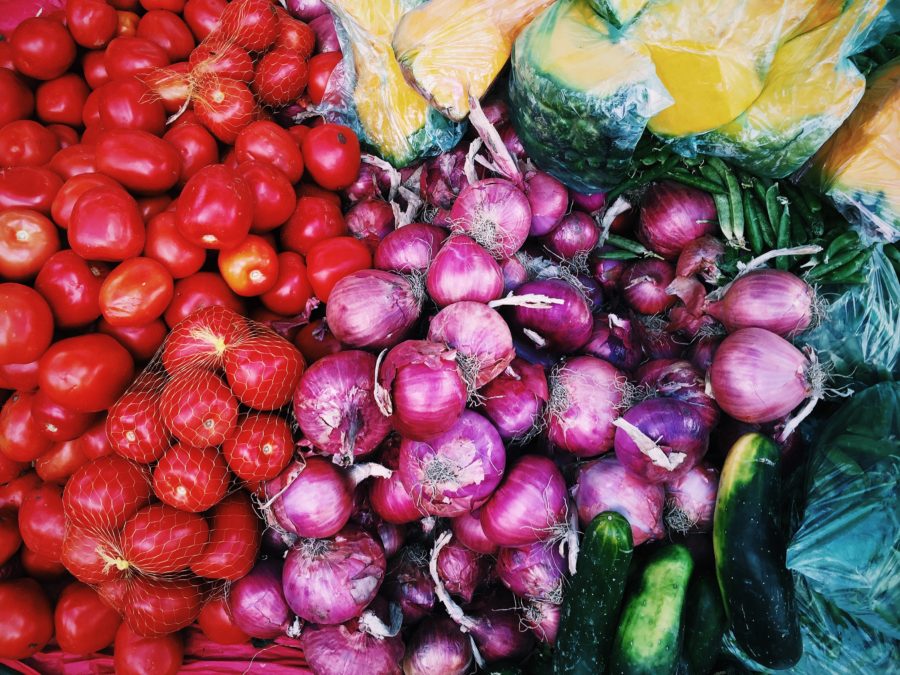 While it’s not a national holiday, Earth Day holds a special place in the hearts of many people. Those of us raised in the age of recycling drives and “An Inconvenient Truth” have a stronger sense than previous generations of just how much our actions can impact the environment. (I personally played a hydrofluorocarbon in my fifth grade musical about the environment, singing a song begging the audience not to release me into the ozone. If that’s not a picture of growing up in the 90s, I don’t know what is.)

If you’re contemplating how to do your part to help the Earth, ideas like driving less, recycling more, and toting reusable bags to the grocery store probably come to mind. While these habits are all commendable, there’s another, often overlooked aspect of everyday life that can have an even greater effect on the environment: the way you eat. From the astronomical amounts of water used to grow certain crops to the fossil fuels necessary for food transport, our eating habits use more resources than we often realize.

Don’t let your food choices hamper your efforts to live an eco-friendly lifestyle. Try the following strategies to eat better for the environment.

Sure, you live in New England, but that doesn’t mean you can’t eat salmon from Chile…right? The global food system has programmed us to believe we can have it all. It’s easy to overlook the resources required to preserve and transport foods from one side of the globe to the other. There’s even an official term for how far food must travel to reach the destination of your plate: “food miles.” Some experts estimate that a typical American meal travels an average of 1,500 food miles and contains ingredients from five different countries. The types of transport used to bring these items to your plate have varying levels of energy efficiency, too, from cargo ships (most efficient) to planes (least efficient). You can reduce this footprint by eating foods from close to home whenever possible. Visit your local farmer’s market for options guaranteed to be local, and begin taking note of labels on grocery store produce–generally, they’ll tell you where an item was grown.

Just like eating locally, eating seasonally also benefits the environment. You may have a hankering for asparagus in December or pumpkin in March, but when foods aren’t in season near you, they must also be transported to your area, often over long distances, racking up fossil fuels. Or if produce is grown out of season close to home, it typically requires special conditions, such as extra pesticides.

Not sure what’s in season in your neck of the woods this time of year? Visit the Seasonal Food Guide to search by state and season. In addition to the environmental perks, you’ll be adding some healthy variety to your diet!

Producing one pound of beef requires 1,847 gallons of water for production, while one pound of chicken uses 518. Tofu takes just 302 gallons. Cattle are also responsible for an abundance of harmful methane emissions and land degradation throughout the world. You don’t have to go vegetarian to make an impact for good—cutting back even a little on beef (say, instituting a “meatless Monday” in your house) will save plenty of precious resources.

Leftover food and food scraps take on new life as fertilizer through composting. Putting this kind of trash to good use keeps it from sitting purposelessly in a landfill. Don’t want to do the dirty work yourself? Up-and-coming companies now offer composting services for low monthly rates. Check out Compost Now to find one near you. Or if composting on your own isn’t for you, some municipalities have locations where you can drop off your compostable materials or pick up composted soil.

While some restaurants donate commercially unusable (but still totally edible) produce to food banks, many participate in produce co-ops. These programs sell less-than-perfect food items to the community at bargain basement prices. Organizations like Bountiful Baskets have locations in multiple states, where they offer Saturday pickup of dozens of pounds of produce for a contribution of just $15, typically at farmer’s markets or other predetermined times and places. Purchasing food that would otherwise get thrown away reduces waste and helps maintain the Earth’s valuable resources.

Get educated about what’s sustainable:

“Salmon, almonds, avocados” reads like a list of target foods to work into your diet. But these healthy options are among many that have a hidden cost: their lack of sustainability. In recent years, salmon production has suffered the devastating effects of overfishing, while almonds and avocados guzzle inordinate amounts of water (as much as one gallon per almond, according to some estimates).

While these statistics may sound dismal, doing a little research on sustainable foods can inform you to make more earth-friendly choices. Instead of almonds, you might choose Brazil nuts, which require far less water (or try pea milk instead of almond milk). Check out a sustainable seafood guide, or when grocery shopping, ask the butcher or produce manager about their stock: Where did it come from? What kind of information do you have about how it was grown? They may know a lot more than you might think.

Incorporating sustainable food choices into your lifestyle, on Earth Day and every day, may do more for the planet than all other efforts combined. Who knew you (and your fork) could make such a difference?