Thou Shalt Not Troll 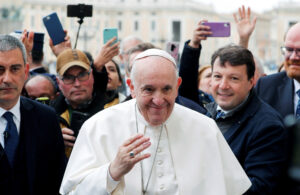 This year for Lent, Pope Francis is calling on people to give up something other than chocolate  — trolling. When shielded by the anonymity of a screen, it is too easy for Catholics and non-Catholics alike to say unkind things to one another. Twitter, Facebook, and Instagram are all flooded with strong opinions that can spiral into personal attacks. Especially during Lent, when Catholics are supposed to do good deeds and allow more space for God in their lives, practicing patience online is a great way to do this. So this year, instead of (or, in addition to) giving up dessert or alcohol, listen to the Pope and be a little more compassionate online. Read more.

Los Angeles County has opened up new “flex voting” centers that allow residents experiencing homelessness to participate in politics. Some residents explained that they had previously felt that voting was too difficult for people experiencing homelessness, and that this excluded from the election process. But now, thanks to the new incentives for voter registration and the presence of “flex voting” centers, more residents are able to participate. A former Marine and Gulf War veteran wore his “I voted” sticker with pride, and expressed such joy in being able to vote for the first time in over 25 years. Read more.

Biker Gang Makes It Their Mission to Protect Abused Children

There’s a new biker gang that everyone’s talking about, but for all the right reasons. BACA, Bikers Against Child Abuse, “is an international nonprofit that recruits volunteer bikers as a support system for kids suffering from parental abuse.” The bikers try their best to befriend the children and make them feel as safe as possible, even gifting the children with their very own BACA vest. The group of Bikers, who go by non-threatening pseudonyms like “Pooh Bear,” let the children know that they are there to protect. For example, if a child is afraid of an abuser showing up at their home, the leather clad biker gang will stand watch outside the house until the child feels safe. Or if a child has to give a testimony in court, the BACA bikers will escort the child to the stand and offer support from the audience. Read more.

The most adorable thing on TikTok? Old Man Steve. TikTok is not only for viral dances and challenges, but also for 81-year-old Steven Austin and his wonderfully wholesome videos. Although many of his videos show him “cooking” in a colorful bucket hat, Austin doesn’t consider himself an actual cook because most of his meals, like frozen biscuits and peach preserves or Marie Callender’s frozen dinners, are incredibly simple. However, no matter what he is doing, Austin will make you laugh and smile while watching his videos. Austin is no stranger to social media, he used to use Vine and he has his own YouTube channel. Read more. 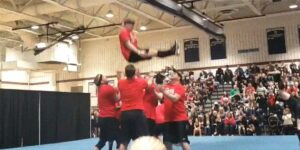 The only thing we love more than “Cheer”? Cheerleading dads. A group of dads from New Jersey decided to support their cheerleading-loving daughters by creating their own cheer team. This group of dads rehearsed for six practices before putting on a show in front of a crowd at their daughters’ competition. All of their practice paid off, because these dads stole the show! And while they did not bring home any trophies, they did go home having made their daughters very happy. Read more.