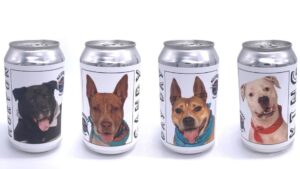 Last November, we shared the story of a new trend of local breweries adding pictures of adoptable dogs to their beer cans. Today, we are bringing you an unexpected and heartwarming development: Minnesota resident Monica Mathis was scrolling online, when one pup’s face in a post from a local brewery caught her by surprise. When she first saw the images on the cans, she stopped and thought, “Oh my gosh, that’s Hazel!” Mathis had lost Hazel two years earlier, and due to missing paperwork for Hazel’s microchip, they were never able to find her. The Manatee Humane Society, where Hazel has been kept, is now working with Mathis to get Hazel home for free. Read more.

Next time you’re in the Bronx, check out this family-owned convenience store, and you might be able to win as many snacks as you can carry! Ahmed Alwan, 20, has been working at his family deli since he was a teenager and knows how many people in his neighborhood are struggling financially. So, Alwan found a way to simultaneously entertain and give back. He began using TikTok to ask patrons to answer basic math problems, and if they get them right, they can take as many snacks as they can carry in five seconds. The resulting TikToks are filled with math, free snacks, and tons of laughter. Read more. 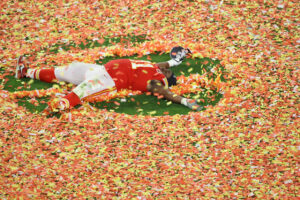 A Win for Kansas City Is a Win for Shelter Dogs

Following their Super Bowl win, Kansas City Chiefs’ defensive tackle Derrick Nnadi celebrated by paying off the adoption fees for over 100 dogs at KC Pet Project animal shelter. This generous act was a perfect ending to a season-long collaboration between the KC Pet Project and the Derrick Nnadi Foundation, where the foundation had pledged to cover the adoption fee for one animal with each Chiefs win. Read more, and maybe even find a way to volunteer or support a no-kill shelter near you!

FaceTime Helps Connect a Fan With His Hero

While meeting with fans at the Holland Bloorview Kids Rehabilitation Hospital, NBA All-Star Kyle Lowry used FaceTime to introduce a fan to his favorite basketball player. After the fan let Lowry know who his favorite NBA star is, Lowry decided to connect the two via the magic of modern technology. In a video that captures the heartwarming moment, Lowry FaceTimed his friend (and guard for the Miami Heat) Jimmy Butler, allowing him and the fan to talk for a few moments. It was a slam-dunk moment one fan will never forget! Read more. 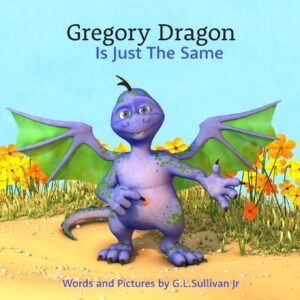 Greg Sullivan is an award-winning artist, animator, screenwriter and novelist, so when his son started struggling in school, it made sense that he would find a creative solution. When his son started feeling like he didn’t quite fit in, Sullivan wrote “Gregory Dragon Is Just the Same” to help his son “not only embrace his unique characteristics but to celebrate them.” The story of Gregory Dragon is told with a clear yet creative narration that teaches readers the power of owning your own story and has been shared with friends, classmates, and family members ever since it’s original publication. Read more.