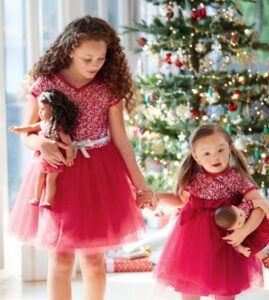 When fans of American Girl dolls viewed the October catalog, they saw 4-year-old Ivy Kimble standing in front of a Christmas tree, her hair in pigtails, wearing a sparkly red Christmas dress and holding her baby doll (who was, of course, wearing a matching dress). Ivy’s feature in the catalog was a milestone moment for the youngster. Ivy has Down syndrome, and the feature is a step toward inclusion for other little girls who are underrepresented in the media. It was also a huge deal for Ivy, who was so excited to be a part of the catalog. Read more.

Twenty one-year-old David Bloch has been non-verbal for the majority of his life. He recently reached an important milestone that his mother, Kerry Bloch, posted on Twitter, “My 21-year-old autistic son has no communication skills. Today, he asked me his first question ever. It was. ‘Would someone like me?’” This caught the attention of the internet, with David receiving an outpouring of love from people who confirm they definitely like him, including NBA star Joe Ingles of the Utah Jazz. Ingles, whose own son was recently diagnosed with autism, even replied to Kerry with a surprise gift: “Kerry, there is 2 people in Utah that like your son a lot, my wife @RenaeIngles & I! We would love to invite you guys to a Jazz game! plz let me know & I’ll sort it out!” David loves basketball, so he and his mother are both overjoyed by Joe Ingles’ kindness. Read more. 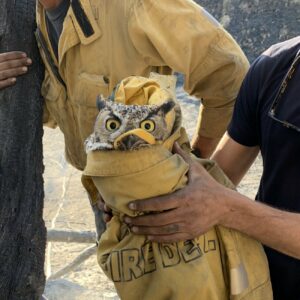 The Maria Fire in Ventura Country, CA is now 100% contained, thanks to the brave firefighters who worked tirelessly to put out the flames. Thankfully, no one was injured in the fire, and there was even one extra special rescue made by California firefighters. A great horned owl named Ram (after Los Angeles’ own football team) was found in the ashes and is now making waves on the internet for his very photogenic rescue. One photo features firefighter Caleb Amico with the very photogenic owl peering out over Amico’s jacket. Ram is now being treated, but is expected to make a full recovery. California Wildlife Rehabilitation posted to twitter saying that the owl will be released back into the wild soon. Read more.

“Help You With Your Homework, Just a Little!” Second Graders Sing About Learning to Lizzo’s “Truth Hurts”

A second grade teacher put a new — and educational — spin on Lizzo’s hit song “Truth Hurts” for her students. Dorothy Honey Mallari adapted the lyrics so they would feature important lessons for her 7 and 8-year-olds; taking turns, being on time, and being kind to one another. Every morning, the whole class dances around and sings their own version of the song to get them prepared for the rest of the day in a fun way. Read more. 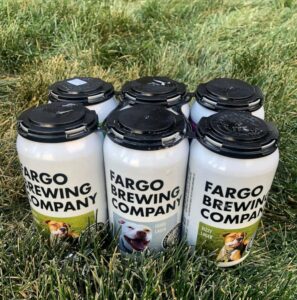 Jerad Ryan is a graphic designer and a volunteer with “4 Love of Dog Rescue,” a North Dakota animal rescue organization. He recently came up with a brilliant plan to help out “One-der dogs,” or dogs that are considered harder to adopt. They don’t socialize well with other dogs, so they need to be in one-dog only homes and can’t attend adoption events. Jerad decided to combine his passion for dog adoption with graphic design to create a fun ad campaign for these extra-special pups. He created labels for beer cans that feature “One-der dogs” to show them off and bring awareness to their need for adoption. These beer cans can be found at Fargo Brewing Co. in North Dakota. Cheers to a great cause! Read more.