My best friend and I are the ultimate dynamic duo. Through good times and bad, we can always count on each other for companionship, compassion, honesty, and usually a good amount of laughter. Plus, like many deep friendships, ours includes a lot of shared history–vacations together, seeing each other through break-ups, helping each other cram for finals, going to just about any event or party in tandem, and so much more.

One particularly deep bond we have was forged over the greatest franchise in the history of cinema (other than “The Land Before Time” movies): “Star Wars.” This week, we’ll get to head back to movie theaters to see the origin story of one of the other great dynamic duos of all time, Han Solo and Chewbacca. And the more I think about it, the more I realize that the universe’s greatest smuggler and everyone’s favorite Wookie have taught us some valuable lessons about friendship.

1. We understand each other, even when no one else can

“Raaaaaahhgh aaaaahnr uuh uughguughhhghghghhhgh huurh aarrragghuuh wwrrhw” is the approximate Wookie translation for “Sometimes it feels like no one understands me, but my best friend never fails.” That’s because best friends speak their own language. My best friend’s dad once said that seeing my BFF and I together is like watching two people on their own island, and the rest of the world just gets to peek in and catch a glimpse of what’s going on. No one else really understands Chewie (not even C-3PO, who speaks six million languages) but Han never hesitates to fill the rest of the group in on how Chewbacca feels in a given situation. And that’s all Chewbacca really needs–to feel heard.

Chewie is very competitive when it comes to board games like Dejarik. Han knows this quirk about his best friend, so he lets C-3PO in on a secret strategy when playing with his friend: “Let the Wookie win.” My best friend is pretty competitive too. She loves this word game from her childhood called Bananagrams. Not to brag, but I happen to be the greatest Bananagrammer of all time. I’ve considered a career of playing Bananagrams on a boardwalk for cash. If I win 12 games in a row, as I’ve been known to do, my best friend can get pretty upset. And I don’t want that. There are more important things than winning, after all. So I may adjust my strategy and “let the Wookie win,” because the fun part of playing a game with my friend isn’t beating her–the fun is in the time we’re spending together! But please don’t tell her, she’ll get really mad.

Nothing was better than seeing Han and Chewie together again in “The Force Awakens.” Thirty years since we’d last seen them on screen, but their friendship was clearly as strong as ever. Not only did it warm my heart to see that they’re still best friends after all this time, but the movie really went out of its way to highlight their relationship.

Once of the most iconic props from the original trilogy is Chewbacca’s bowcaster. It was in every movie, came with every action figure, and is instilled in every Star Wars kid’s mind. Well, after 30 years of seeing Chewie wield what is essentially a laser-beam crossbow, Han decides to ask, “Can I borrow that?” And Chewie’s response is, “Uugggh aaahnruh,” or “Yeah, sure.” Imagine that your best friend asks you to borrow some beloved heirloom or cherished item of yours. If your instinct is to say, “Yeah, sure,” then you’ve truly reached Chewie and Han levels of best friendship.

4. Friendship should be a priority 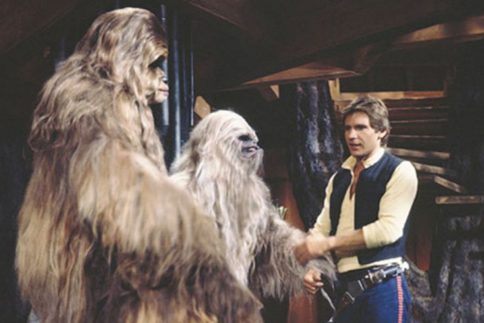 Perhaps the greatest lesson of all comes not from the four (soon to be five!) canon “Star Wars” films in which Han and Chewie appear, but in the infamous “Star Wars Holiday Special!” The plot hinges on Han getting the Rebel Alliance into a whole lot of trouble, all because his Wookie pal wants to get back to his homeworld of Kashyyyk in time for Life Day (the Wookie equivalent of Christmas). The galaxy is still under the oppression of the evil Empire, the gangster Jabba the Hutt has called a hit on Han for a failed smuggling operation, and the bounty hunter Boba Fett is hot on their tail. But somehow Han still makes time to fly his best friend home for the holidays. If you have a best friend, you know what it’s like to drop everything when that person needs something, and you know that you wouldn’t have it any other way.