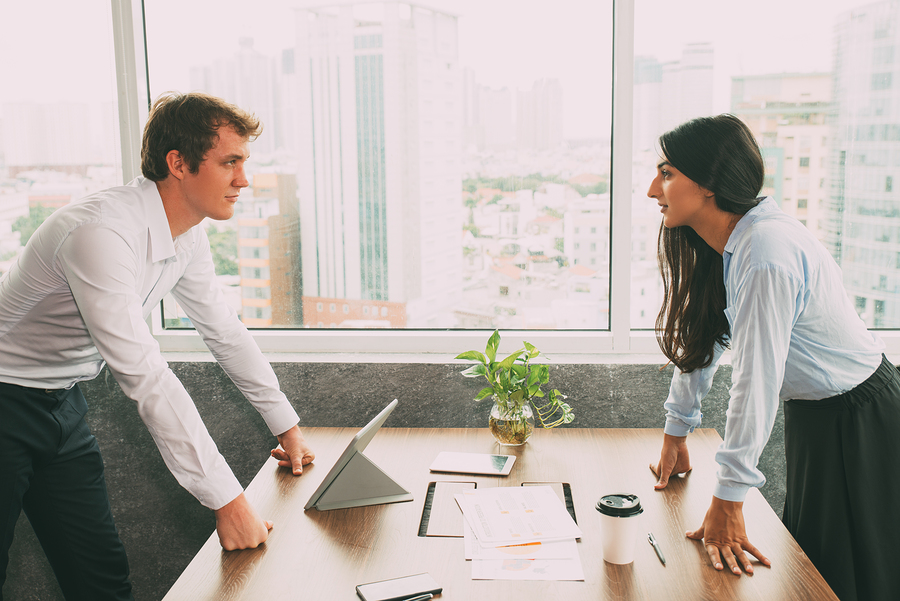 I used to work with a bully.

Long before I worked from home, I had a job at the front desk of a hotel. I loved my job, but my enjoyment was clouded by my dread of interacting with a specific coworker. One of the worst parts of working with this person was that she was unpredictable. She often sang my praises, and then manipulated, embarrassed, or insulted me out of nowhere.

It was exhausting working with her, because I never knew what to expect. I’d have a nice conversation with her between shifts and then another coworker would repeat something terrible she had said about me.

When I was promoted to be her supervisor, things really came to a head. Honestly, I was intimidated by her and she took advantage of it. She was louder than me, she knew exactly how to shake me up.

She called in repeatedly, not offering an explanation as to why, showed up late to work, and even got into arguments with our customers. I was supposed to be her boss, but she was a bully, and I wasn’t sure how to stand up to her. In desperation, I turned to a superior for advice, and she helped me sort out exactly how I would stand up to my coworker. Here’s what I learned from the whole thing.

The first thing I had to do is decide what I could and couldn’t tolerate at work. I was willing to ignore attitude from time to time and would even turn a blind eye to her gossip, for the sake of keeping the peace. What I wasn’t going to ignore was her using her height and my small stature to physically intimidate me with threatening body language, yelling at me, or raising her voice at the guests at our hotel. Knowing my boundaries helped me decide how to move forward.

In a healthy relationship, it makes sense to talk through why something is hurtful or why you wish a person would behave differently. When you’re dealing with a bully, any kind of explanation is a waste of your breath. I learned quickly to keep it simple in response to her bullying. Instead of trying to reason with her or try to get her to see my perspective, I rehearsed simple and straightforward phrases I used repeatedly in different situations.

For example, if she was getting angry with a guest, I simply told her she wasn’t allowed to speak that way and told her to leave the desk. If I was the target of her bullying, I would typically say, “I won’t allow you to talk to me like that,” and walk away. It was simple and it was effective, she wasn’t used to me standing up for myself.

In my situation, I was my bully’s superior, so I was able to discipline her for poor conduct. I learned to keep meticulous records of her behavior, writing her up anytime I could make a case that she had broken some company rule or guideline.

Even if you don’t have authority over the bully in your life, keeping a record of their actions is important. I suggest printing any emails that are abusive in any way and keeping notes for yourself when in person interactions turn into bullying. Eventually, you may need to get someone else involved and you will want to have proof that they have been out of line.

Get someone else involved

Eventually, the only thing I could do to address my bully was to involve a superior at work. I had done everything I could, including writing her up multiple times, and she still continued to yell and insult others when she couldn’t get her way.

So, I set up a meeting with human resources and our general manager to discuss what should be done next. I brought along all of the notes I had made of her behavior. In the end, she was put on probation and never came back to work. In any situation when there is a bully who won’t respond to strong boundaries, it’s a good idea to involve a third party. Chances are, you’re not the only one being pushed around, and someone with authority needs to be made aware of the situation. By speaking up, you might help prevent further abuse and bullying of others in the future, making your workplace more peaceful for everyone who works there.