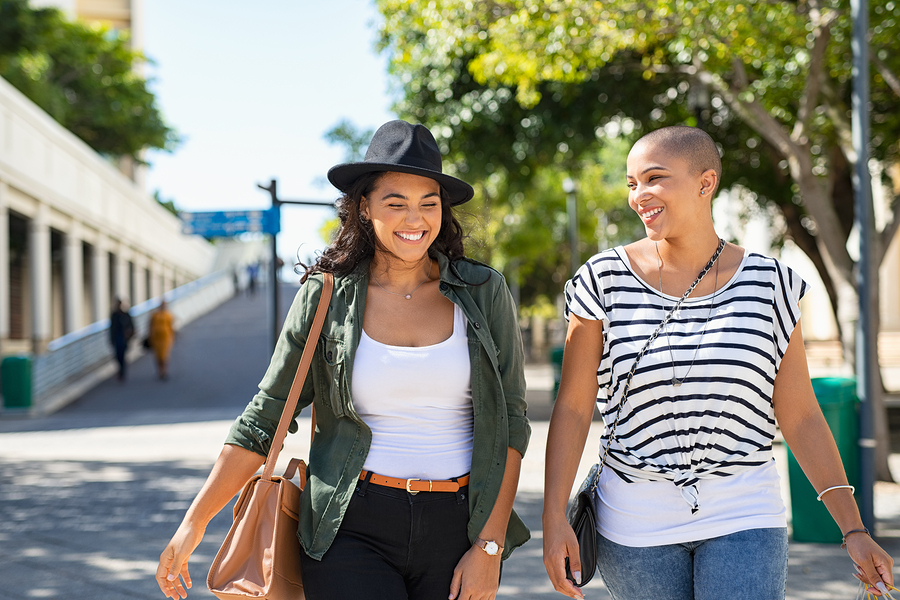 The first time I saw my best friend Sara, her wrist was in a cast covered in signatures. It was 1992, and we were in first grade. At that age, nothing could be cooler than having a visible injury. With her fair skin, obsidian hair, perfect cheekbones, and plaster-set wrist, she looked like an edgier Snow White.

Despite this indelible first impression, though, we didn’t become friends until third grade—the first year we were placed in the same classroom. We started hanging out, and I went to her “Gone with the Wind”-themed birthday party. Yes, you read that right. At the age of 9-going-on-10, my best friend had a Southern Gothic-romance-themed birthday. When Sara opened the Waldenbooks gift certificate I gave her, she was genuinely excited—it turned out we both loved to read.

Both dreamers and strong-willed go-getters, Sara and I have been inseparable ever since.

Although we’ve had tense moments, fights in public (once), and a weird period in fifth grade when we stopped being friends (I honestly don’t remember why), it has always felt remarkably easy to be friends with Sara. And I’m spilling some secrets to our long-term friendship success.

To make the best pizza, you gotta start with fresh ingredients. Similarly, a sterling friendship is built on a foundation of superior traits. Sara is razor-sharp, unconditionally supportive, worldly and erudite, and makes me laugh constantly. It’s impossible to get tired of a person like her, who carries your deepest secrets and also lets you be your goofiest self. Once, I told Sara that my brother had made me cry. Sara, dramatizing our confrontation, affected a heavy Italian accent and said, “Why you make-ah your Nonna cry?!” It cracked me up and made me feel better instantly. Now we always say that to each other when one of us is upset.

This one’s a doozy! But no relationship, be it romantic or platonic, will survive over the long-term if you don’t master it. Sara and I haven’t always been pros at this (see: the busy periods when I stopped communicating with her entirely; her occasional difficulty saying what she feels). And we haven’t always been mature about it (see the aforementioned fight in public—the subject of which was Taylor Swift. She disliked her, I jumped to defend Tay’s honor, and things spiraled into an exchange of testy words. I might have even called Sara a mean name. Maybe.).

But as we’ve gotten older, we’ve gotten better at telling each other what we really think in a direct but non-confrontational way. Cliche as it sounds, I think it helps to use “I” statements when discussing a touchy subject. (“I feel like you sometimes let people take advantage of you, and it makes me sad.”) And don’t even bring it up if you’re feeling emotional or overwrought. A weighty topic is best approached from a place of calm, restfulness, and clarity.

If I’m dating someone I shouldn’t be dating (and I know it), Sara reminds me that I’m only short-changing myself if by prolonging the relationship. If she’s stressing about trying to single-handedly plan and host a bridal shower, I remind her to make a list of tasks and divide them evenly among her fellow bridesmaids. We hold each other accountable, helping each other grow and nurturing our best qualities, which only makes our friendship stronger.

Do things they love

Loving someone means joining in on their fun, even if it’s not your particular flavor of good times. Sara let me drag her to Harry’s Bar in Venice for a $20 Bellini even though we were broke, backpacking postgrads. This past year, I dressed up on Halloween, even though I couldn’t care less about the holiday, because Sara loves a costumed night out. Sometimes, you sacrifice your own wants, especially if it means doing something painless that will bring the other person joy.

The best thing Sara and I do to maintain our decades-long bond? We text or talk almost every day. Checking in with her has become part of my daily routine. Our lives get busier all the time, so sending a few texts (or a lot) is an easy way to stay in each other’s lives and let the other person know we’ve always got their back.

Sara is the Ruth to my Naomi, the Gayle to my Oprah, the Tina Fey to my Amy Poehler. She’s my ride-or-die, and I couldn’t be more grateful to go through life with her.