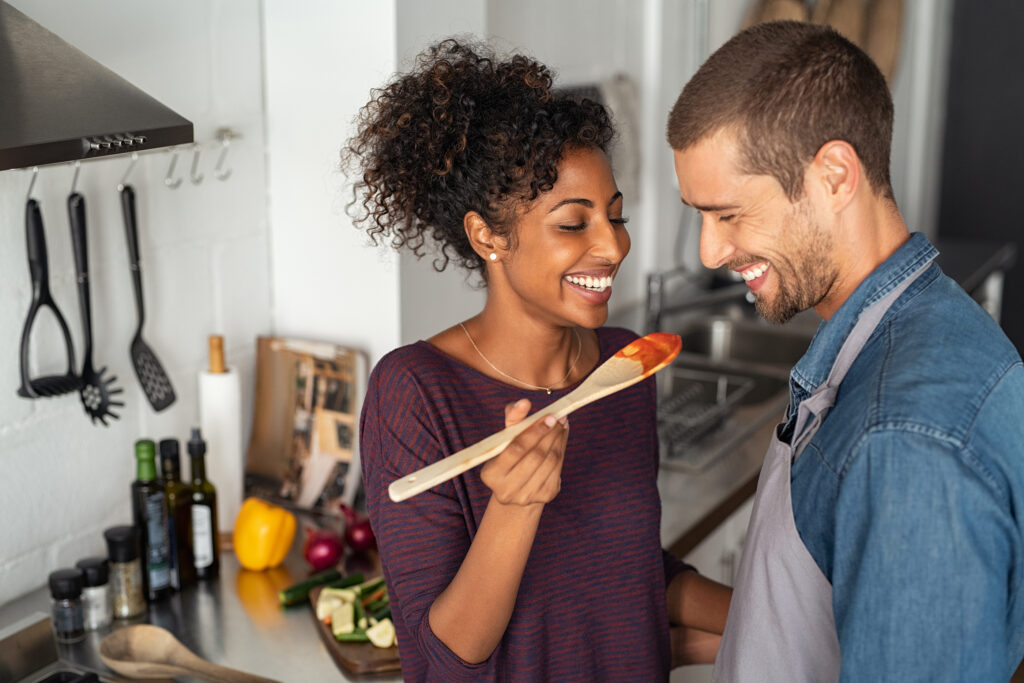 When the COVID-19 pandemic sent the world into lockdown, we all had our own set of problems to face. My biggest struggle — aside from keeping myself safe from the virus, of course — was cooking with my partner. The only time we had our stove on prior to the lockdown was to cook instant noodles for late-night suppers.

It would only take mere moments before we’d be at each other’s throats for forgetting to defrost the chicken or not cutting the vegetables the right way. It felt as if we were contestants on “Hell’s Kitchen” instead of a couple attempting to cook one-pot pasta from a recipe that promised it would only take half an hour. The turbulent time spent in the kitchen no longer seemed to warrant the cheaper-than-takeout yet average-tasting food, especially since we would then eat our dinner in deathly silence.

RELATED: The Beginner Cook’s Guide to Setting up Your Kitchen for Success

We weren’t willing to let cooking together ruin our relationship, so we had to learn to communicate better, both inside and outside the kitchen. Here are some of the things I learned after overcoming our chaotic time in the kitchen, and how they eventually strengthened our relationship:

Watching our tone in the kitchen

Usually when my partner and I cook together, one of us preps all the ingredients while the other works near the stove. With a wall between us in our kitchen layout, we would yell at each other to communicate, and background noise just made it all the more difficult to hear.

It was easy to get frustrated, especially when we were assigning tasks to one another. Yelling at each other, although we were only doing it to be heard, only made our blood pressure rise while straining our communication.

RELATED: Want a Healthy Relationship? Turn off the Scoreboard

Now, we make it a point to talk softly and gently after taking the extra step — literally — to go over to the other person. Watching your tone when talking to your loved one may seem like a small thing, but it’s hard to do when you’re in a hot kitchen and all that’s on your mind is to quickly get it over with. It was the first step we took to communicate better and it worked wonders almost immediately. We’re far less irritable and aren’t as quick to jump into an argument over trivial matters.

Learning to hand over control

My partner takes a more experimental approach in the kitchen and is often tempted to throw whatever he can find on our shelves and in the fridge into the pan on the stove. While we were cooking kimchi stew with ramen, he suggested dumping a cup or two of milk into the pot. When he told me he was cooking risotto, he didn’t tell me that he was going to substitute rice for corn. And whenever I handed him a recipe to follow, he would always disregard the steps and just improvise.

Needless to say, this irked me, as I hated not knowing what was going to end up on my dinner plate later. However, I soon realized that I was treating him as my sous chef in the kitchen, and that was definitely not the right approach to take. I made a conscious decision to be more open to his suggestions, and it certainly helped when some of his creations actually turned out delicious. Cooking together is a collaborative act, and that means that we both get to have a hand on the reins.

Becoming more supportive and kind to each other

Seeing as we are both amateur chefs, there have been times when the food we put out was far from delicious. Once, I tried my hand at whipping up a Chinese-style scallion pancake, and we ended up biting into a thick, doughy, and completely raw center. My partner and I are both well aware of that awful feeling that creeps up from your gut after messing up a meal.

But, it’s also exactly this reason that we’ve both become more supportive and encouraging of each other. Instead of putting on a show and saying that the food is absolutely delicious when it’s not, we’ve learned to laugh it out.

We also grew kinder to one another whenever mistakes happened. I once burnt the bottom of our newly purchased pot and ruined the congee inside that was meant to last us two days. I immediately became dejected, but my partner convinced me that we could just make a new batch and scrub the pot with a metal sponge. All of a sudden, my mistake didn’t seem as horrific anymore, and we got to enjoy a really good bowl of congee at the end of the day.

Coming to appreciate our time in the kitchen together

I’ve now come to love cooking with my partner because it’s become so much more enjoyable. While some of his little touches to recipes still catch me by surprise, I’ve learned to embrace his creative soul while he’s now more appreciative of my by-the-book approach — especially when it comes to sauces and pastries.

In fact, we’re now so proud of our food that we’ve reached a point where we actually prefer our home-cooked meals over regular takeout food. We’re even thinking of hosting regular dinner parties for our friends and family once the pandemic situation tides over. You’re welcome, friends!