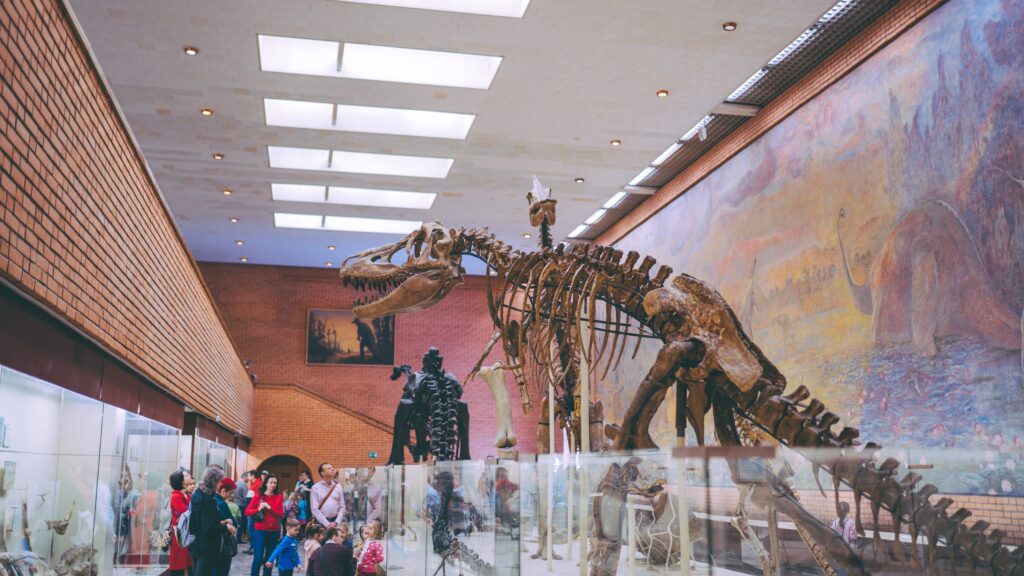 There are few places I’d rather spend an entire day in than the fossil halls of a natural history museum. Ever since I was a kid, I’ve been fascinated with dinosaurs and the fossils they left behind.

During and after my time in college, I had the immense privilege to work hands-on with fossils as a volunteer paleontology lab tech and collections assistant. I got my start in the Department of Anatomical Sciences at Stony Brook University and later moved on to the Division of Paleontology at the American Museum of Natural History (AMNH) in New York City.

My time in the world of paleontology taught me invaluable life lessons that I’ve applied to my new career as a freelance writer. How could old bones possibly teach me anything about writing? You’d be surprised! Fossil preparation instilled in me the importance of patience, perseverance, honesty, and a passion for learning, all of which have been of tremendous benefit to me as a writer.

One of my tasks in the paleo lab was to remove fossils from the sediment in which they’d been collected. This process is methodical and time-consuming, requiring considerable concentration and restraint. Dental tools and paint brushes can be used to remove soft sediment, but hard rock may require the use of a pneumatic tool called an air scribe.

Fossil prep can’t be rushed; hastiness risks damaging the fragile specimens. But, in my enthusiasm to see a fossil in all its glory, I sometimes worked faster than I should have, which led to mistakes that cost me hours of extra work. I soon learned the value of patience and attention to detail.

As a freelance writer, I’m often working against deadlines, which can tempt me to rush my early drafts. But I’ve found that this often results in a lot more anxiety during the revising and editing phases. I’ve found that paying reasonable attention to important details like grammar, style, and voice in the drafting phase actually saves me time and anxiety later.

At Stony Brook, I helped research a fossil mammal skull from Madagascar. For several months, I spent hours a day in front of a computer screen rendering striking 3D images of the priceless specimen. When the new species was finally announced to the press, I was thrilled that my work had contributed to understanding such an important discovery.

Later, when the Stony Brook lab was required to transport its entire collection of 10,000+ fossils to a museum in Denver, I was recruited to assist in the project. This endeavor took an entire semester to complete. When we finally finished labeling, packing, and loading the last specimens, I felt a sense of elation and satisfaction. Careful and persistent effort had paid off.

I’ve been able to apply this principle to other areas of my life, including freelance writing. Writing, like fossil prep, requires patient skill and dedication. Enthusiasm will only take me so far. As a wordsmith, I have to be willing to hone and practice my craft consistently, even on days when I really don’t feel like it. I’ve seen the rewards of my perseverance, as editors and readers alike have told me that my writing style has improved over the last two and a half years.

RELATED: If You Want to be Successful, Start Embracing Failure

Another common task of the fossil preparator is repairing damaged specimens. On one occasion I was brought a large dinosaur rib bone that had been broken into two separate pieces. A high-strength epoxy was needed to glue the fossil back together. My supervisor warned me to be careful; epoxy is tricky to remove once it sets. I set the rib upright in the lab’s large sandbox, relying on gravity to help seal the fracture.

Several hours later I was told the bad news: Epoxy had seeped from a crack and dried onto the surface of the bone! I was mortified, but I owned up to my mistake. I spent the rest of the afternoon tediously chipping away at the dry epoxy with metal tools.

Besides being the right thing to do, my honesty in the paleo lab earned me the respect of my colleagues. They began to allow me to work independently because they trusted me to be candid if I made mistakes and to ask for help when I needed it.

Honesty is a crucial virtue for any writer. If my readers don’t trust me, then I have nothing. This doesn’t mean that I’m obligated to share everything about myself, but it does mean I strive to be sincere, genuine, and straightforward when I am describing personal experiences. Readers are perceptive. They can smell disingenuousness a mile off and respect authenticity.

When I began volunteering in a fossil lab, it was clear that my years of book learning and innate curiosity hadn’t adequately prepared me for the more practical, hands-on aspects of paleontology. At first, I was intimidated and felt out of place. But I refused to let these anxieties paralyze me.

I was blessed to encounter many knowledgeable and supportive paleontologists who taught me new skills and eventually entrusted me with more important and elaborate projects. Even after leaving the natural sciences to pursue my writing career full-time, I maintain a habit of lifelong learning. In order to entertain, educate, and inspire our readers, writers should be constantly learning. This can be done not only by consistently practicing the skills of the craft but also by devouring as many books (both fiction and nonfiction, prose and poetry) as possible.

My fruit of childhood inquisitiveness and passion for reading has enriched my experiences both as a museum scientist and as a professional writer. I remember on one of my childhood visits to the museum, seeing a door marked “Staff Only” and asking my mom what lay behind it. She smiled at me and replied “Who knows? Maybe you’ll find out one day!” That curious child, eager to know more, eventually saw his dream fulfilled, and for that I’ll always be grateful.