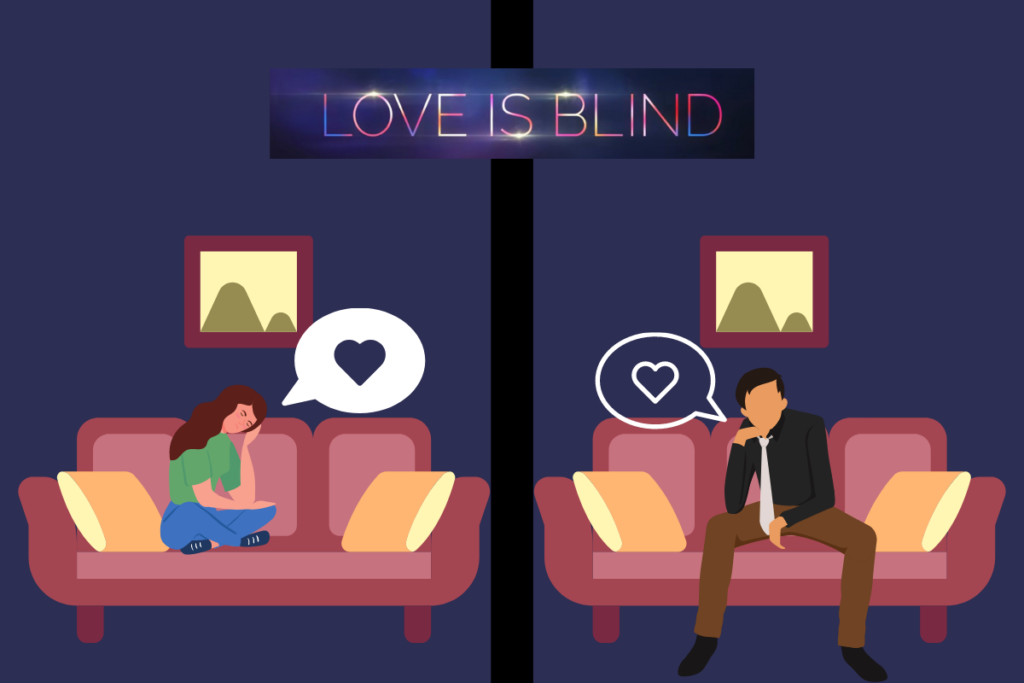 In March of 2020, I decided to watch season one of “Love Is Blind.” I thought I was in for a “hate-watch.” I had seen some “Love Is Blind” memes and wanted to see what the hype was about. Before I knew it, I was downloading episodes to my phone so I could keep watching on the subway. I was hooked.

This unique dating show is Netflix’s viral take on the trope of a reality dating show. On the show, men and women are placed in “pods” where they sip their favorite drink and talk to strangers they cannot see in an effort to discover if an emotional connection can trump a physical one. At the end of the week, if a pair decides to get engaged, they finally get to meet in person! The rest of the show is a condensed version of the traditional path to the altar. The contestants go on vacation together, meet each other’s families, and move into a new apartment together. By the end of the show, some relationships end in marriage, while others do not.

Lesson #1: Just because someone is good, does not mean that they are good for you.

It is hard to find anything negative to say about Kelly and Kenny. Kenny is a nice guy who is close to his family and Kelly is a fitness instructor who hasn’t yet found the right guy for her. Throughout the show, they were funny, affectionate, and earnest. Yet, at the moment when they were set to say “I do,” Kelly said… “I don’t.”

Both Kelly and Kenny were seemingly great people, but that does not mean that they were meant for each other. It can be hard to say goodbye to someone that you enjoy being around. But, maybe, by saying goodbye, you are opening up the opportunity for someone even better to come into your life.

Throughout the series, it seemed like Giannina’s feelings toward Damien would come and go, while Damien was consistently head over heels. Therefore, when they got to the altar and Giannina said “I do” and Damien said “I do not,” I audibly gasped. They cried, ran, and fought their way to the end of the episode. They were over. So, I was shocked when, during the reunion episode, Giannina and Damien shared that they were back together. Now that they have stepped away from the intense construct of filming a reality TV show, they have had the chance to address their issues and build a stronger relationship.

Who in your life deserves a second chance? Is there a friend who hurt your feelings who you could reconcile with? A partner who you might have said goodbye to too soon? For me, I know that both friends and books alike have deserved second chances. People who may have rubbed you the wrong way at first might have just been having a bad day. Or maybe you weren’t in the right mood to read that book when you picked it up the first time. Maybe you can take a page out of Giannina and Damien’s book and give someone another chance.

Lesson #3: Finding a partner won’t solve all your problems.

For me, watching Jessica and Mark navigate their relationship was painful. Mark came off as nearly desperate as he endlessly tried to get Jessica’s affection. Jessica, on the other hand, could not get over her infatuation with Barnett. She has publicly said that she drank too much and was dealing with her dog’s medical crisis during the filming of the show. She needed to get to a healthier place as an individual before she could be in a healthy relationship.

It’s easy to think that finding a partner will make you happy. But the reality is, if you are unhappy with your life without a partner, you will probably still be unhappy with them. We should look for partners to complement us, not complete us. What can you do right now to make yourself happier? Try joining a new gym, a book club, a Bible study, or maybe even taking a class. Hopefully, when you do meet a great partner, they will enjoy doing this new hobby with you!

Lesson #4: Find someone who brings you joy!

There are two couples who can be seen as real success stories from the Love is Blind “experiment”: Lauren and Cameron, and Barnett and Amber. Both couples have remained married since they each said “I do.” You can tell that the individuals in these couples bring each other so much joy.

While every relationship is going to have rocky patches, it is important to find someone who you can laugh with. While so many couples reported that being in quarantine put stress on their relationship, Lauren and Cameron seem to have found a ton of joy and laughter. If you haven’t seen their hilarious TikToks of them recreating scenes from the Titanic, you’re seriously missing out. Ultimately, it will be a shared set of values coupled with the ability to laugh with each other that will help you get past their rocky patches.

Not all of us are interested in finding true love while sequestered away in a pod — or in getting engaged less than a week after first speaking to someone. However, maybe we can use some of the lessons learned from “Love is Blind” in our own dating lives.