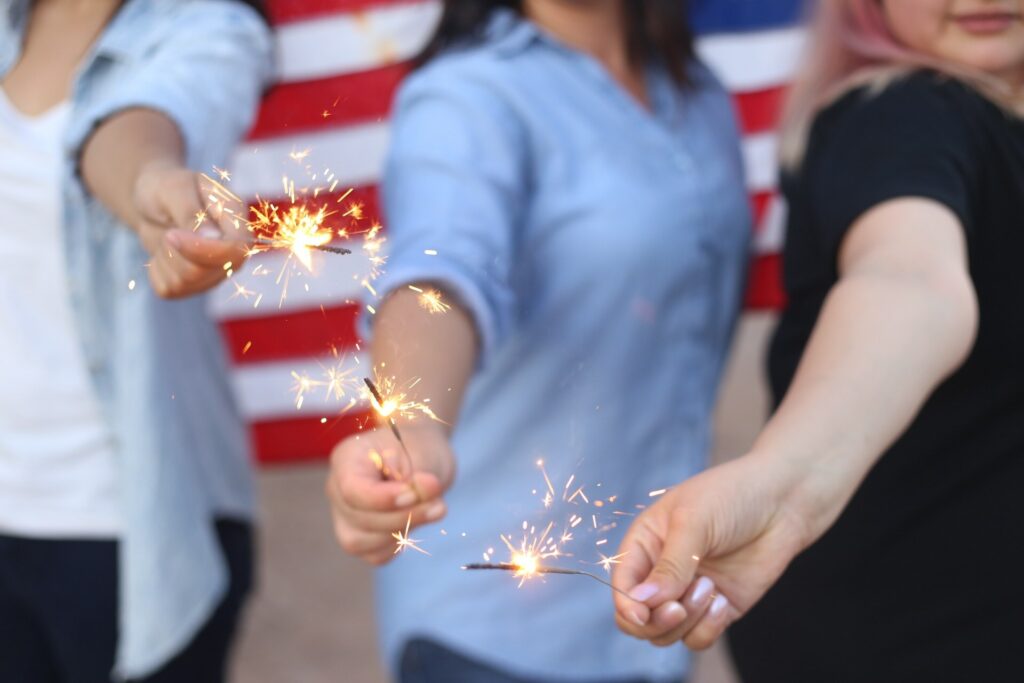 Coming from a family with a strong love of holiday traditions, I’m more than mildly surprised that our Fourth of Julys vary so much from year to year. Unlike holidays like Christmas and Thanksgiving, my Independence Day celebrations don’t follow any long-standing family traditions. In fact, just about the only tradition we have around this holiday is our lack of one.

The lack of tradition means that every year’s celebration looks a little different, which I find pretty fun. While I’ve discovered that keeping an open mind is the key to making Fourth of July special for me, there are a few things I try to incorporate for a successful holiday.

The land of picture-perfect Pinterest desserts has led many people astray, my sister being one of them. Independence Day 2017 is burned into both our memories and our stomachs thanks to a cheesecake recipe she found on Pinterest. In the days leading up to the Fourth of July, she combed through numerous recipes, looking for just the right festive dessert.

It came in the form of a JELL-O cheesecake crafted into the shape of a watermelon. To be fair, I didn’t entirely hate it and was even slightly disappointed to see it tipped into the compost bin. (Can JELL-O cheesecake even decay? We’ll find out one day.) It was, however, overwhelmingly rich and, one slice in, our stomachs were loudly protesting. There would be no finishing something that heavy.

There have been Fourth of July recipe successes, though. Just last year, my friend Emma hosted a multi-course Fourth of July dinner party that showcased a host of recipes from a Syrian cookbook. Emma loves learning about other cultures and sharing recipes from other countries with her friends. We sat in her garden, nibbling kibbeh as Emma shared background on each dish and fireworks exploded over our heads.

I‘m still a supporter of Fourth of July classics like JELL-O squares and potato salad. One of the neat things about America, though, is that there are so many different cultures. It can be fun to spend the day learning about other cultures and incorporating foods from different countries into our own Fourth of July menus. Half the fun is the cooking process itself and the other half, depending on the results, is sharing your new creation with friends and family.

Celebrate with the neighborhood

Growing up, my sisters and I could usually count on riding in the neighborhood’s annual Independence Day parade. The night before, we’d weave streamers throughout our bicycle spokes and paw through our dressers in search of red, white, and blue clothing. A neighborhood carnival followed the parade, and I spent more than one humid Fourth of July afternoon with thighs sticking to a metal folding chair, trying to keep my hand steady while attempting to paint a flag on some wiggling child’s face.

My current neighborhood doesn’t have a parade or party, but we still have some enthusiastic celebrators. Last year, my sister and I lounged on the front stoop to cheer on neighborhood children who ran down the street with sparklers, A few years prior, we sat in a neighborhood park, staring up at a fireworks show until the automatic sprinklers popped on, sending everyone scurrying.

In my experience, the Fourth of July is a great excuse to get to know your neighbors. Instead of doing the typical wave-and-hi-and-bye (of which I’m notoriously guilty of), take a few minutes to chat with your neighbors about their holiday plans and offer them a slice of homemade watermelon-shaped cheesecake.

Several childhood Fourth of Julys ended in the family canoe, gazing up at a shower of sparks that soared above one of Wisconsin’s many lakes. I no longer have a canoe, but I still enjoy getting outside on the holiday. There was the Independence Day where my sister and I took turns lazing in an inner tube at a lake reading books. A few years later, we spent the holiday hiking a new trail that led us to a fire lookout tower. And, of course, there was the time that we put our cats on leashes and sat in our front yard, simply soaking up the sun.

Whether it’s an outdoor picnic or a backcountry adventure, the Fourth of July is the perfect excuse to spend some time outdoors. Invite your neighbors on a leisurely bike ride to a nearby ice cream shop. Turn off electronics and instead check out a park you’ve never been to before. Create a Fourth-of-July-themed playlist and go for a scenic drive, windows down and volume up.

While I still love long-held holiday traditions, I’ve found that I enjoy the little bit of mystery that surrounds Fourth of July. There’s something fun about not having the exact details of the meal or location or day’s activities. I’m not sure what the upcoming festivities will look like. However, I’m fairly certain it won’t involve JELL-O cheesecake.