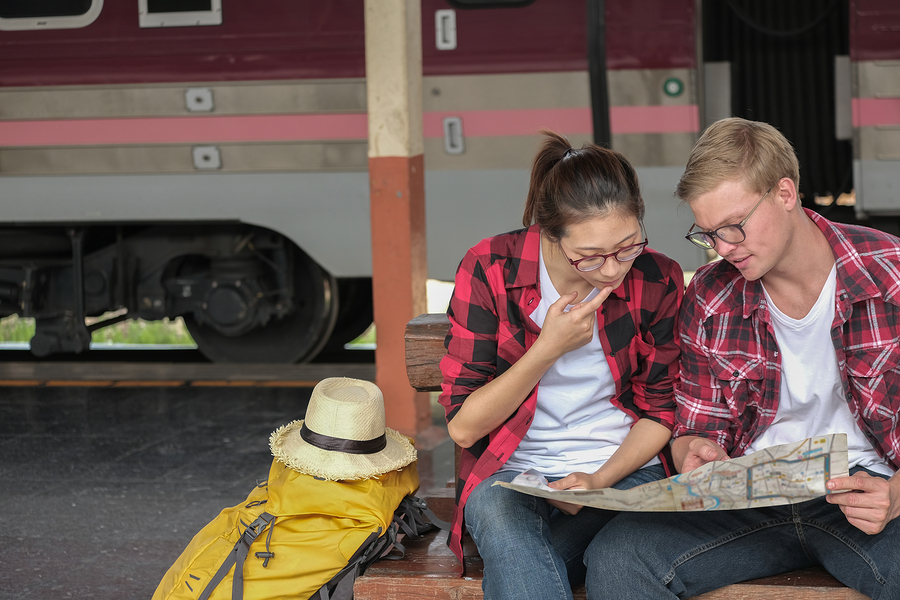 The elevator doors opened, and my boyfriend, Adam, and I were greeted by fireworks and a team of Japanese men waving enthusiastically. One of the men took my arm and pulled me over to the bar, where he massaged my hands with a warm towel. I glanced at Adam, seated next to me, with a look that said, “What have we done?”

On a normal night, this bizarre situation would’ve had us laughing our heads off. But we were tired. And hungry. And grumpy. It was past midnight, and we’d spent the entire day traveling from our home in South Korea to Fukuoka, Japan, getting lost, and arguing over where to eat.

We’d circled the same block three times when I was about ready to take a nap on the sidewalk. Desperate, I pointed to the first sign I saw with food on it.

And this is how my first big fight with my boyfriend took place in a Japanese darts bar.

I don’t think we even knew what we were fighting about. We were exhausted, starving, and exchanging, “What’s your problem?” and, “Nothing, what’s your problem?” Soon, we were arguing about arguing from behind a menu. Tears were swelling up in my eyes, and then — more fireworks. Out comes a waiter with a beautiful roll cake that, in hand-calligraphed chocolate icing, read, “Welcome to Japan!”

After angrily polishing off a basket of fries, we walked back to our hotel, where we slept with our backs to each other.

You could say our first day of our first trip together wasn’t Instagram-worthy. But I wouldn’t trade that trainwreck for the world, because it unveiled our worst (and best) selves, it taught us how to fight fair, and we grew closer as a couple from it. And by the second day of our trip, we were teammates, exploring temples and shrines, asking strangers to take our picture, and offering to carry each other’s bags. In fact, after exploring new places together, Adam isn’t just my No. 1 navigator or my favorite travel pillow — he’s my best friend.

Unconvinced? Take a closer look at why I think traveling with an S.O. is essential, especially before getting serious.

1. It unveils who you and your partner are at your worst (and best).

Even if you plan on traveling to the serene Bahamas, you’re probably going to be tired, hungry, and exhausted by the time you get there. How your partner reacts to the stress that comes with travel will say a lot about their character and how they might react to other stressors in the future, like work, dealing with an illness, or even raising a child.

How your S.O. reacts to you when you’re at your worst is also something to pay attention to. For example, my boyfriend knows that I can get snappy when I’m hungry. Instead of being snappy back, he’s quick to de-escalate the situation (and help me find me food!). But don’t expect your S.O. to read your mind. Whether you’re in need of extra space, extra affection, or extra snacks, be transparent and speak up.

2. It teaches you both how to fight fair.

Traveling shouldn’t be synonymous with arguing with your S.O. If it is, there might be a bigger problem. But after exploring a new city all day in the sun, you’re more likely to lash out. And your first argument on a trip with your partner probably won’t be pretty. What’s important, though, is that you both learn to fight fair, meaning no shouting, name-calling, or low blows.

And if you have the tendency to say hurtful things in the heat of the moment, you might want to practice what you learned as a child: count to 10. I’m a count-to-10 enthusiast. Adam has the tendency to walk quickly, and I basically have the legs of a corgi. Sometimes when we’re weaving through airports or subway stations and I lose him because he’s too far ahead, anger bubbles up inside of me. After I catch up, I want to shout, “Why do you do this!” Instead, I count to 10, and I let my feelings subside.

If you and your partner practice fighting fair under the stress of being elbowed in bustling subway stations and sitting next to crying babies on airplanes, you’ll find that healthy arguments can lead to growth and quarrels at home will be easier to work through in a kind way.

3. It helps you grow closer as a couple.

One of the top 10 reasons for breaking up is “relational divergence” or growing apart. While it’s healthy to have your own friends and hobbies, traveling together builds memories and creates new shared interests, like an affinity for a new language or an exotic food worth recreating together in your kitchen at home. Adam especially loved goboten udon, or burdock root udon, in Fukuoka. We haven’t found our perfect recipe to recreate the dish yet, but we’ve had fun experimenting with different veganized udon recipes.

In addition to building new memories, you and your S.O. will have to put your relationship to the test by working together to decode directions, languages, and even strange foods. It’s sort of like being stuck in an escape room, except the puzzles and clues are new places, experiences, and languages.

But, you don’t have to travel across the world to reap the benefits of traveling with your S.O. In fact, a trip across state lines or even to a new city can have the same effect. Some of my favorite memories with Adam were made exploring Baltimore, where he grew up. Like our Japan trip, there were negatives, like accidentally booking an Airbnb with a concave bed and boarded-up windows, and positives, like meeting his too-cute niece and discovering the best veggie sushi I’ve ever had at Fells Point.

Sure,  the first day of my first trip with my S.O. was a disaster but if we hadn’t had turmoil in the beginning, we wouldn’t have learned valuable lessons. The rest of our trip in Fukuoka wasn’t picture perfect, but our travels — and our relationship — has only gotten better since.

Whether your trip goes swimmingly or sinks isn’t the point. Traveling is a shortcut for unearthing the best and the worst in a person. It breaks your relationship open when you’re tired and hungry during a hand massage you didn’t ask for in a weird darts bar. And traveling puts the relationship back together, stronger, when you wake up in the hotel room and realize your S.O. snores like Totoro and you love him anyway. Soon, we’ll be moving back to the U.S., and we won’t have the luxury of travelling in Asia cheaply. But on the way home, we’ll be stopping in Quebec, Canada, and Salt Lake City. There may not be any more Japanese darts bars, but I’m sure there will be more maps, food, and relationship lessons to learn in our near future.