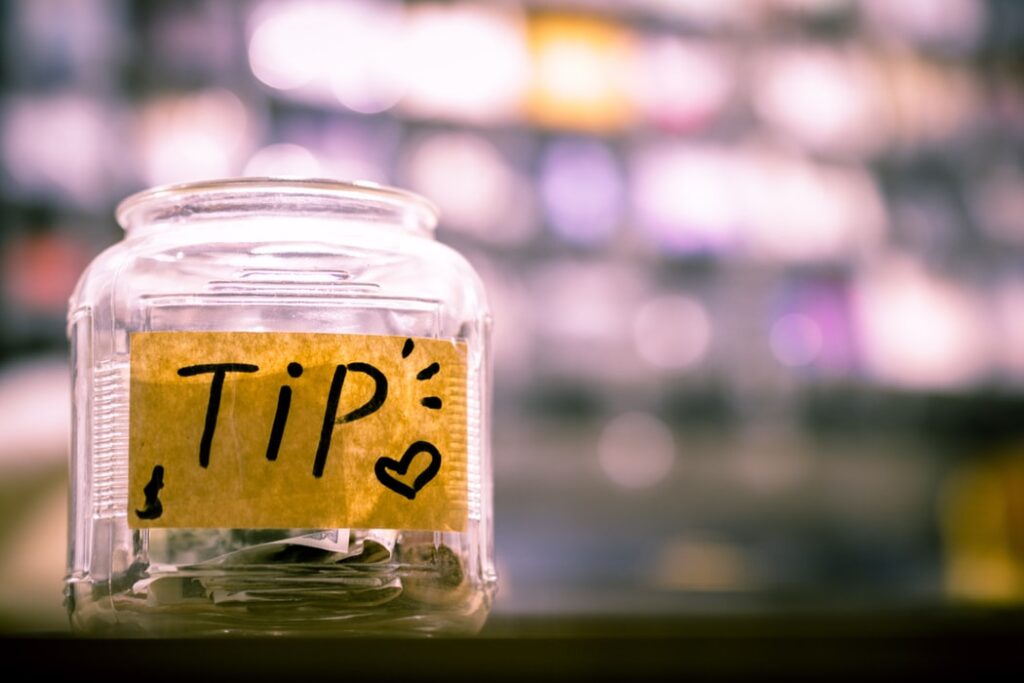 When my husband first moved to the United States from Australia, he was utterly confused by tipping culture. He didn’t quite understand who to tip or under what circumstances. Once, he tipped the garbage man, which, while no doubt appreciated, definitely isn’t standard. In restaurants or hair salons he was so afraid of getting it wrong that he often overtipped. I’m sure the staff loved it, but our bank account did not.

RELATED: Why It’s So Hard for Me to Talk to My Fiancé About Money

Now, after seven years as an American, my husband can hold his own when it comes to tipping. He knows standard tipping practices and tries to teach his family when they visit, always emphasizing the fact that tipping is important: People in service industries rely on tips to survive.

Years of answering questions about tipping forced me to think a lot about the practice, which many people outside the service industry don’t give much thought to. For example, why do we tip the bellhop, but not the trash collector? Are you actually supposed to tip the salon owner? And what constitutes a “good” tip?

To find out, I reached out to people working in the service industries, to tap into their knowledge on Tipping 101.

This is where people tip the most often, and where tipping is, arguably, the most important. Waitstaff are paid super low hourly rates — as little as $2 an hour — so they rely on tips to make a livable wage.

“We literally work for free after taxes if we don’t receive a tip,” said Chelsie Kmon, a waitress in Massachusetts. It’s not just taxes — wait staff also need to “tip out” busboys, bartenders and hostesses. So, when you leave a tip with your check, you’re not covering just the waitress, but all of the restaurant staff. And, if you tip too little, the waitress or waiter suffers, since they still need to tip the staff.

Remember that some bad dining experiences — like food that takes a long time to come out — are often not your server’s fault, says Rachel Zients Schinderman, a former waitress in Los Angeles. Unless the experience is bad enough that you need to talk to a manager, always leave a tip, she says.

Here’s where it starts getting tricky. If you’re not getting table service, should you still leave a tip? At cafes, some fast-food restaurants, food trucks and other establishments, tips are still appreciated, although workers at these establishments are usually being paid more per hour, so they rely less on tips. Still, tips are important, workers say.

“If there is an option to tip (a line on the receipt, or even a physical tip jar), do it,” says Jessica Lemons, whose husband works at a cafe in Bryan, Texas. Lemons always tips at least 20 percent, while other people leave less for casual service. Still, even small tips can add up and make a difference for your servers. The extra $1 might not mean much to you, but $1 from every person who comes through a cafe can add up quickly for the staff.

I have to admit, I’m guilty of forgetting to tip housekeepers at hotels. Or, intending to tip, but realizing that I don’t have any cash. That’s really not acceptable, according to Stephanie Land, a former housekeeper who wrote a bestselling book called “Maid” about her experience.

Land says that it’s a good idea to tip housekeepers $10 every time they clean, either at your home or at a hotel. Remember to leave it daily, since your staff one day might not be the same as the staff on the day you depart.

“When I’m staying at a hotel, I usually leave $10 per day, per adult person who stayed, and leave it daily — not just at the end — if I am able to,” Land said.

Restaurant tipping is easy for me: I leave at least 20 percent, and a bit more if the service was great. I have that down pat, but I still get confused about tipping in salons or spas.

Twenty to 30 percent is the standard tip range for most services, according to Holly Wilson, a massage therapist who works at a spa north of Chicago.

In some rarer instances, if you’re booking a regular service with the owner of a business (not an employee who is renting space in the salon), you’re not expected to tip, according to Dawn Zombeck, a massage therapist in New Hampshire. That’s because business owners are setting their own livable rates, unlike waitstaff or spa employees, who only get a portion of the cost of service.

However, if your experience is extra great you can throw in a small tip.

“I don’t expect tips when I’m doing makeup, but I always love getting them,” said Renee Rucker, who runs her own business as a make-up artist in Massachusetts.

It’s standard protocol to tip taxi drivers, but Uber and other ride-sharing platforms have made the process more complicated. Cynthia Ward, a rideshare driver in New Hampshire, said that only about 40 percent of her customers tip, despite the fact that she has a high rating on the app. And yet, tipping can make a big difference to her income.

The Uber app prompts customers to tip $1, $3 or $5, and cash tips are always appreciated, Ward said. Just remember to tip your driver right away so you don’t forget!

“Many people will say ‘I’ll tip on the app’ as they leave, but they don’t,” Ward said. “That’s frustrating.”

There are plenty of other situations where tips are appreciated. Any time a service provider goes above and beyond what you were expecting, tipping can be a great way to show your appreciation.