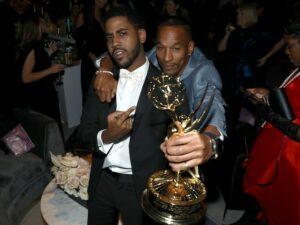 To quote Ron Swanson, “Awards would be less stupid if they went to the right people.” This year, the Emmy Awards nailed it with Jharrell Jerome’s historic win. Jerome became the very first Afro-Latino and Dominican to win an acting award in the Emmy’s history. He was awarded best lead actor for his role as Korey Wise in the Netflix show “When They See Us.” At 21, Jerome is also the youngest person to ever win in this category. He dedicated the award to Exonerated Five, the men the series is about. He later told reporters, “I hope this is a step forward for Dominicans, for Latinos, for Afro-Latinos. It’s about time we’re here.” We agree, and congrats on making history, Jharrell! Read more.

Last week, a tropical storm produced torrential rain that flooded Beaumont Texas, leaving many people stranded on the roads and in their homes. Satchel Smith was meant to work the front desk at the Homewood Suites Hotel from 3:00PM to 11:00PM that day, but in the midst of the storm, none of Smith’s fellow employees were able to come to work. The only employee in the entire hotel, Smith worked tirelessly to provide for his guests. He manned the phones, worked maintenance, answered all their questions, and with the help of a guest, cooked breakfast and dinner. The guests bonded together quickly and even braved the outdoors to hand out water to truck drivers who were stuck on the road. Read more. 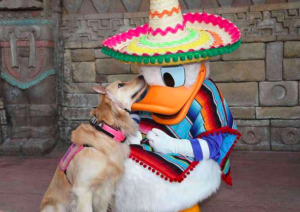 Megan Leigh and her service dog, Nala are an inseparable pair. One of their favorite things to do together is to go to Disney World, and Megan definitely isn’t the only one who has fun. Nala’s favorite part is when she gets to meet some of the famous Disney characters, and on this particular day, Nala gave some extra love to one character in particular. Video footage shows Nala resting her head in Donald Duck’s lap, and refusing to move. Now that’s something to smile at! Read more.

Can you believe it was just a year ago when Gritty, The Flyers’ mascot, debuted and took the internet by storm? Well, this week was his first birthday, and he was ready to celebrate. Before his big day, he tweeted that his birthday would be called “National Gritty Day,” and that he expected a ton of gifts. He also included a very long list of everything he wanted. Gritty even threw himself a surprise party: He decorated his office the way he wanted, left the room, and walked back in pretending to be shocked. We’d like to formally request an invite to next year’s birthday bash: @ us, Gritty! Read more.

The Power of Performance: Fairytale Physical Therapy Brings Joy to Kids on the Mend 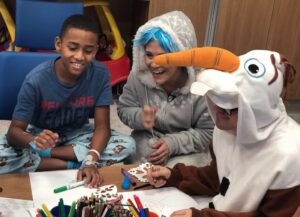 Being in the hospital is no fun for kids, but Fairytale Physical Therapy’s volunteer physical therapists, actors, and students hope to bring a little magic to those on the mend. Fairytale Physical therapy seeks to creatively engage kids through choreography based on therapeutic movements. In one of their recent performances at a children’s hospital, they performed a rendition of “The Snow Queen,” dressed as characters from “Frozen,” and incorporated musical numbers from the Disney movie. After the performance, it’s the children’s turn to learn the dances and continue practicing for their next big — and healing — number. Read more.