This week, Hurricane Dorian devastated the Bahamas, but one woman in the Bahamian capital of Nassau made sure that the island’s four-legged friends would be safe. Chella Phillips now has 97 dogs living in her home, with 79 of them staying in her bedroom. Phillips is the founder of Voiceless Dogs of Nassau, Bahamas, a shelter that lost power during the massive storm. She takes care of more than 200 dogs a year, mostly by herself, and then sends them on to forever homes in the U.S.. When the Bahamas begins to recover and air travel is up and running again, Phillips will work on finding the right homes for her housemates. Read more,

Turning the Page to a New School Year

Principle Glen Cook of Pleasant Ridge Elementary in Gastonia, North Carolina wanted every one of his students to have an extra special birthday this year. He hoped that every one of the 900 kids at his school could be gifted a book on their birthday, so he reached out on Facebook to see if anyone had donations. While Cook was expecting about 40 or 50 books at best, he soon received 500. Kathryn Thomas, a kindergarten teacher at Pleasant Ridge, was particularly touched by the gesture, saying “My parents were very poor, we didn’t have books in our home. To have a book that is theirs that the principal gave them will mean the world to them.” Read more.

Cancer is a ‘Sucker,’ But the Jo Bros Just Made One Patient’s Day 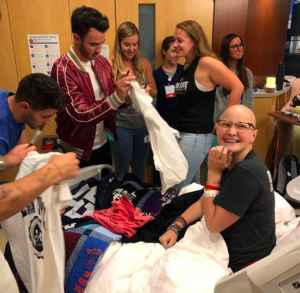 Lily Jordan, a 16-year-old cancer patient, was disappointed when chemotherapy got in the way of her attending the newly reunited Jonas Brothers’ concert in Hershey, Pennsylvania. So, she reached out to the band via Instagram, writing that if they wanted to, they could “pop in” to her hospital room. That’s when the magic of social media took place, and her post went viral, eventually reaching the Jo Bros themselves! The next day, Kevin, Joe, and Nick (along with Nick’s wife, Priyanka Chopra Jonas)  visited Lily, talked, and took photos. The trio asked Lily what song they could dedicate to her at the concert, and she chose “S.O.S.” Read more.

It was a devastating loss for 15-year-old tennis sensation Coco Gauff, who couldn’t hold back her tears after being defeated by Naomi Osaka in the U.S. Open. But Osaka, herself a young superstar, knew exactly what she was going through and offered Gauff comfort and words of wisdom. She reassured her that it was better to cry in front of thousands of spectators rather than alone in the locker room, and she even invited her opponent to the on-court interview, which is traditionally reserved for the winner of the match. During the interview, Osaka began tearing up too, and told Gauff and Gauff’s parents that they are amazing. For Gauff, this is a moment she’ll never forget, and she said in a news conference that Osaka’s actions were that of a “true athlete.” Read more. 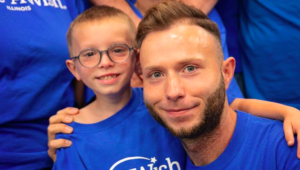 Going to Disney World was a dream trip for 7-year-old Make-A-Wish recipient, Gabriel Smith. However, his request didn’t just involve meeting Mickey Mouse, it also involved bringing the bone marrow donor who saved his life along with him. But when Gabriel was told he couldn’t do both, he decided that meeting his donor would be more fun. The donor, who lives in Germany, was more than happy to make the international trip to Gabriel’s hometown in Illinois. Their meeting not only sparked a bond that will last a lifetime, but also brought awareness for a good cause. Read more.