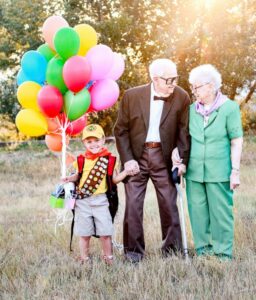 Thought you were done crying from Pixar’s “Up?” Well grab some more tissues. For 5-year-old Elijah Perman, ”Up” is a way of life. His favorite pastimes include drawing pictures of the characters, watching the movie on repeat, and telling his mom and dad all about it. So when the time came for his fifth birthday, his mom, who’s a photographer, had the perfect idea. They staged an “Up”-themed photoshoot, using Elijah’s great grandparents to play the parts of Carl and Ellie. And even though his great grandparents had never seen the movie, they were happy to help! The results are the cutest photos, starring the happiest little boy. Read more,

You might think that a breast cancer diagnosis would slow a person down, especially given that the doctors told Sarah Thomas she might never be back to her great physical shape. However, only a year later, she has broken a world record. She became the first person to swim across the English Channel four times nonstop, a total of 130 miles. Sarah loves to swim, and continued practicing her sport while undergoing chemotherapy. She even got back in the water a week after finishing radiation. Now that she is out of treatment, she is pushing herself like never before. She celebrated her record with champagne and M&Ms– we can’t think of a better post-world-recording-breaking meal! Read more. 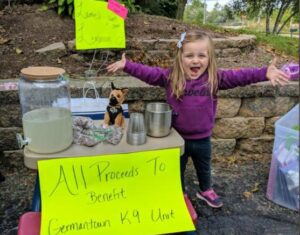 Three-year-old Lainie is an outgoing and active little girl. So, to keep her busy during her family’s yard sale, her mom, Molly Stephens, let her daughter run a lemonade stand. Looking to teach her daughter about giving back, Molly decided the couple bucks her daughter would make would be donated to their community funded police dog force. However, the simple lemonade stand evolved into something more than Lainie or her mom could have ever imagined. After word of Lainie’s lemonade stand was posted to Facebook by a local police officer, people from all over the community came to buy a glass. After her three-day lemonade stand fundraiser, Lainie raised more than $700 for her local police dog force!  Read more.

Kit Kats in Japan to Replace Plastic With Origami Paper

Japan is making a big, very eco-friendly change: Using origami paper instead of plastic wrapping for Kit Kat bars. The candy’s creative new packaging will even feature instructions for  making an origami crane. This change will not only be a fun one for candy-lovers, but will help the environment as well. Making the switch will cut down on the country’s plastic use by 380 tons per year. The most popular flavors will launch later this month in mini sizes (original, matcha, and dark chocolate), and by 2021, all regular Kit Kats will use paper packaging as well. It’s nice to see large companies starting to make a change and caring about the environment. Read more.

Crane Operator Makes Friends With His Only Audience Member

Shawn Beveridge is a crane operator, and was recently assigned to a job across the street from a nursing home. Over the course of his work days, he noticed an elderly man in a wheelchair arrived every morning at 7 a.m. sharp to watch him work. Shawn became curious and introduced himself to the man, whose name is Harold, and found out that he lived in the nursing home. Harold shared that he used to be a crane operator, and he enjoyed watching Shawn do the work he used to love. So, Shawn made a pact with Harold: In exchange for Harold’s crane operation advice, Shawn would bring Harold coffee in the mornings and buy him lunch twice a week. Needless to say, Shawn was happy to do this, saying, “When God chooses to take this man home, I’m happy knowing that I’ve been placed here at this location to make his days better. I’m happy with that.” Read more.