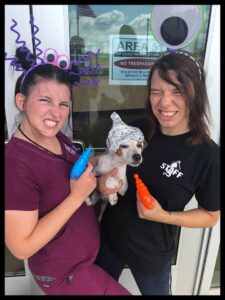 You may have heard of the latest craze calling for people to storm the restricted U.S. Air Force base Area 51 in September (if you hadn’t heard– don’t worry for the youth, it’s just a joke). Well, the Longview Animal Care and Adoption Center in Texas is capitalizing on the social media trend to promote “alien” adoption! In an effort to find forever homes for their shelter animals, the center is dressing up animals in extraterrestrial fashion that’s truly out-of-this-world. LACAC is attracting viral attention for their adorable “alien” pets, complete with clever slogans: “Our aliens can go home with your for the best price in the galaxy. ET can phone home right here from 11-5 Tuesday-Saturday.” This shelter has already received more than 30,000 shares on Facebook and 8,000 likes on Twitter. Adoption rates have skyrocketed since beginning the campaign and we only hope the numbers keep rising. Read more.

Native Woman Becomes Medical and Spiritual Leader in Her Tribe

Dr. Mary DesRosier became the first Native American woman in her Blackfeet tribe to earn a doctorate in medicine. As a graduate of the University of North Dakota School of Medicine, she was later honored by her tribe at her homecoming with the title “Medicine Victory Woman.” She now works as a doctor for Indian Health Services on the Blackfeet Reservation and also leads a Eucharistic study group at the Little Flower Parish. As a woman of faith and medicine, she finds her calling in serving and healing her patients who struggle with depression, opioid addiction, and various forms of substance abuse. The community sees DesRosier as a medical and spiritual leader as she continues to heal her people in both body and spirit. Read more.

To what lengths would you go for a party? For Kerry Maggard, 400 miles is what separated her from making it to her aunt’s 100th birthday party. Maggard and her sister, Deb Eggers, had missed their connecting flight and couldn’t find any available rental cars, so they took their chances on an Uber for the four hour trek. To their surprise, a driver named Jesus responded and picked them up. After they arrived safely, Kerry tweeted about the generous Uber driver who was the savior of the day, saying, “My sister and I requested Uber for a 4 HOUR drive and LOOK WHO ANSWERED OUR PLEA!!! #JesusSaves #Godhasasenseofhumor.” Now we really know what it means when we ask Jesus to take the wheel! Read more.

Men Take Homeless Man Out to the Ballgame 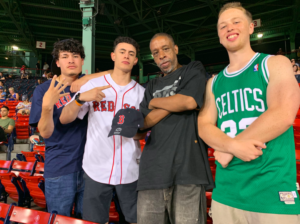 Proving that baseball is more than just a pastime, three young men showed the rest of America how special this sport can be when they invited a homeless man to see a game with them. Pedro Lugo, Francisco Rios, and Sean Wetzonis were left with an extra ticket to see the Boston Red Sox play against the Toronto Blue Jays at Fenway Park when their friend dropped out. Not wanting to waste the ticket, Lugo looked for a special someone who would “appreciate the ticket and have the time of their lives.” They met a homeless man named John nearby, and offered him the chance to see his first-ever live ballgame. Although the Red Sox lost, it was still a special night for these four who all came away as winners. Read more.

Blazing a Trail for Wheelchair Users

There is nothing like exploring the great outdoors, but for people with physical disabilities, trails aren’t usually accessible. That’s why the Friends of Sleeping Bear Dunes in Michigan invented the “track chair.” The track chair has treads which allow people in wheelchairs to traverse the wilderness see the sights that nature has to offer. The chair is completely free, although people who would like to use it must reserve it a few days in advance. The invention is a great way for everyone to have a chance to hit the trails, and we hope that other US National Parks start to offer the track chair too! Read more.