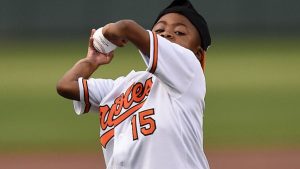 9-year-old Zion Harvey threw out the first pitch at the most recent Orioles game against the Texas Rangers – and he did so as the first child to ever undergo a double hand transplant. Thanks to occupational therapy and the trained staff at the Children’s Hospital of Philadelphia, Harvey is adjusting to his new hands wonderfully. The pitch looked great, too! Read more.

The 86-year-old “Iron Nun,” Sister Madonna Buder, was the only person competing in the Iron Man triathlon in the 85+ age category. What’s more, this was her 46th race. However, her experience couldn’t prevent her from making a mistake: she forgot sneakers the day of the race! Luckily, she met a volunteer who loaned the nun her own shoes for the day. They fit perfectly – and Buder finished the triathlon! Read more.

Rachid Nekkad, a wealthy French entrepreneur, has taken it upon himself to pay the fines of women who are sanctioned for wearing a “burkini” at French beaches. His aim is to alleviate some the stress these women face for being policed about their dress. Nekkad asked the mayors of all 26 cities who enacted the burkini ban to bill him directly for all fines. Read more.

For his 9th birthday, Carson Boutte of Lafayette, LA passed up a traditional cake and party to deliver pizza to the survivors of the Baton Rouge flood. He, along with friends and family, hand delivered over 300 pizzas to people and relief workers who have been affected by the natural disaster. What a great gift to give others on your own birthday! Here’s a link to a list of charities helping flood victims and items you can donate if you live nearby. Read more.

Orlando Health and Florida Hospital will forgive an estimated 5.5 million dollars in out-of-pocket medical expenses for survivors of the Pulse Nightclub shooting. The hospital treated 44 people affected by the shooting who were in need of immediate care. The hospital will also not charge the families of the nine patients who did not survive that evening. CEO David Strong says that he was simply paying the kindness shown to him by the Orlando community forward. Read more.