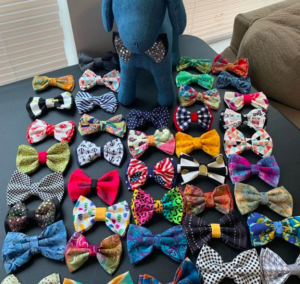 Twelve-year-old Darius Brown is the founder of Beaux and Paws, a pet couture company that donates fashionable handmade bow ties to animal shelters. Determined to fight the euthanization of unadopted animals, Brown hopes that rescue dogs and cats can attract more attention for adoption with the help of stylish accessories. His love of creating bow ties began at the age of 8 when he was helping his sister Dazhai, a hair and makeup artist, make some. Brown has already won several awards for his mission, including a letter of recognition from former president Barack Obama. Read more.

Gritty, the googly-eyed mascot for the Philadelphia Flyers, paid a very special visit to one of his young fans. Philadelphia native Caiden O’Rourke, a double amputee born with a rare bone condition, was getting fitted for new prosthetics and asked that his new leg be orange with Gritty stickers. When the Flyer’s mascot heard about Caiden’s request, his hero paid him a special visit in the hospital, bearing gifts that included a personalized custom jersey. Read more.

Last Wednesday, Joy Harjo became the first Native American to be appointed as Poet Laureate of the United States. Harjo has been writing since 1973 and often ties Native American themes into her work. She uses poetry as a way of healing and bridging divided communities, acknowledging how her culture has helped shape these experiences. As an award-winning writer and musician, Harjo is a multidisciplinary artist who spreads a message of unity and connection. Read more.

13-Year-Old’s Desserts Are Baking a Difference 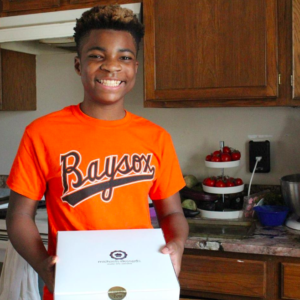 Thirteen-year-old Michael Platt is baking his way to everyone’s hearts with his business Michael’s Desserts. This talented young entrepreneur is using his skills with sweets to help those in need. For each cupcake sold, Platt donates one to the homeless. He founded this business with the dream of bringing hope to others and draws culinary inspiration from freedom fighters he admires. Platt’s even partnered with No Kid Hungry, which works to end child hunger in America. Read more.

Restaurants in Sacramento are joining the I Got Your Back campaign, a program that pledges to erase mental health stigma in the workplace. Patrick Mulvaney, founder of the campaign, knew how common mental health issues were in the food industry and wanted to bring the conversation to the forefront following the death of celebrity chef Anthony Bourdain. New strategies, such as having trained mental health staff on-site and daily mood cards that staff can anonymously fill out, are helping employees express their feelings and feel supported. Mulvaney hopes that these new changes will allow restaurant staff to relieve stress and come together in a supportive environment. Read more.