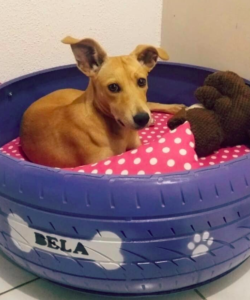 Finally, your pet can have the eco-friendly snoozles they deserve. Amarildo Silva, a 23-year-old Brazilian artist, is doing his part to help decrease waste. After observing stray dogs making a home in old tires littered along the street, Silva realized he could repurpose this “trash” into eco-friendly dog beds. With help from family and friends, he began collecting old tires and moving them to his backyard. Along with decorating the tires to make them bright and beautiful, Silva adds a mattress and pillow for maximum comfort. The bed can also be customized with a pet’s name. How successful is the venture? According to Silva, he’s been able to remove 1,500 tires from the streets by filling orders. Read more.

Rawlin Tate Jr. just made history at his high school in Stockbridge, Georgia. With an impressive 4.7 GPA, he became the first African American male to graduate as a valedictorian. His talents aren’t just in the academic field; he also plays piano and percussion, and competed on both the varsity tennis and football teams. In total, Tate Jr. was offered more than one million dollars in scholarship offers. This fall, he will be studying mechanical engineering at North Carolina A&T State University. Read more.

Like many teens, Ugo and Emma Angeletti are quite concerned about the current state of the environment. After finding out that the majority of the trash produced by people is food waste, Ugo, 19, and Emma, 18 became determined to help cut that down. They started a charity called back2earth in their home state of Florida. The charity, which runs mostly based on the help of the youth community, offers a composting service for local Miami residents: They can fill up a bin and have it picked up by volunteers or drop it off to a center themselves. Then, back2earth does the actual composting. The charity also presents at schools to educate kids on composting and the environment. The children really are the future! Read more.

A Prom for a Different Kind of Senior 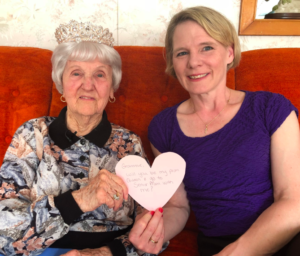 Helen Danis, a 97-year-old woman who lived through the Great Depression, is determined to check out all the things she missed as a child. In December, she sat on Santa’s lap for the first time. This summer, she’ll be going to the prom she never got to attend in high school, as she’s says she didn’t really fit in. “We were in the middle of a depression and money was scarce.” Danis’s granddaughter asked her grandmother to Rhode Island’s Pilgrim High School Prom, complete with an over-the-top “promposal.” A trolley will pick them up for the event, with Danis wearing comfortable shoes to make sure she can dance! Read more.

“America’s Got Talent” Singer Brings Down the House

Kodi Lee wowed the judges and the crowd this week on “America’s Got Talent” with a beautiful cover of “A Song for You” by Dorothy Hathaway. The 22-year-old, who is blind and has autism, was accompanied by his mother, who told the audience before he performed that making music has “actually saved his life.” She then gave him a brief pep-talk before Lee  played both the piano and sang. Lee’s incredible performance landed him the first “golden buzzer” of the season, meaning he will advance straight to the finals. Read more.