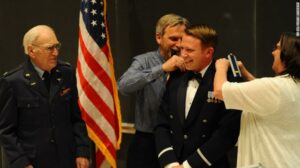 A World War II veteran traveled 1,500 miles from Amherst, New York, to Colorado Springs, Colorado, to pass the baton to his grandson. Walter Kloc, who is 101 years old and was a bombardier and pilot for the Army Air Forces, attended his grandson Joseph’s graduation from the Air Force Academy and commissioned Joseph into the Air Force as an officer. The proud grandfather received a standing ovation as he personally passed his legacy on to his grandson. Read more.

Dayton Consolidated School in Dayton, Maine, told the parents of Morey Belanger, who has severe hearing loss, that the school was excited and willing to provide all the help they could. The staff really kept their word. Six-year-old Morey has a genetic condition that causes hearing loss. Despite the school never having a deaf student attend before, they’ve been going above and beyond to help adapt their school. Morey’s classmates are learning sign language and sign language posters have been put up around the school. The school even threw a party to celebrate Morey, with Cinderella on the invite list. Cinderella serenaded the students — in sign language! Read more. 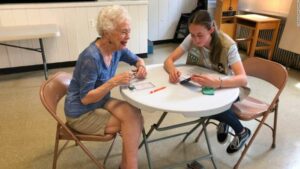 Girl Scout Troop 60013 of Arlington, Virginia, upped their volunteering game recently by opening a walk-in clinic…for seniors with smartphones. The “Techbridge” clinic hosted by the scouts helped senior citizens in their area learn how to use modern technology. The girls helped in a variety of areas, from teaching the seniors how to back up their data to showing them how to text their children and grandchildren. Nancy Taylor, a grandmother of four who learned to text from the scouts, had nothing but praise for the girls: “Those girls were just marvelous. They were all set up and ready for us and had a very mature attitude about answering our questions, and they were magnificent.” Read more.

An adorable father-son conversation proves communication is about much more than just words. Hearts are melting all over the internet thanks to a video of a full conversation between a father and his baby. Yes, that’s right, a baby. The two share some scintillating analysis of the TV show they’re watching, with the dad fully participating while his son adorably babbles away. Great parenting from this viral dad makes enjoyable entertainment for the rest of us! Read more.

Seven-year-old Grayson’s texts to his father have been warming hearts all over the internet. Grayson, who has autism and ADHD, just learned how to use buttons and zippers thanks to occupational therapy. Proud of his accomplishment, he decided to take a handsome selfie of his outfit and send it to his father, saying, “I got dressed all by my self [sic].” His dad responded, “You did a great job buddy,” to which Grayson texted back, “Thanks bud.” Grayson’s mom shared a screenshot of this adorable exchange on social media, and now the 7-year-old is a Twitter celebrity, which he thinks is “great.” Read more.