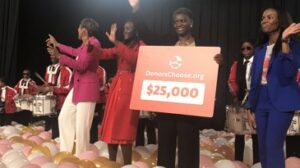 Actress Lupita Nyong’o paid a surprise visit to Coretta Scott King Young Women’s Leadership Academy, an all-female STEM school in Atlanta, Georgia that is made up entirely of girls of color. The “Black Panther” star told the students that their “superpower is learning” and made the crowd go wild when she saluted the students with the famous “Wakanda Forever” gesture. Nyong’o also gave them a $25,000 check from DonorsChoose.org. The middle and high school provides students with the opportunity to cultivate their science, technology, engineering, and math skills, and in the future, these girls will help create more gender and racial diversity in these fields. Read more.

Since the tragic fire that destroyed the roof of Notre Dame Cathedral in Paris, the French government has been searching for the perfect design for a new roof, and one of the top candidates is energy-efficient. Vincent Callebaut Architectures have come up with a roof design composed of glass panels that would store solar energy and have the ability to power other buildings in the area. The roof would also be home to a fruit and vegetable garden, which could help feed homeless and hungry Parisians. The design has yet to be accepted, but it would certainly transform Notre Dame into one energy-positive cathedral! Read more.

Mail Carriers Across the Country Pick up Food Donations

On the Saturday before Mother’s Day and again on May 13th, mail carriers from across the country participated in the Stamp Out Hunger Food Drive, going door-to-door picking up food donations from those along their routes. What began 40 years ago in Glendale, Arizona is now the largest one-day food drive in the entire world. St. Mary’s Food Bank, where the drive originated, collected 200 to 400 pounds of food last year alone and are expecting more this year. Read more.

College Grads Prove That Age is Just a Number 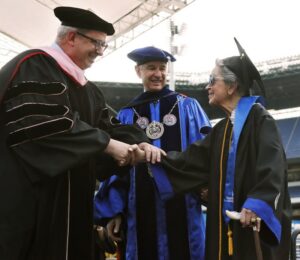 These two college grads prove that it’s never too late to get your degree. Joyce Lowenstein, who is 93 years old, received her Bachelor’s degree in art history from Georgia State University, and 99-year-old Elizabeth Barker Johnson walked across the stage to receive her diploma from Winston-Salem State University after she was unable to attend her graduation ceremony 70 years ago. Lowenstein decided to finish up her college degree that she started back in 1943. Her professors and classmates are in awe of the great-grandmother, who graduated with honors and over a 4.0 GPA. Johnson is a WWII veteran who served overseas in an all-female, all-African American regiment, was the first woman to enter college on the G.I. Bill. She was unable to accept her diploma in person because she began working as a teacher. She finally got to wear her cap and gown as she accepted her honorary degree in special education. Congrats to these grads! Read more here and here.

In an act of civil disobedience, Cardinal Konrad Krajewski climbed down a manhole in Rome and turned on the electricity in an unused state-owned building where 450 people, children included, were living without lights or hot water for a week. He broke the police seal, restored the power, and left a note. Utility workers went to cut the power off again, but after discovering his note, had a change of heart and kept it on. Cardinal Krajewski, who does charity work in the name of the pope, had just come back from Greece, where he provided refugees with financial donations and let them know they are not forgotten. Read more.