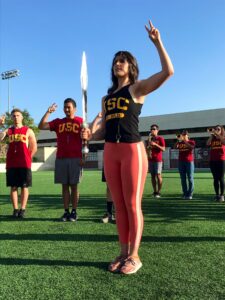 It’s about time! University of Southern California Rising junior India Anderson will become the school’s first female drum major this fall. It’s a big role at USC, as the drum major leads a traditional pre-game ritual that involves weilding a sword ahead of the band’s entrance. She was elected by her bandmates after an intense audition process. Anderson is thrilled to have this opportunity, saying “I think it’s really just a great statement showing the fact that now the position really is equal. A man or a woman can do it.” Read more.

The nonprofit Archangel Ancient Tree Archive is trying to fight climate change one extremely large tree at a time. Their team has taken sprouts from chopped down redwoods that contain the “exact genetic fingerprint” of the tree and are attempting to breed them so they can send saplings all over the world. The Redwood is one of the fastest growing species of any tree, and with an average weight of 1,000 tons, they are capable of pulling a lot of carbon from our very polluted atmosphere. Read more.

Last week, the little drone that could made history. Scientists at the University of Maryland successfully delivered a kidney to a patient in Baltimore – via drone. It was the first time an organ has been transported by an unmanned vehicle. Beyond simply being an incredible technological feat, this trip’s success means that more medical drone trips could be in store in the future. Drones offer faster, safer, cheaper, and more readily available transport than other traditional methods. Read more. 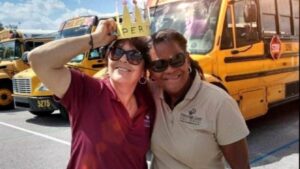 Every year, “Good Morning, America” honors one special mom with breakfast in bed from chef Emeril Lagasse. The lucky winner this year was Terrie Campbell of Plant City, Florida, who’s a single mom to three boys, but an honorary mom to dozens more. For more than 20 years, she’s been a bus driver in her community, taking extra steps to make sure every kid she drives is well taken care of, like buying one student a new pair of shoes, and also enforcing a strict no-bullying policy. One student told “Good Morning America” that Campbell is like an “extra mom” to everyone who rides her bus. Read more.

Homemade Bird Nests Will Warm Birds and Your Heart

Every year the Carolina Waterfowl Rescue in Charlotte, North Carolina asks for knitted or crocheted nests for their rescued baby songbirds. This year, the post they put together calling for donations went viral, and the rescue has received more homemade nests than ever, even from places as far away as Seattle. How many nests is too many? According to rehab specialist Bayleigh MacHaffe, the limit does not exist: “We could always use a little bit more and even if we don’t use them we can send them to other people who we know that do need them.” Read more.