Buddy Mercury: the Dog Can Play the Piano and Sing 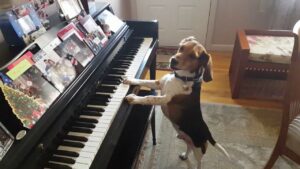 Buddy Mercury, who is aptly named after the late great Freddie Mercury, is a beagle/basset hound mix with a musical gift. Known as “The Piano Dog,” this pooch from Long Island tickles the ivories with his paws and can sing too! Thousands of fans on social media watch Buddy pound the keys and howl along to the music. He even has an album, and half of the album sales go to animal shelters. Read more.

For 12 years, Tinney Davidson from British Columbia has been waving hello to students on their way to school from her front window. Soon, the enthusiastic 88-year-old will move into an assisted living facility, so the local students decided to wave goodbye in the most extravagant way possible. Four hundred students from Highland Secondary School, which is located near Davidson’s house, wished her goodbye by gathering on her lawn and bringing flowers and posters. About this show of gratitude, Davidson says, “I was shocked again that’s there’s so many kids that want to say goodbye to me.” Read more.

Pope Francis has just donated $500,000 in aid to migrants in Mexico who are looking to cross the border into the United States. This money will go towards housing, food, and other essentials in 16 Mexican dioceses. Around 75,000 migrants from Honduras, El Salvador, and Guatemala are stranded in Mexico after fleeing poverty and violence in their home countries. The Catholic Church houses thousands of these migrants who are unable to gain entry into the United States. Pope Francis’ generosity is a show of compassion as he continues to criticize harsh immigration policies and border walls. Read more. 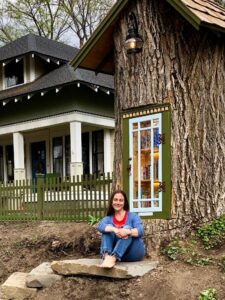 When Sharalee Armitage Howard had to cut down the dead cottonwood tree in front of her Idaho home, she wanted to honor the tree she loved in a special way. She transformed the tree stump into a Little Free Library with help from her family and friends, and it now looks like something out of a fairy tale. Its magical aesthetic made the tree library go viral on social media, and many praised Howard for her creativity. At the Little Free Library, members of the community can take out books as long as they add new books to the shelves. Hundreds of regulars now frequent the library, and if you visit, maybe you’ll even see an elf or two! Read more.

A South Korean school’s first grade class is made up of grandmothers who are learning to read and write for the first time. Daegu Elementary in Gangjin County, South Korea, is one of many rural schools facing an uncertain future due to low birth rates and residents relocating to cities. With such low enrollment, the school opened its doors to older female villagers who never had the chance to go to school. 70-year-old Hwang Wol-geum, who was not allowed to attend school as a child because she was a girl, is now enrolled in the first grade. Once she learns to read and write, Ms. Hwang plans on running for president of the village women’s society. Read more.