Meet the Man Who Saves Animals By Making Prosthetic Limbs 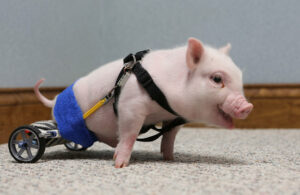 Derrick Campana is a true superhero, as he is responsible for saving the lives of more than 20,000 animals. Derrick began his career making prosthetic limbs for humans before transitioning to an animal orthotist. Now, he makes custom braces and artificial limbs for all kinds of animals, including dogs, birds, horses, sheep, camels, gazelles, and elephants! Campana explains that even though it might seem as though an animal is content walking on three legs, hopping around takes a toll on its body. Campana is one of just 10 people in the world who creates prosthetics for animals, and he hopes the attention his work is getting will continue to help animals in need worldwide. Read more.

Four-year-old Cooper Baltzell enjoys mopping his house because he wants to be like his best friend. Cooper, who has Hirschsprung’s disease and is frequently in and out of the hospital, was a patient at the University of Minnesota Masonic Children’s Hospital, where he befriended Gregory Watson, the janitor tasked with cleaning Cooper’s room. The friendship blossomed when Cooper asked Gregory to join him on a walk to the hospital popcorn machine. The two have been inseparable ever since. Thankfully, Cooper is now out of the hospital, but Gregory hopes that Cooper will pay him a visit some time just for fun. Read more.

This past Easter, a church in Wichita, Kansas took Jesus’ message of forgiveness to heart and forgave $2.2 million of medical debts for the people of Kansas. Pathway Church pooled together money and worked with RIP Medical Debt, which purchases medical debt for pennies on the dollar, to pay off the medical bills of local residents. Thousands of unsuspecting Kansans opened their mailboxes to find a letter saying, “We’re Pathway Church. We may never meet you, but as an act of kindness in the name of Jesus Christ, your debt has been forgiven.” Read more. 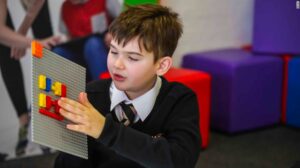 Lego has created a fun way for kids with vision loss to play with Lego bricks and learn braille at the same time. The 250 bricks in the Lego Braille Bricks set will feature the braille alphabet, numbers from zero to nine, and math symbols. With the rise of audiobooks, fewer blind and visually impaired people are learning Braille, even though Braille users are typically more independent and receive better employment opportunities. Lego hopes that their Braille Bricks will encourage visually impaired kids to learn the language in an enjoyable and creative way. Read more.

Flo Filion Meiler is living proof that age is just a number when it comes to sports. The 84-year-old athlete has participated in track competitions for 20 years now. She is a champion in her age group (80-85), and has won gold medals in the pole vault, relay, pentathlon, high jump, and hurdles. While representing Team USA at the World Masters Athletics Championships Indoor, she won the gold medal for the high jump. Meiler is currently training for the National Senior Games and hopes to break new records as she enters into the 85-90 age bracket. This senior citizen is truly an athletic force to be reckoned with! Read more.