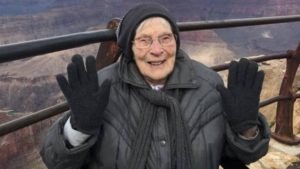 Despite being three years older than the park itself, Rose Torphy, age 103, just officially became a junior park ranger. She hopes that her efforts and the efforts of like-minded conservationists will preserve the canyon she loves dearly for years to come. Her goal is to teach kids how important it is to protect the natural beauty of the park, keeping a legacy alive for future generations. Read more.

Scientists from Yangzhou University in China have developed a material that they claim could bring cheap, clean drinking water to those in need. Using only sunlight and some 2D materials, the scientists were able to eliminate 99.9999% of water’s bacteria, including E. Coli. Similar processes usually take more than an hour to do the same task. This has huge implications for at-risk populations struggling with water shortages. Read more. 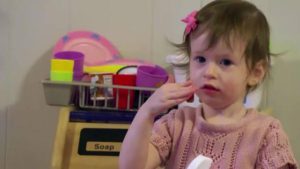 After learning of the social struggles of a deaf 2-year-old in their neighborhood, this community took it upon themselves to learn American sign language (ASL) as a group. The young girl, Samantha Savitz, lives in Newton, Massachusetts with her parents Glenda and Raphael, and loves to chat with people in the neighborhood. So, her neighbors got together, hired an instructor, and are learning together. Samantha’s parents are inspired by their neighbors’ dedication, and hope it will help Samantha grow up in a safe, supportive environment. Read more.

Inmates in Florida were caught breaking into a car, but not for the reason you might think. They were rescuing a 1-year-old whose father accidentally locked his keys in the car with his daughter inside. The parents called deputies but were told that the situation wasn’t urgent enough for them to break the window, and the parents were unable to afford a locksmith. That’s when a group of nearby inmates who were part of a work crew stepped in. In the video, inmate David Freyn, wearing his striped prison jumpsuit, can be seen using a coat hanger to unlock the door, while other inmates pull the door open. The baby was saved and the car was left undamaged. Read more.

An 87-year-old great-grandmother from Pennsylvania was reunited with her brother who was put up for adoption when he was 3 months old. Betty Housseal’s great-granddaughter, Brianna Nelson, decided to search for the man after years of her great-grandmother wondering what became of him. Nelson turned to Facebook for help, and people began assisting her in her search for Housseal’s brother. Nelson eventually found and contacted him, and her great-grandmother was overjoyed to learn that he wanted to meet her. The two long-lost siblings were able to meet up after seventy years. Housseal finally gets to be a big sister and says, “Now if I go, I know I am all right.” Read more.