Inmates and At-Risk Dogs Teach Each Other About Unconditional Love 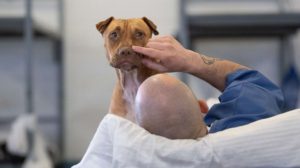 Inmates in Florida are receiving rehabilitation in the form of puppy love. The TAILS program allows inmates to help train at-risk dogs who were rescued from dog-fighting rings and abusive homes. Being a part of this program is a reward for inmates, and it also works to teach them patience, trust, and of course, unconditional love. Over 500 dogs have successfully completed the program, and after they “graduate,” they are put into foster or forever homes. This program not only saves dogs who are at risk for euthanasia, but it also provides inmates with a sense of love and responsibility that many of them have never experienced before. One such inmate was inspired by his work with the dogs to become a veterinary technician upon his release. Read more.

Alfonso Garcia is the L.A. Rams’ beloved custodian, and the team decided to surprise their favorite unofficial team member with two tickets to the Super Bowl. In a video, Rams’ wide receiver Brandin Cooks is seen telling Garcia that the general manager wants to see him. Cooks reassures him that he isn’t in trouble, but that on behalf of the team, he would like to bring Garcia and his son to the Super Bowl with them. Garcia then becomes emotional, saying that it has been his dream ever since he was a little boy to go to the Super Bowl. Cooks tells Garcia, “You mean so much to us and everything that you do does not go unnoticed.” Read more.

Yalitza Aparicio is the very first Indigenous Mexican woman to be nominated for an Oscar. Aparicio had never acted before when she auditioned for the role of Cleo in Alfonso Cuarón’s critically-acclaimed film, “Roma.” Aparicio’s role in the film has sparked a conversation about the way Indigenous Mexicans and domestic workers are treated. This subject of the film is especially close to the actress’s heart because her mother was a domestic worker, and she embraced the role of Cleo to make her mother proud. A She hopes that her mother will be able to accompany her as her date to the Hollywood’s biggest night. Read more. 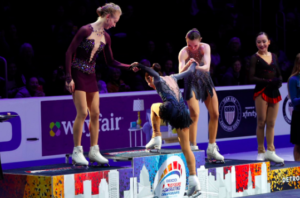 At just 13 years old and standing 4’7”, Alysa Liu made history as the youngest U.S. figure skating champion ever. She broke a records and wowed the crowd by landing two triple axels, an extremely rare feat. Liu appeared shocked when she saw her free skate score of 143.62. In  an extra show of camaraderie, the second place and third place winners helped the young champion onto the podium to be crowned winner. Liu has her sights set on the 2022 Olympics, when , she’ll be 16 and eligible to compete. Read more.

Man Saves Woman With Help from ‘The Office’

As any superfan of the “The Office” knows, CPR should always be conducted according to the beat of the Bee Gees’ song “Stayin’ Alive.” For 21-year-old Crossley Scott, who coincidentally shares a last name with the show’s infamous Michael Scott, long hours of binge-watching the series finally paid off. As the young man test-drove a vehicle outside of the auto shop where he works, he noticed a woman slumped over the wheel. He ran over to help, and when he felt no pulse, Scott sprang into action and performed CPR as he had seen it on the show.  The woman revived and was treated at a local hospital, where she was shortly released. Read more.