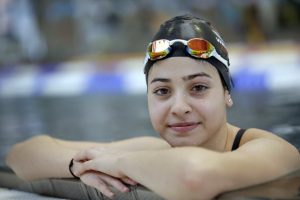 Swimming for Her Life

The world’s best athletes are looking for gold in Rio, but one swimmer already swam the race of a lifetime — a race for her own life. Eighteen-year-old Yusra Mardini helped to save the lives of 20 refugees on their way to Greece from Turkey in a motorboat. Mardini and the others were fleeing war and violence in Syria when the boat’s motor failed, and it began to sink. Mardini, her sister, and a few others aboard the boat jumped overboard and swam for three hours, pulling the boat to safety. Mardini is part of #TeamRefugees at this summer’s Olympic games. “I want everyone to think refugees are normal people who had their homelands and lost them not because they wanted to run away and be refugees, but because they have dreams in their lives and they had to go,” she said. Read More.

When asked what he wanted for his birthday, 10-year-old Gunner Robinson said he wanted to help others. It all started when his family sponsored a child at Christmas and Gunner was struck by the fact that the girl didn’t have shoes. He wanted to help other children like her. So instead of presents, Gunner asked people to donate shoes that he could then give to children in need. This is his third year asking for shoes instead of presents, and he has even started his own organization, which he calls “Gunner’s Runners.” Gunner shows us that you’re never too young to make a difference. Read more.

Pasta with a Side of Humanity

When police officers in Rome arrived at the home of Jole, 89, and her husband Michele, 94, after reports of sounds of distress from neighbors, they were unsure of what they would find. Thankfully, the couple was safe, but lonely and in need of some TLC. The officers cooked the elderly couple pasta for dinner. The special ingredient, said the police department, was humanity. Read more.

There’s been a lot of talk this week about winning “Olympic Gold,” but what about the people who don’t win? Although all professional athletes are competing to win, American cyclist Mara Abbott reminds us that medals aren’t everything. The cyclist thought she was about to win the women’s road race in Rio when three others raced past her seconds before the finish. Abbott placed fourth but remains optimistic. “I rode that race to the absolute best of my ability, and I didn’t leave anything out there”, she said. Abbott shows us that we should take pride in all our accomplishments, winners or no. She should receive a gold medal for her positive attitude! Read more. 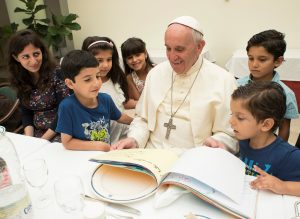 Pope Francis Has Lunch with Refugees

Continuing to show the world what it means to be a Good Samaritan, Pope Francis dined with Syrian refugees at the Vatican this week. The pope had lunch with 21 refugees in his private residence, including the Syrian families the pope brought back to Italy with him after a trip to the Greek island of Lesbos in April. Several children of refugee families brought the pope drawings to enjoy. Read more.