‘Hamilton’ Star Is Not Throwing Away This Shop 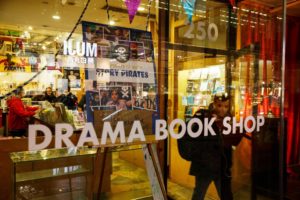 Lin-Manuel Miranda, along with his “Hamilton” collaborators, decided to save a beloved NYC bookstore by purchasing it after the rent got too high for its 84-year-old owner. The Drama Book Shop is a landmark in the New York City theater district, and aspiring playwrights have frequented the store for more than a century. Miranda and his three now co-owners all spent time in the shop before earning success on Broadway. This is another win for independent bookshops, which have recently seen a rebirth, despite competition from online booksellers. The UK welcomed 15 new independent bookshops after many years of bookshops disappearing, and New York bookshops seems to be on a similar path. The Drama Book Shop will reopen at a new, more affordable location in Midtown Manhattan on January 20th. Read more here and here.

Sarah Gomez-Lane, a 6-year-old from Virginia, was awarded a $30,000 scholarship after winning the annual Doodle for Google contest. Sarah was inspired by her dream to become a paleontologist to draw a “doodle” depicting dinosaurs. Google artists then worked with Sarah to animate her doodle. Sarah’s work was featured on the Google homepage for 24 hours, where users could watch Sarah’s dinosaurs come to life. Google says that they picked Sarah out of 182,000 contestants because they were “blown away by her big (you might even say dino-sized!) ambitions for her future, especially at her young age.” With $30,000 for college already under her belt, Sarah’s is on the way to making her dream reality. Read more.

A 13-year-old yoga instructor is proving that age doesn’t have to limit you. Natalie Asatryan has had a passion for yoga since she was 5 years old, and now is the youngest certified female yoga teacher. At just 9 years of age, Natalie decided that she wanted to teach yoga, but no studio would accept her, claiming that she was too young. When she turned 12, she finally got the chance to join a studio,  and she now teaches classes to people of all ages and donates all proceeds from her classes to charity. Natalie even got to meet and learn from the world’s oldest yoga instructor, who is 100 years old. Read more. 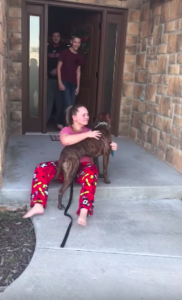 After being told by her parents that she could not adopt a dog until after college, Oklahoma State University sophomore Hallee Fuqua began volunteering at the Humane Society of Stillwater to help pass the time. She quickly formed a bond with a 2-year-old pooch named Rambo, often sending her parents photos of her favorite pup. When Rambo was adopted, Hallee was heartbroken to think that she would never see him again. Little did she know that her own parents had adopted the dog! Hallee and Rambo reunited a week before Christmas, and Rambo is now living happily in the Fuqua home. Read more.

From Homeless to Happiest Bus Driver in London

Bus driver Patrick Lawson has just been awarded the Hello London Award for outstanding customer service at the London Bus Awards. Four years ago, Patrick was in a much different place. After spending time in prison, getting involved with drugs, and ending up homeless, the Londoner, with help from charities, got back on his feet and found meaningful work as a bus driver. “I want to greet every single person when they come on the bus and when they leave, and I have done that from day one with a big smile,” Lawson says. Read more.